Play the "gender card," Hillary: Why being a woman gives Clinton unique insight on economic issues 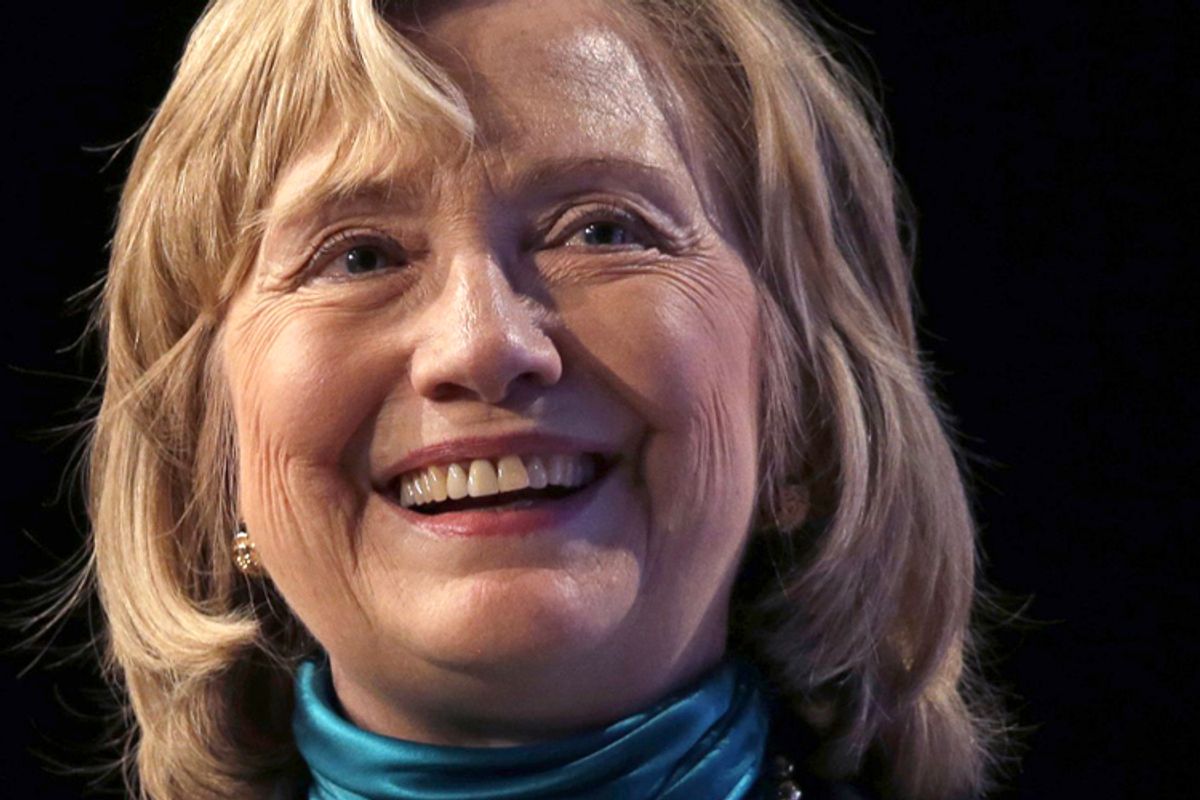 But that isn't a reason to punt on inequality, and the historic nature of Clinton's candidacy could give her an advantage in an election where virtually every candidate will be pushed to talk about it. Clinton is a woman (major spoiler alert), and women are disproportionately affected by a stagnating minimum wage, the absence of paid family and sick leave and repeat cuts to social programs that benefit working families.

There is also nothing “inevitable” about Clinton, as Rebecca Traister wrote this week in a wonderfully nuanced piece over at the New Republic. Clinton, especially early in her career, knows what it’s like to be a woman trying to get a foothold in a boys' club, and she knows what it’s like to be treated like shit in the process. Most women's lives don't look a thing like Hillary Clinton's, and her record on economic issue is beyond spotty, but there's still some common ground to be found if Clinton talks explicitly about the many ways the deck is stacked against working women and introduces the policies to back that up.

Rather than make an absurd claim about being “dead broke” after leaving the White House as a way to relate, Clinton would be well served to point to her experiences coming up in the boys club of law and politics and say to women, I know it's a fight.

Women experience higher rates of poverty than men in every single state in the country. A report released last week by the Institute of Women’s Policy Research found that 15.5 percent of women live in poverty in the United States, compared to 11.9 percent of men. Women of color are particularly economically vulnerable, with Native American, Hispanic and Black women facing a poverty rate that is double what white women experience.

The production of mass poverty isn't the kind of thing that can be addressed by a single policy, but calling for a major bump to the minimum wage is among the most straightforward ways to start. The idea of raising the federal minimum is overwhelmingly popular with voters of both parties, and boosting it would be transformative policy for millions of working women.

As I have written so many times before that it is beginning to feel terribly redundant, women account for two-thirds of the minimum wage workforce. An attack on the minimum wage is an attack on women’s earnings, a raise is a small step (a too small step) toward helping women survive on something more than poverty wages.

Clinton has paid lip service to raising the wage, but hasn’t offered a concrete number she would support. This is something that pressure from a public that overwhelmingly supports the move and a labor movement that has successfully pushed the national consensus could and should trigger Clinton to get more ambitious about. Elizabeth Warren isn't running this year, but she should haunt Clinton as she tries to hash out her economic agenda during the primary.

But even if Clinton were to propose an extremely ambitious federal minimum wage, like, say the boost to $15 being called for across the country, elevated wages alone aren’t enough to level the playing field for working women. Which is where a federal paid family and sick leave policy comes in.

Having a kid shouldn’t be grounds for losing your job or spiraling into poverty, but without a federal paid family leave policy, that is what it amounts to for millions of working mothers. Clinton said last summer that she supports paid leave but doesn’t know if it’s politically possible, but has warmed her position in recent months.

During September panel at the Clinton Global Initiative, Clinton said childcare and paid time off were central to any conversation about women in the workforce:

The absence of quality affordable childcare is a very big factor in limiting and sometimes ending women’s participation in the workforce. The absence of paid leave is a strong signal to women and particularly mothers that the society and our economy don’t value being a mother.

If we did more for childcare and we did more on paid family leave, particularly for new mothers, we would be sending the right signals.

It was during the same panel that Clinton pulled in a little of her own experiences to bolster the point. “When I was a young woman, there were colleges I couldn’t go to, scholarships I couldn’t apply for, jobs that had basically invisible, but very clear signs saying ‘no woman need apply,’” she said. Talking about what's changed in the last 20 years she said, “We’ve gone from 77 cents to 78 cents compared to a dollar [in the gender wage gap]. That’s hardly groundbreaking progress.”

The Clinton of today is a millionaire many times over, but she was once an ambitious young woman who wanted to get a foothold in a male-dominated world that was all but closed off to her. Clinton is hawkish, maddeningly centrist on most issues, supported welfare "reform" policies that worsened poverty for millions and remains deeply entangled with and protective of Wall Street interests. There are many reasons not to vote for her, but that doesn't mean she shouldn't be pushed to articulate a progressive economic agenda, account for her previous record and advance a platform of what can and needs to change.

Clinton is a woman of tremendous privilege, but she’s also shown herself to be a fighter in the decades she’s spent grabbing a spot at the table. She would be well served to campaign as someone who will bring that same tenacity to working women. She may be playing the gender card, but that’s only because it’s the hand she’s been dealt.