The political press waits with bated breath for candidates to lay out their ideas. Here's why ideas don't matter 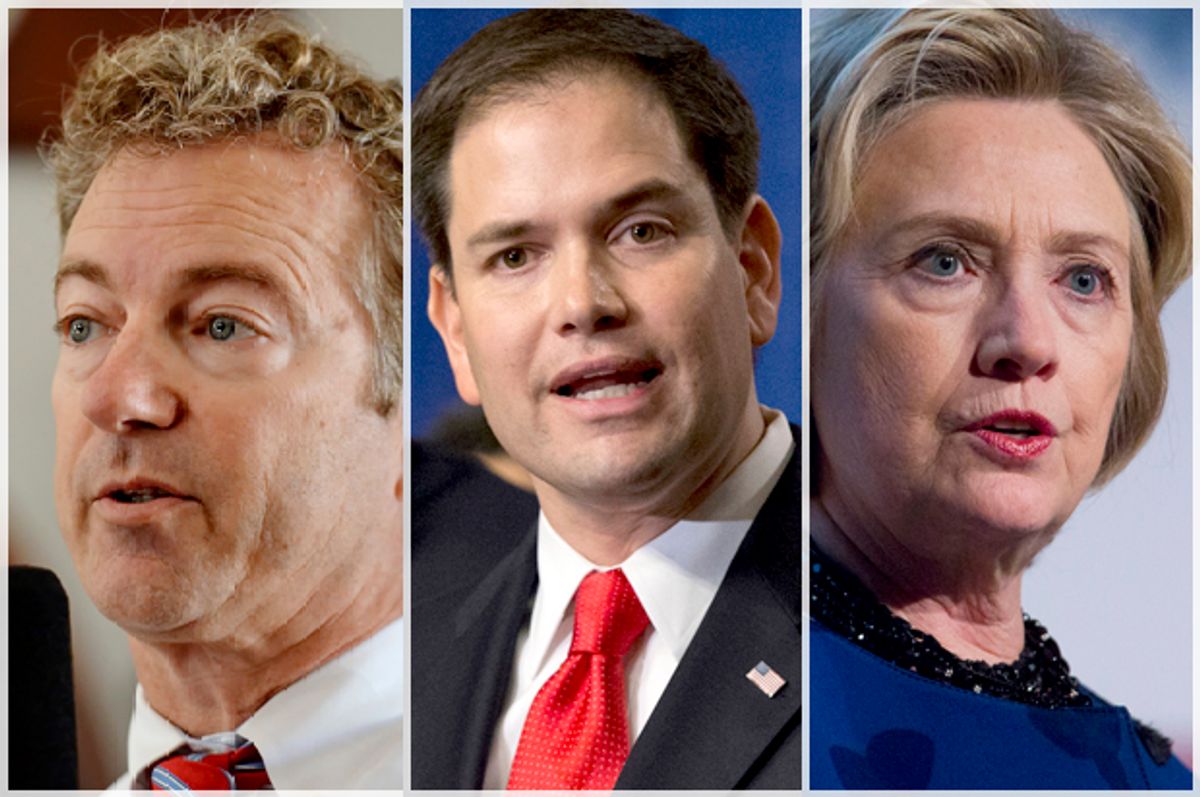 As the presidential campaign of 2016 begins, pundits and the public are waiting for each candidate to roll out her or his detailed ideas about foreign and domestic policy.

But why? Why should candidates for the presidency be expected to present detailed policy agendas?

How foolish is it to expect candidates for the White House to present their own highly specific lists of policy proposals? Let me count the ways.

The candidates are constrained by their parties. Presidential candidates must avoid alienating the partisans who vote in the primaries while appealing to swing voters in the general election. Because you have to win your party’s primaries to be your party’s nominee, nobody expects any successful major-party nominee to deviate much from the orthodoxy of the party’s base. Sure, a candidate may demonstrate a degree of independence by dramatizing his or her difference with the party line, as Bill Clinton did with the Sister Souljah issue in 1992. But a candidate who engages in excessive sacred-cow-tipping will not be the nominee in November 2016. The odds that a major-party candidate will put forth a totally original and controversial idea are slim to none, and Slim has skipped town.

Presidents are constrained by Congress. Much political commentary and public debate seems to assume that the president is all-powerful. But while the president proposes, Congress disposes. By strategic use of the veto power, a president can shape legislation—but only up to a point. A presidential candidate’s detailed policy positions are at best polite suggestions to the barons of the House and the grandees of the Senate, who will decide what does and does not become law.

Groundbreaking new policy ideas don’t originate with major-party presidential candidates. Independent or third-party candidates sometimes run for the White House to publicize particular causes, like Ross Perot or Ralph Nader. But major-party candidates are unlikely to introduce significant policy reforms into public awareness and debate for the first time. On the contrary, the adoption by a presidential campaign of a transformative idea is likely to be the end of a long process, in which the idea migrated from the margins to the center of policy advocacy in one of the two parties.

We Americans are taught that Lincoln responded to the crisis of the Civil War by reforming national banking, building the transcontinental railroad, and passing homestead and land-grant college legislation. And many seem to believe that the major programs of the New Deal were thought up by President Franklin Roosevelt and his aides and advisors in response to the Depression. In reality, both presidents passed reforms which had been bottled up in Congress for years or decades, until a crisis—the Civil War, the Great Depression—broke the logjam. The Lincoln Republicans enacted much of the agenda of the older Henry Clay Whigs, which had been thwarted by Southern legislators for a generation. Most of major reforms of the New Deal—federal deposit insurance, the eight-hour day, unemployment insurance, what became Social Security—had been pushed by decades by reformers, since the nineteenth century in some cases. The election of Franklin Roosevelt and Democratic congressional majorities enabled these policies to be enacted. But the ideas did not originate with Roosevelt’s 1932 campaign.

Good presidents are not policy wonks. As Chris Matthews has pointed out in the past, if presidential candidates are going to be quizzed about details of public policy during debates by journalists, the candidates should be permitted to refer to notes. Why should a presidential campaign be a test of the ability to memorize budget numbers and foreign capitals? It’s a campaign for the office of chief magistrate, for God’s sake, not the SAT or “Jeopardy” or a qualification test for MENSA.

Presidents should be well-informed enough to have good judgment in knowing which experts and intellectuals to listen to—and which to ignore. But they should not be narrow experts or creative intellectuals themselves. They commission and study reports, they do not research and write them.

Two of the worst presidents in U.S. history were arguably the most accomplished intellectuals to live in the White House—Thomas Jefferson and Woodrow Wilson. Like many great thinkers, Jefferson and Wilson were afflicted by intellectual vanity, manifested in an unwillingness to admit the failure of their pet theories. During the Napoleonic Wars, Jefferson stubbornly insisted on persisting in his economy-wrecking embargo of both Britain and France, rather than admit that his theory that those two powers depended on American markets and exports was mistaken. Woodrow Wilson allowed the U.S. Senate to vote down the treaty that would have enabled U.S. participation in the League of Nations, rather than compromise and allow amendments which would have secured its passage.

Neither George Washington, Abraham Lincoln nor Franklin Roosevelt, intelligent as they were, could have become President of Princeton University like Wilson or engaged in scientific debate with French naturalists like Jefferson. Unlike Jefferson or Wilson, these great presidents were not in love with their own theories—and they knew how to use individuals smarter than they were in various ways to advance their goals for the nation.

Candidates who run on their experience, rather than their bold and detailed visions of public policy, are out of fashion. We are told, for example, that Hillary Clinton and Jeb Bush must offer striking new ideas. They can’t run on their resumes.

But why can’t they and other candidates run on their resumes? The Founders designed the electoral college originally to ensure that nobody would become president without having achieved a national reputation, by going through the cursus honorum of a long career in local and state politics, the House and Senate, and perhaps one or more Cabinet positions or the vice-presidency. In other words, the U.S. was intended to have a semi-parliamentary system in which presidents were well-known figures who had served with distinction in a number of prominent offices before assuming the highest office in the land. And that is how it worked for most of history. It is only since the public backlash against the Watergate scandal that posing as an outsider and running against the Washington establishment has become the norm.

How’s that whole outsider-president thing working out? Jimmy Carter, perhaps the first outsider president in modern times, was ineffectual and at odds with much of his congressional party. As the leader of the rising conservative movement, Reagan enjoyed more success. But both Bill Clinton and Barack Obama, the latter of whom had served only one term in the Senate, paid a price for a lack of Washington experience and personal influence in Congress. The last great liberal president, Lyndon Johnson, was far more successful, in part because he had spent virtually his entire adult life in the House and Senate.

And then there was George W. Bush. He had been governor in Texas—but thanks to its Reconstruction-era state constitution, which restricts executive authority, the Texas governor is a largely powerless figurehead, like the Queen of England. The Texas legislature is dominated by the Lieutenant Governor, while many executive offices in Texas are independent of the governor.

This means that, in effect, when George W. Bush was elected as president of the United States, it was the first real executive job of his adult life. The results should have surprised nobody.

The last argument against presidential policy wonkery is the strongest.

Who knows what the future holds? In 1932, neither Franklin Roosevelt nor those who voted for him expected him to serve four terms, preside over the greatest social and policy revolution since Reconstruction, and guide the United Nations alliance to victory in a second world war. Presidents today can only serve two terms, but the element of surprise is still present. The focus of George W. Bush’s early foreign policy was on China. Then came 9/11. His successor Barack Obama hoped to reset relations with Putin’s Russia and wind down U.S. involvement in the Muslim world. History had other ideas.

What is true in general is especially true of presidential campaigns: If you want to make God laugh, tell him your plans.

You can speak of the reforms you and your party favor, in broad, thematic terms. But don’t bother to cost out specific budget proposals to the ninth decimal and show their impact on the budget for the next 75 years. We understand that all of that is fantasy football.

And if you mispronounce the name of an obscure foreign leader, or get a particular defense program wrong, we’ll forgive you. When you’re president, you’ll have the State Department and the Defense Department to help you with things like that.

In 2016 we Americans will vote for a head of state, a chief magistrate, and a commander in chief. We will not be electing an accountant or a professor.