"Game of Thrones" star Aidan Gillen on Littlefinger's weakness for Sansa Stark: "She's playing him as much as he's playing her" 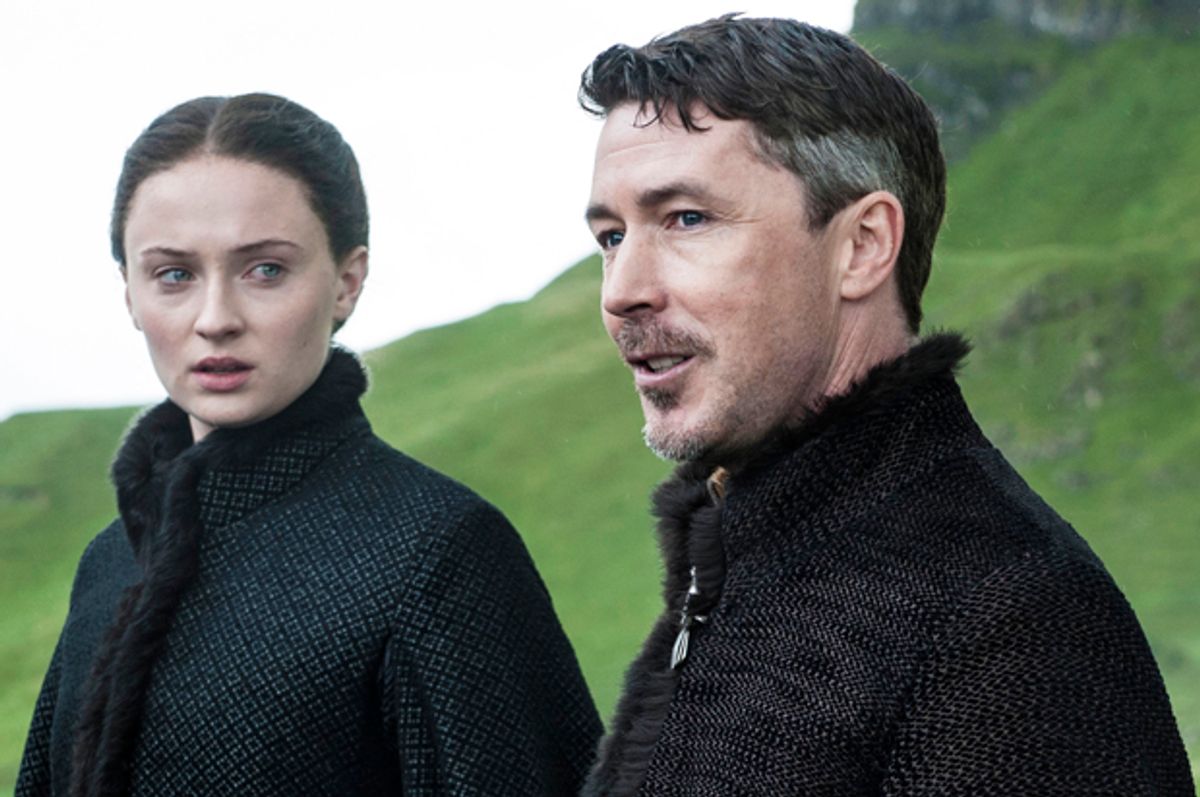 Lord Petyr Baelish -- a.k.a. Littlefinger -- is one of “Game of Thrones”’ most compelling and unpredictable characters. Unlike his high-born, convention-bound peers, Littlefinger is a total wild card: A devious puppet-master, constantly tweaking the strings backstage at the great Westerosi puppet show.

Yet it’s a testament to the actor playing him -- the great "Queer as Folk" and "Wire" alum Aidan Gillen -- that Littlefinger is never just one thing. While the self-made schemer certainly has plenty of blood on his hands — King Joffrey, Jon and Lysa Arryn, and who knows how many others — he also appears to have a softer side, one we're starting to see hinted at via his complex relationship with the young Sansa Stark. In the premiere, the pair embarks on a journey to an unspecified location, and their ambiguous dynamic bring up more questions than answers: Is he simply using her as a political pawn or does he really care for her? Is she more like a daughter to him or a potential lover, or simply a living reminder of her dead mother? Or, as is often the case with "Game of Thrones," are things much more complicated than that?

We caught up with Gillen to chat about Littlefinger’s designs on the Iron Throne (he swears has none), his feelings for Sansa (they’re real!) and whether he’s worried about getting killed (no — he’s looking forward to it). The interview has been lightly edited and condensed for clarity.

What has it been like shooting the romantic aspects of the Littlefinger/Sansa relationship?

It's interesting — a lot has been made of us. I don't see it as a particularly romantic relationship though, you know? But I can see why that would be. Obviously in season four there was a very specific moment where Littlefinger kissed Sansa, but that was as much to provoke a reaction from Lysa as anything else; it was a very particular play. There was something in the moment about it but it was also a device -- staged, in a way, for effect. Sansa is quite young, but in the world of “Game of Thrones” that's not as unusual or outrageous a coupling, compared to Margaery and Tommen.

There's a lot of weird couples, for sure.

There are a lot of weird couplings and that's something that's based on a mirror of medieval society. "Of age" is quite young; you started having kids and all the rest of it. Sophie is a really good actor so I don't really think of her as being a kid. She is 19 and she's been doing this for a number of years. I myself started out quite young; when you're working, professionally, even if you are in your teens, you just want to be treated the same as everybody else. You just want people to see you as an actor and not as a kid. I don't think there's anything uncomfortable about this because I don't see it as a creepy relationship.

What do you think the nature of their relationship is?

I honestly see it as kind of a mentoring... He's a mentor and Sansa's a pupil. Obviously, her mother was one person that Littlefinger had feelings for and that he wanted to be with, so there are echoes of that in there, but he's not after her. He's not grooming her. She's playing him as much as he's playing her. They're both getting something out of it.

Do you think he genuinely cares about her?

Yeah. I know that because I'm playing it. Absolutely. I think there's a genuine benevolent side to Littlefinger. There's nasty things and harsh things but there's a caring person there as well, somewhere. He cares about himself, I mean, of course. I’m not saying Baelish is a selfless person, but these characters on “Game of Thrones,” there’s lots of time -- we’re entering our 6th season, so there's plenty of time for people to throw different shades onto things. It's always good when you're surprised by somebody's spontaneous nastiness or niceness. There's room for that with Baelish as much as anyone else.

He does seem to have this genuine kindness to him just like we saw come out with Jamie Lannister. That's kind of the thing with “Game of Thrones” — nice characters do horrible things and horrible characters do nice things and everyone comes in many shades of gray.

How much has been revealed to you about your character's ultimate agenda?

No, it's not good, because then you're not playing it. I don't want to know. I feel like that in real life— I don't want to know what happens tomorrow or next week or next year. I have several ideas running through my head; scenes with say, Sansa or with Cersei. There are later scenes where Littlefinger interacts with people apart from Sansa later in the season. He does have meticulously laid plans and it's not just happenstance, you know what I mean? It's well laid out. The one relationship where there really is a propensity for spontaneity is with Sansa Stark, though, where real feeling could get in the way. There is a humanity there, for better or worse. Let's just see what happens about that...

There's been a lot of discussion about how the show is diverging from the plot of the book, particularly with the Sansa storyline. What did you think of these choices as they were revealed to you?

It's exciting. Littlefinger was barely in the last book— if at all— and even in season 4, there were some events in there to keep characters either visible or invisible if we'd had too much of them or if there were too many characters. I think it's exciting that we've reached this point where nobody actually knows what happens next. Up to this point, you could read the books, you could find out what happens because it was there; it was written, and now it's not, and that's an exciting thing. Obviously, there's an issue of whether the show overtakes the books, et cetera, but I think it's a good thing that George Martin is involved in production as he is— he's a producer and one of the writers, so it's not like we're totally disconnected from what's going on in the mind of George Martin. But, you know, for the viewer and for the actor, it's exciting. We just genuinely don't know what happens next so you do have some free rein. What's your reading of that?

I think George R. R. Martin has told Weiss and Benioff which threads are important to keep in-tact and they have license within that, but like you've mentioned, it really is such an interesting cultural phenomenon. The TV show has taken a life of its own and that's very cool.

It's been a big adventure playing the characters as loyal— and the show has been pretty loyal— to the books, to the point that I don't think anyone could fault the show writers and creators for running away with George Martin's work and doing something else with it. They've been as loyal to it as they possibly can and now the only way they can be loyal to the audience and the characters is to do their own thing with it, in consultation with George Martin. But we don't know what that is! It's immensely exciting.

You often seem to get cast as very ambitious underdogs with a bit of a devious side. Is that a type you enjoy playing to?

Yeah it is, actually. I hope it's not all I'll ever do, but I know I've played enigmatic characters. For me, the good characters are people who get places, are devious, are cunning and tricky and hard to pin down. Obviously, if you play one and you do an okay job of it, that'll be on people's minds. I hope it's not all I ever do, but I do recognize that it's been... they're fun, you know? It's fun to play those kinds of characters.

Are you ever worried about getting the script one day and finding out you've been killed?

No, I'm looking forward to that, actually. I don't feel like it's going to happen any day soon, if it happens... [With “Game of Thrones”] there’s a sense of doom, of something really nasty on the horizon, always something -- beyond the wall, winter is coming, or whatever— just the sense of something on the periphery that's coming, that's doom-laden. But most of the characters are preoccupied with getting on with living, and not many of them are consciously preoccupied with death. Littlefinger had a moment at the end of season 4, where he’s talking to young Robin Arryn I think that was quite a banner statement when he said, "don't worry about your death, worry about your life." That's what matters. Stop worrying about it; get on with living.

Littlefinger had the great "chaos is a ladder" speech last season, too, which seemed to sum up so many of the themes of the show.

That was a pretty obvious summing-up of Littlefinger's theory and code. It was very cool to deliver that, I have to say. I have worked on a couple of these long-running shows before, and you know when you get a script it's never going to be all you or even 20% you, but maybe every two or three seasons something like that comes along, where if it's well written and you perform it okay, people are going to notice and remember it. You only need a couple of moments like that in a six-season run to make your presence known and then the character will be remembered and you'll be remembered.

Do you think your character's ultimate goal or desire is to end up on the Iron Throne?

No, I don't think so, that's never been on my mind. Close by, you know; there have been several moments where Littlefinger physically stands by the throne or touches it or looks at it and the camera's behind his head or on his finger, tracing the blades of the swords, or contemplating who should be sitting on it, or all the people who did sit on them and what happened to them and how it happened. It's certainly central to his drive, but sitting on it? That's too much and probably not so much fun. Maybe too dangerous, even for him. But close by and watching and controlling, and in some way involved. Perhaps not sitting on it is an even trickier position to be in, but also more intriguing.