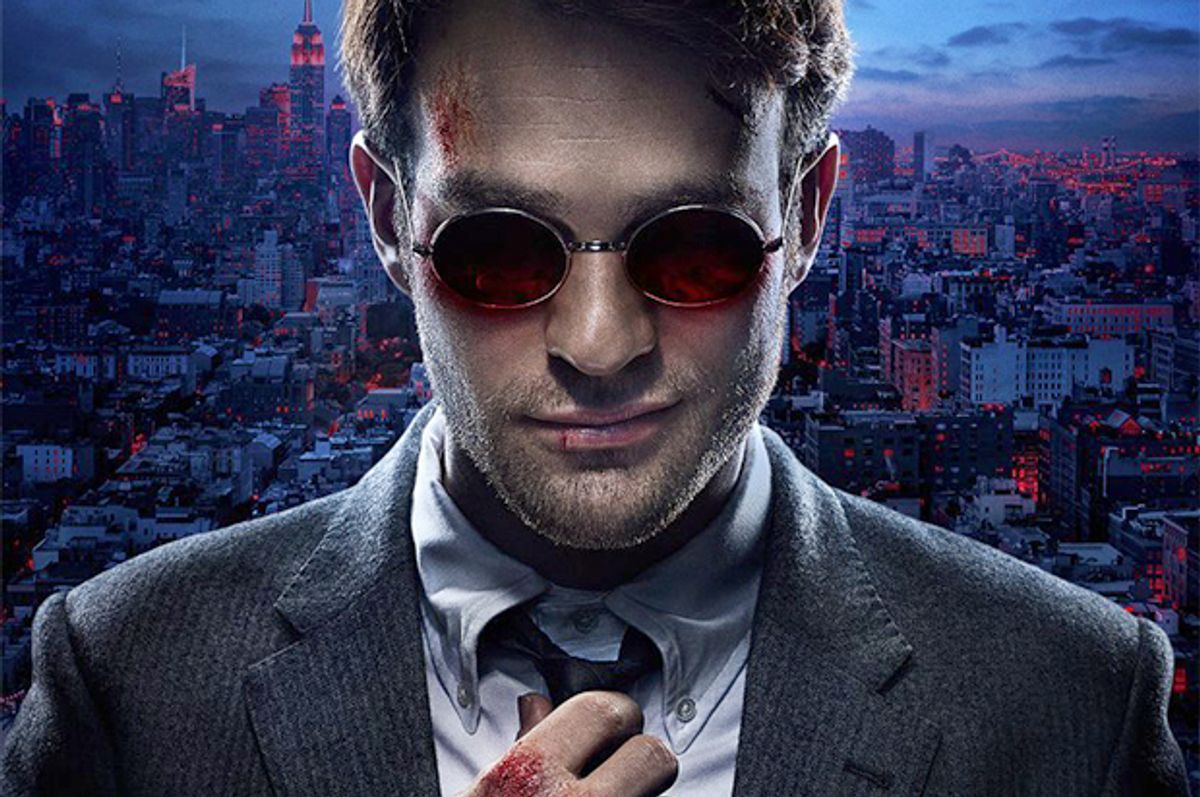 On Friday, Marvel released the first for four collaborations with Netflix, "Daredevil," which follows the trials of a blind lawyer who fights for the rights of the downtrodden in courtrooms by day and back alleys by night. The series superficially resembles Christopher Nolan's "Batman" trilogy, in that it presents a view of urban life whose grim determinism can only be defeated by a man in spandex. However, the quality of the visuals -- the pilot is directed by veteran "Mad Men" director of photography Phil Abraham -- and the series' complex moral calculus and dogged despite-it-all optimism set it apart from most contemporary comic fare.

Not everyone agrees with my assessment of the series. In her Washington Post review, Alyssa Rosenberg (disclosure: she's a friend and early supporter of mine) accuses the show of possessing a "sense of certainty about guilt or innocence [that] feels awfully out of step with the [current] moment."

"If the killings of black men, teenagers and boys that have gripped this country in recent years have taught us anything," she continues, "it should be that such fantasies of certainty are dangerous delusions." Rosenberg is correct that such fantasies can be dangerous -- and that the extrajudicial manner in which blind lawyer-cum-crime-fighter Matthew Murdock (Charlie Cox) acts them out strays dangerously close to George Zimmerman territory.

The comic book fan in me would respond by saying that the dangers of such fantasies are exaggerated by the fact that the series itself poorly communicates the powers its titular character possesses. In the second episode, Murdock says he can smell cologne from three floors away and hear a man breathing from across a city block, but there's no real effort to explain how that set of skills would enable him to figure out -- with absolute certainty -- whether someone is lying. And that's a significant omission, because Murdock's moral clarity is a function of his those powers. He claims on multiple occasions that he knows when someone is lying, but it's not because of some nebulous gut instinct -- being a human lie detector is one of his actual super powers, as he can sense changes in heart rate, galvanic skin response and the like.

But my real point of contention is one of scale. The larger argument the show makes is about the nature and necessity of different kinds of heroism -- and the kind of social responsibility they entail. "Daredevil" almost never strays from Hell's Kitchen, an area of New York City which, the audience is repeatedly told, was effectively demolished by the events in Joss Whedon's first "Avengers" film. The Avengers were responsible for repelling an alien invasion, which is highly commendable, don't get me wrong -- but someone has to pick up the pieces of the society that's shattered by the collateral damage, and that's what shows like "Daredevil" are explicitly about.

In fact, all of the shows Marvel will be producing with Netflix take place in this same small slice of the Marvel cinematic universe -- and all of them address the human cost of having your city host a Hollywood action sequence. This is something Hollywood itself has never done, and television only rarely. Even the closest, the third season of "Battlestar Galactica," had the feel of a reconstruction happening elsewhere, due to its visual and narrative references to Iraq.

Daredevil's certainty -- and the desire for it -- isn't a reflection on the world the audience lives in, but in the large cinematic one Marvel is creating. Which is, I acknowledge, something of a cop out. The work is produced and proving to be quite popular in a historical moment rife with divisions between the authority of those who govern and the people they are supposed to protect -- but in traditional noir fashion, the show is quite critical of the established authorities. "Daredevil" does not encourage viewers to kowtow to police, as the NYPD is institutionally and irrevocably corrupt.

As the University of Missouri's Andrew Hoberek, author of "Considering Watchman: Poetics, Property, and Politics," tells Salon, "Walter Scott and Mike Brown were not killed by vigilantes, but by police officers. 'Daredevil' the show doesn't exactly address the problems with police forces, including New York, that have made such shootings an all too common occurrence since last August. But it doesn't sentimentalize the police in the way that's common in American mass culture, and that prevents us from thinking critically about what they do."

"Daredevil" does, obviously, partake in its share of vigilantism -- but significantly, even though it occurs outside the law, the premise of the show indicates that it only does so when Murdock has exhausted all legal avenues of investigation. He successfully defends a contract killer, for example, in order to acquire more information about the shadowy underworld figure whose fingerprints are on every construction project in the city -- the Kingpin.

Which, I admit, isn't a perfect repudiation of the idea that the world the series inhabits is predicated on a black-and-white conception of morality, but it points to the series' investment in understanding the interstices of power in a world where Norse Gods and a Hulk can tear down half a city in half an hour.

Because as Hoberek notes, "the superhero comes into being at the end of the thirties, in the wake of the New Deal's greatest triumphs. We can see early superheroes as figures for the idea that people with power might work for the common good. What seems like the clear-eyed cynicism of the superhero-as-vigilante model might actually be complicit with the destruction of the welfare state."

"In this respect, Daredevil the character's charmingly retrograde system -- he won't intentionally kill, and doesn't like guns -- remind us of early Batman and can be seen as a will to reanimate the traditional notion of the superhero as defender of the public. This is very different from Nolan's Batman, who as a billionaire who seeks to remake the city in his image is more like Michael Bloomberg -- or, in what I think is the new series' most clever move -- like Vincent D'Onofrio's Kingpin."

Is the series flawed? Of course it is -- any attempt to criticize institutional rot and the effect it can have on attempts at civic improvement that involves a man in a fetish costume instead of narrative and aesthetic commitments along the lines of "The Wire" inevitably will. But what makes "Daredevil" compelling television is, I think, more the critique it levies at a Hollywood industry obsessed with destroying the world -- what was the final on-screen death toll in Zak Snyder's "Man of Steel," do you think? -- and utterly uninterested in what it is required to rebuild it. Perhaps that's just the kind of story television, with its small-scale, serialized narratives, is simply better equipped to handle.