A coalition of Republican women have introduced the toothless Workforce Advancement Act. Don't let it fool you 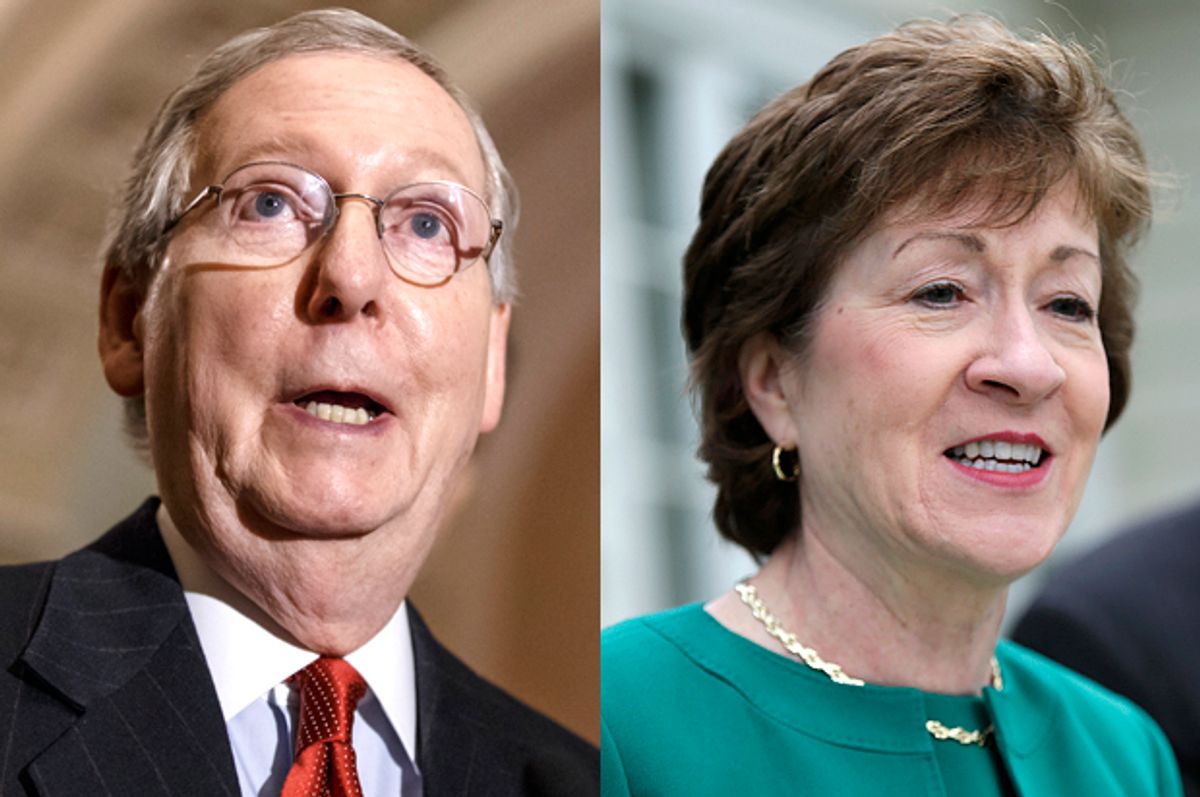 Equal Pay Day is supposed to represent how far into the new year a woman must work to earn what her male counterpart made in a single year. It also happens to be an annual opportunity to argue about the gender pay gap, if it actually exists or if women simply self-select out of the workforce because they like making less money than men. Because of this, Equal Pay Day is among the days I most want to be put into a medically-induced coma or otherwise sedated until it passes. (Others include: St. Patrick’s Day, the day of a distant cousin's bridal shower, the day I have to wash and replace my duvet cover.)

The disagreements over the extent to which pay disparities exist and the reasons that explain them often break down among partisan lines, though not always cleanly. Liberals tend to cite the 78 cents to the dollar figure as a broad strokes representation of a problem that varies across industries and is much bleaker for women of color and trans women. Conservatives tend to point to the economic price women pay for having children or acting as caregivers as something innate and voluntary, rather than looking at external policies and internal company biases as a possible explanation.

But as Laura Bassett at the Huffington Post reported Tuesday, a coalition of Republican women has done the heretofore unthinkable and inched closer to acknowledging a problem might exist by introducing their own version of the Paycheck Fairness Act, a measure that Democrats have repeatedly tried, and repeatedly failed, to pass.

But there are considerable differences between the two bills, the most recent of which is sponsored by Republican Sens. Deb Fischer of Nebraska, Kelly Ayotte of New Hampshire, Susan Collins of Maine and Shelley Moore Capito of West Virginia. The most significant among them is probably that the GOP proposal is toothless. The authors of the measure couldn't even bring themselves to concede that pay discrimination exists, only that some women feel it exists.

While the Democratic proposal is explicit about disparities between men and women’s earnings across income brackets and professions, the GOP bill simply states that “surveys suggest there is a concern among American women that gender-based pay discrimination still exists.”

If that hasn’t gotten your feminist blood pumping for the Workplace Advancement Act, consider this: The bill offers no legal recourse to women who may want to sue their bosses after finding out that they’ve been compensated at a lower rate than their male colleagues. This is a predictable omission, considering that the top Republican critique of the Paycheck Fairness Act is that it's bait for trial lawyers, a view shared by virtually every Republican running or looking to run in the 2016 primary.

The Republican measure is a tepid endorsement of the “concern” women may have about being discriminated against by their bosses. It also contains language stating that pay disparities are acceptable if they are about "merit" or "any factor other than sex," which, as evidenced by the slippery and subtle sexism on display in the Ellen Pao case, can be a difficult thing to argue against. (The Paycheck Fairness Act makes exceptions for pay differences based on "education, training or experience.")

The primary thing the two bills have in common is language making it illegal for employers to retaliate against employees who discuss salary information, and that’s about it. Cue the Beyoncé balloon drop! Let’s get Mitch McConnell to stand in front of that FEMINIST sign!

"Any legislator -- Republican or Democrat -- who is seriously interested in making progress on this issue for women and moving past electioneering and scoring political points should step up and support the proposal," Fischer said in a statement. "For the first time in over half a century, we have the opportunity to update the Equal Pay Act with a bill that actually provides needed changes and can realistically pass."

Fischer isn't exactly right about the measure being the first opportunity "in over half a century." Democrats have already introduced the Paycheck Fairness Act three times, and the GOP blocked it every time.  It's more like the first time that Republicans have opted against being totally obstructionist on a measure about equal pay.

The move from Republicans, no matter how lukewarm, puts Democrats in the potentially awkward position of having to vote against a bill nominally about addressing pay disparities. This was by design, of course. As we saw with the GOP "rebellion" over the lack of rape exceptions in the 20 week ban proposed in January, Republican women have grown savvier about optics than in years past.

Democrats, predictably, are not having it. "I think it would be great news if Republicans were finally willing to listen to working families and join Democrats to make sure women get pay equity," said Washington Sen. Patty Murray. "But Republicans will need to put real solutions on the table -- and so far, they are unfortunately falling short."

Sen. Barbara Mikulski of Maryland also announced that she would oppose Fischer’s bill. ‎"Middle-class families need a raise and more money in the family checkbook," she said. "Five years ago we made a down payment toward equal pay passing the Lilly Ledbetter Fair Pay Act to keep the courthouse doors open. I'm fighting to finish the job and stop wage discrimination from happening in the first place."

Some Republicans may have inched closer to acknowledging people's feelings about pay disparities, but they have remained silent on the kinds of policies -- lack of paid family leave, universal preschool, affordable childcare -- that force so many women to choose between career and family and contribute to such the disparities in the first place. But for Democrats who believe that no equal pay measure is preferable to an equal pay measure stripped of strengthened enforcement mechanisms, taking a hit on optics may be worth it in the long run.

The question now is whether the Republican move to turn the tables against Democrats will actually work. It may be the legislative equivalent of “stop hitting yourself, stop hitting yourself,” but it could be enough to dull, however superficially, the appearance that the GOP is a foe of women's equality.