The former secretary of state is positioning herself as a populist, but is she willing to listen to progressives? 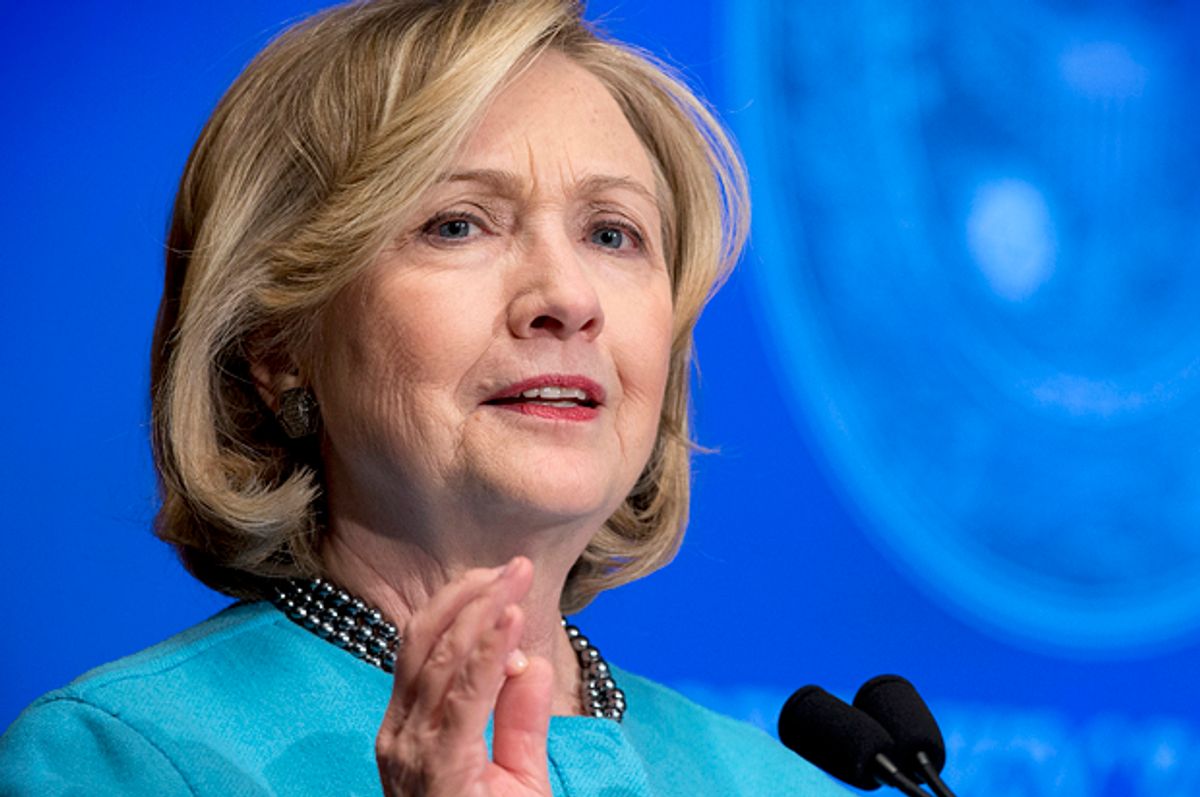 Will Americans be able to look past preconceived notions about Hillary Clinton and see her in a new light as the 2016 campaign unfolds?

Let’s be honest, lots of Americans—and not just progressives—have sighed as she has gathered support from her party’s establishment. Now that Clinton’s officially in the race and her campaign is casting a wide net for donations, volunteers and endorsements—which any competitor would also need—she seems even more inevitable.

So let’s look at a half-dozen unknowns or unanswered questions, about Clinton's vision, her loyalty and values, her evolution, her campaign, and the real stakes in 2016 that should shape people’s opinions and enthusiasms in the months to come.

1. Her real reasons for running. Did you see the announcement video? It opens with a young mother who’s moving so her kid can attend a better school. It continues in Spanish with two Latino brothers starting their own business. Then a stay-at-home white mom looks nervous as she says she’s going back to work. A young African-American couple looks forward to their first child. A young Asian woman is looking for her first job after college. Two men are looking forward to getting married. Then a middle-age woman contemplates retirement and a middle-aged man looks at a new career.

Ninety seconds in, Clinton appears and says she’s getting ready to do something too—run for president. “Americans have fought their way back from tough economic times, but the deck is still stacked in favor of those at the top. Everyday Americans need a champion and I want to be that champion.”

Is that enough? Is it a big enough theme to build a winning coalition? In 2008, Barack Obama bemoaned the “smallness of our politics.” John Edwards said we had become two Americas. “The declaration rang hollow,” the New York Times wrote Monday, “and uninspiring to some Democrats.”

Perhaps, but you don’t see images of the slices of society Clinton would help in videos from her GOP competition. Stage-managed as it was, her video pointed to people who’ve played by the rules and could be helped by a more activist government. That’s unlike any announcement on the GOP side, which typically derides government as the problem. We’ve haven’t heard a bigger answer to “why Hillary” so far. But there's time.

2. How different will Hillary be from 2008? We also haven't heard what she would do and how she would do it. On the other hand, it’s easy to contrast where Democrats and Republicans stand, based on party ideology, candidates and leadership in Congress. Democrats would seek to steer government to offer more of a helping hand, hopefully a more tangible one than in recent years. The GOP would keep being the Party of No, as many candidates have said in forums like the Iowa Freedom Summit.

In 2008, Clinton knew the issues better than Barack Obama. She articulated more specific government responses and fought hard to win the nomination—so hard, it turned out, that she alienated Democrats, who after eight years of George W. Bush’s cowboy rule, wanted someone who would be more of a mediator in chief. Since then, she succeeded as Secretary of State, as measured by the lack of major flareups, and then at her family foundation, where she raised millions, especially to help women and girls.

Whether Clinton will turn off voters, especially as she starts to fight back against the slurs that have already come from the GOP, is an open question. Everybody knows it is a virtue when male politicians are seen as fighting for a cause, whereas a strong woman politician is often judged harshly for the same behavior. How much she’s learned since 2008, and how she can handle the heat (manufactured by GOP propagandists or real) will be telling. Here too, the public has yet to see who she really is.

3. Can she overcome Clinton fatigue? Presidential elections are supposed to be about the future, not the past. But you can be sure the GOP and many in mainstream media (such as the Times' Maureen Dowd) will keep reminding people about the provocative periods of Bill Clinton’s presidency. There’s Monica, Whitewater, failed healthcare reform, impeachment, and newer nonsense over Benghazi, Libya, and her State Department emails. All will be fodder for GOP mudslingers to spark a visceral aversion to her.

There’s also a version of this dynamic on the political left. It’s best summarized by saying she is too close to Wall Street, which implies that she will espouse policies that will not make the 1 percent unhappy. The question is will she be able to stand apart and above these smears and stereotypes. The answer depends on what she says and how she says it. Her video suggests she knows she has to do this. Its opening lines were a direct reference to Elizabeth Warren’s talk of an economic system that’s “rigged” (Clinton said “stacked”) against “everyday Americans.”

The talk of Clinton fatigue will sound small and trite if she speaks in a way that’s grand, moral and resonates. Yet again, it remains to be seen how that will unfold.

4. Can she be more than a predictable partisan? Anyone who saw her announcement can easily connect nasty GOP policies that have hurt or hindered every demographic group in the video. The GOP opposes expanded public education, immigration reform, same-sex marriage and lowering student loan interest rates, and won’t raise the minimum wage, support pay equity for women or expand retirement security programs, and so on. In the Times on Monday, economist and op-ed columnist Paul Krugman wrote that the Democrats and Republicans are so polarized it hardly matters who the candidates are. “Voters will be getting a real choice. May the best party win.”

Actually, that’s not going to be good enough. It remains to be seen if Clinton will somehow do what neither Democrats nor Republicans have done well recently, which is show how she can get results that help people and don’t widen partisan divides. The biggest test of this will be on inequality issues, such as wage stagnation, pay equity, college loan interest rates and the retirement security crisis—all of which have majority support among the public, not just progressives. Clinton might turn heads if she, for example, tells McDonald’s why its recently announced $1 an hour raise isn’t good enough for workers who need $15 a hour. Or if she convinced her Wall Street friends at banks to cut college loan rates, or other industry leaders to agree it's fair to pay higher taxes for Social Security.

There is an opportunity to show how to solve problems unlike both major parties recently, because their leadership hasn't wanted to do so or hasn't had the relationships to pull off. Here, again, Clinton could be a force for positive change in ways not in evidence lately.

5. Is her campaign listening to progressives? This is important because progressive solutions have the overwhelming support of a majority of Americans, such as expanding Social Security based on slightly increasing income taxes for the wealthiest Americans. In contrast, narrow interests that profit from the status quo often sponsor GOP candidates and “centrist” Democrats.

There have been some signs she is more liberal on social and economic issues than Bill Clinton. It’s been reported that she has met with Heather Boushey, executive director and chief economist for the Washington Center for Equitable Growth, and Teresa Ghilarducci, a labor economist known for retirement security issues and challenges facing workers 55 and over. TheProgressive Change Campaign Committee, which seeks to elect candidates at every level of government, met with Clinton’s staff last week, urging them to support its “Ready for Boldness” agenda from expanding Social Security benefits to debt-free college. Even Bill Clinton was seen carrying the latest book by Peter Barnes, founder of Working Assets/CREDO, which makes a very strong case that a portion of corporate profits should be returned to taxpayers as an annual dividend—like oil and gas companies do in Alaska to that state’s residents—because those profits are subsized by extensive government investments.

Here, too, it remains to be seen what Clinton will say beyond what’s widely expected from her, such as supporting policies helping women and girls. It would be telling, for example, if she expressed real reservations about the newest international trade deal that’s coming before Congress, the Trans Pacific Partnership. After all, her opening message said that she wanted to be a champion for everyday Americans—who are often hurt from such deals.

On the other hand, progressives should consider worst-case scenarios, namely, what would likely happen if Republicans controlled the White House and Congress in 2017? There would likely be U.S. Supreme Court appointments of more right-wing justices. And just like Kansas Republican Gov. Sam Brownback and his state’s GOP-majority legislature are passing laws that punish poor people who use social welfare programs, one can only imagine what Republicans would do to undermine anti-poverty safety nets.

6. Will she connect and inspire anew? This is really the biggest unknown, as political campaigns have to invoke a moral message or strike poetic notes that move the public and convey new possibilities. This is where new mandates for governing come from. Campaigns that don’t strike that tone are far more vulnerable to mudslinging and fear-based messaging.

Can Clinton be a champion for the people and communities she highlighted in her video? Can she convince enough of corporate America that they will benefit when they don’t hoard every last dollar, but share wealth created by their workers? Can she hold the line, or maintain her composure when facing the nasty stuff the GOP will throw at her without being offputting as in 2008?

It remains to be seen. The 2016 election is more than 18 months away, more than enough time to get to know her. There are already long lists of questions awaiting Clinton on many issues, from her stances on jobs, to war and peace, to climate change and more. Critics already are questioning her “soft populism.”

However, it’s smart politics not to launch a presidential campaign like Ted Cruz or Rand Paul, giving lengthy speeches with long lists of ideological goals. That strategy means that Americans will be looking very closely and carefully at what she says in coming weeks. One can only hope that Hillary Clinton gives the public enough reasons to put their preconceptions aside. That’s worth watching and waiting for.