"We have strength in numbers": How the Fight for $15 will transform the 2016 debate

The movement for a livable wage has moved the center on the issue. Candidates will have to adjust accordingly 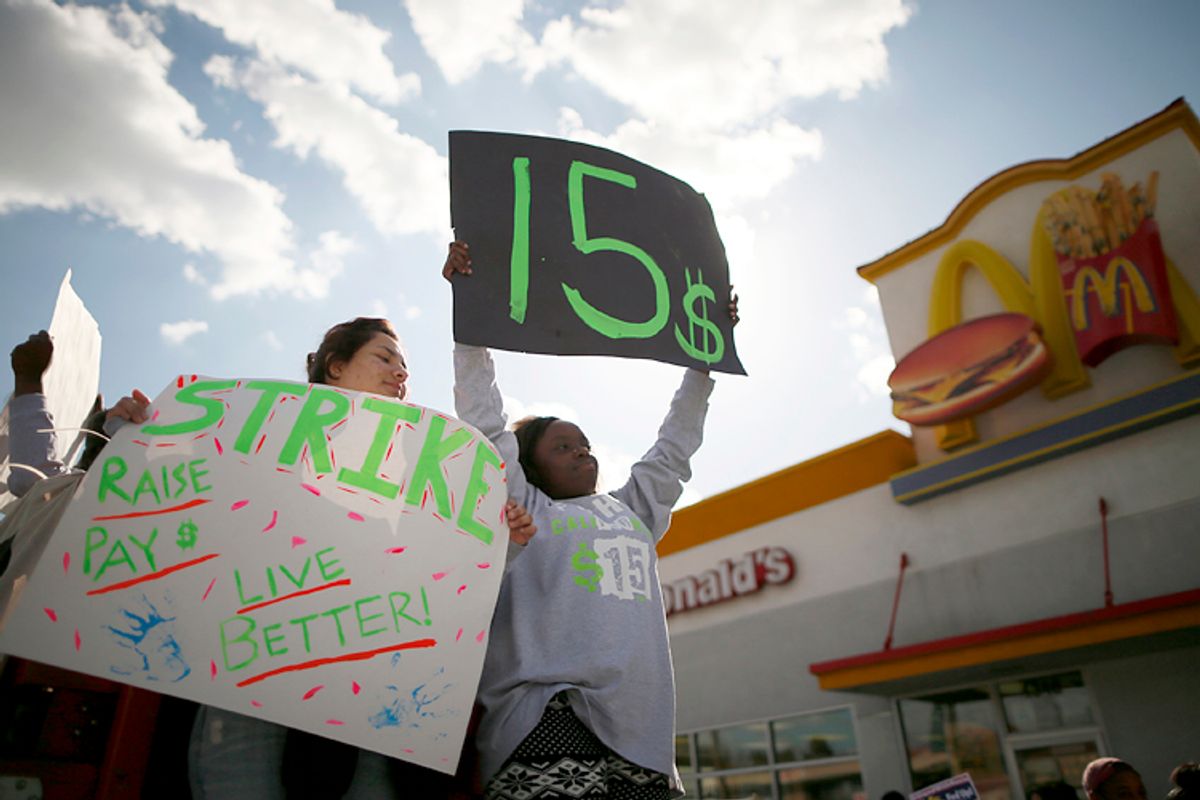 In just over two years, the Fight for $15 movement has stacked up major victories against giants like McDonald’s, Wal-Mart and Target, pushing each to raise wages and calling their respective corporate bluffs about job losses and ballooning prices. The movement has also shifted public consciousness, making visible the production of poverty and its consequences. And while Congress continues to punt on the issue, four states passed ballot initiatives in 2014 to raise the minimum wage and cities across the country have committed to or already done the same.

This is the thing about movements: They work.

Next on the list of those to feel the force of that movement: 2016 contenders. This is particularly the case for Democrats, who, thanks to a resurgence in labor and alternative labor organizing and a growing national consensus on fair wages, have been pushed to find a new center. Hillary Clinton, the lone Democrat to officially announce, will perhaps feel this pressure most acutely, as Noam Scheiber wrote Wednesday at the New York Times.

The issue will be in the foreground on Wednesday, when fast-food and other low-wage workers plan a nationwide walkout that is expected to draw tens of thousands of people to rally support for a $15-an-hour minimum wage. [...] The daylong strike may provide the first test for the campaign at managing the desire of voters and party activists for an aggressive approach to mitigating income inequality. Mrs. Clinton said that she was running for president because “the deck is still stacked in favor of those at the top,” but she has offered few details about how to bridge that gap.

And because the Fight for $15 has always been more expansive than a demand for a livable wage, Clinton, along with Republican contenders and candidates of both parties still poised to declare, can and should be pressured to stake a position on unpredictable scheduling, the lack of paid medical and family leave and the historical exclusion of domestic workers from basic labor protections.

While the current focus may be on Clinton and the Democratic primary, Republicans are not immune to the pressure. Marco Rubio, who launched his campaign this week, said in January that he is "not for" repealing the minimum wage. "But I can tell you, I don’t want people to make $10.10 an hour," he continued. "I want them to make $30 an hour.”

A nice sentiment, if not for the caveat that followed. “And my problem with raising the minimum wage is not that I wanna deny someone $10.10," he explained. "I'm worried about the people whose wage is gonna go down to zero because you've now made them more expensive than a machine.” (As the Time notes, the economic research department of the notoriously leftist Goldman Sachs last week released an analysis of minimum wage increases that made no reference to possible job losses.)

Also at issue, in terms of policy and campaign presentation, is the particular burden of poverty women face across the country. Two-thirds of minimum wage workers are women, 65 percent of fast food workers are women and domestic workers are overwhelmingly women, mostly women of color and immigrant women.

Women are also significantly overrepresented in the kind of low-wage jobs that deny workers paid sick leave, reliable scheduling and paid family leave. Any campaign talk about women’s lives and advancement must account for these realities. It may have been politically possible in years past to avoid these issues, but, increasingly, that is no longer the case.

While the Fight for $15 moves the center on living wages and aligns with a coalition of other justice movements -- including Black Lives Matter and climate action -- to articulate a progressive vision of justice, candidates will have to calibrate their own positions. In the current context, generalities about a "stacked deck" are no longer sufficient. Consensus about the immediacy of action is growing, and that consensus will shape the 2016 debate.

"This isn’t just our fight, it’s for every hard-working person who is living on the brink,” Corrine Hall, a North Carolina-based child care worker, said in a statement from the Fight For $15. "We have strength in numbers.”