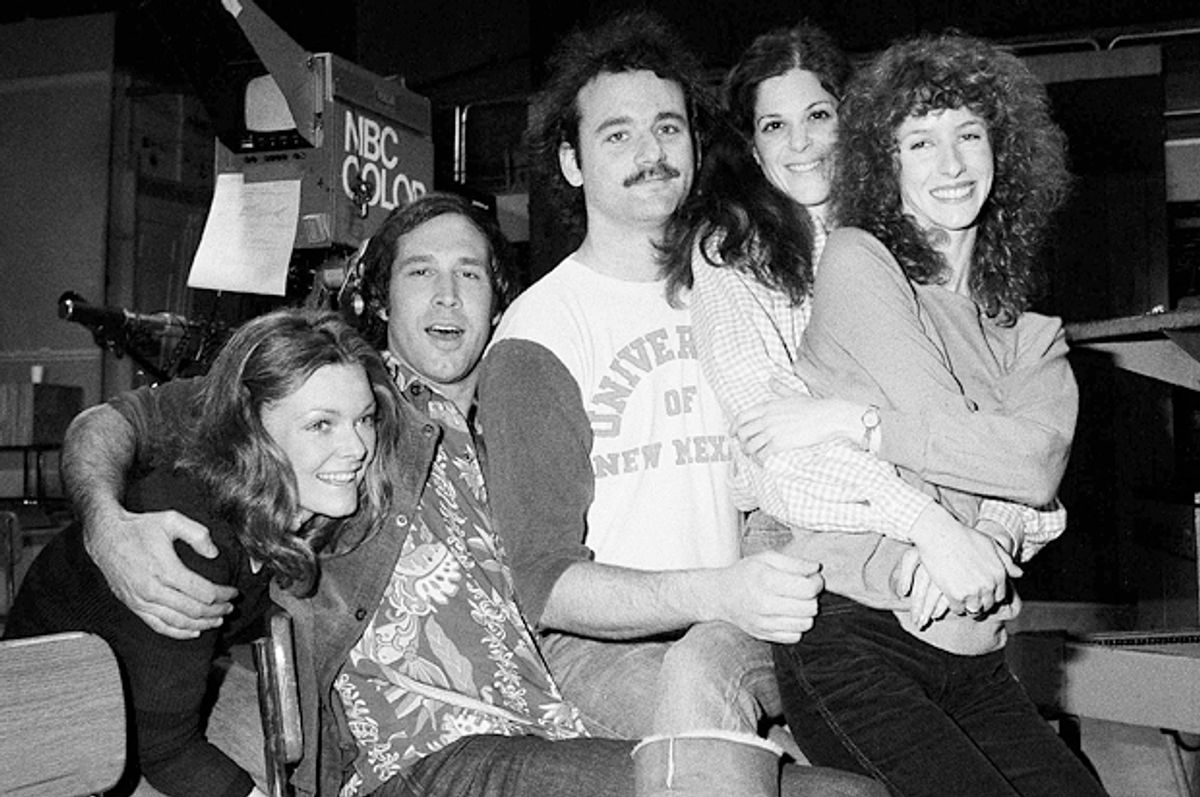 According to reviews, the film is chock-full of interviews with former cast members and hosts, as well as featuring plenty of old sketches. But it also doesn't shy away from more serious material, chronicling the show’s rise to prominence in the '70s and years of struggle in the '80s, its involvement in shaping the U.S. political landscape through satire, including key flashpoints like the 2000 Gore-Bush presidential election, the hardship of 9/11, its fight to remain relevant in the era of viral videos, and its struggles with sexism  and racism over the years.

Regarding the show's long issues with diversity, the film features original cast member Garrett Morris’ revelation that he felt "robbed" during his time on the show, while Leslie Jones recounts the recent Twitter backlash surrounding her controversial Weekend Update slavery piece. As Kevin Fallon writes over at the Daily Beast, "the documentary also fully owns up to SNL’s sluggish embrace of diversity, a lethargic progress that’s been borderline inexcusable on such a purportedly progressive show. A montage of Murphy at his best is contrasted against the embarrassing controversy in recent years that led to a cold opening featuring Kerry Washington and an apology for not having any female members of color in the cast."

It also delves at length into the show’s history of sexism, with prominent female cast members like Laraine Newman, Tina Fey, Amy Poehler and Julia Louis-Dreyfus speaking out about the show's notorious boys' club mentality. “When I was there, it was definitely a sexist environment," said Louis-Dreyfus. “There were very few roles written for women.”

Yet things seem to have improved over the years. “It’s strangely more equal than you would think,” added Amy Poehler. “Perhaps there was a time when there was less light to get your stuff through, and that I understand. But the doors were wide open when I arrived there and we really took advantage of it.”

The reviews rolling in for the film are mostly positive. Rolling Stone heralds it as "an affectionate and wide-ranging documentary about the importance of SNL as both a cultural and a Gotham institution,"  while Flavorwire calls it "a stylish and entertaining examination of why it’s still on the air, 40 years on — and why we’re still talking about it."

But at the same time, there seems to be agreement that while the film is pleasant, it might not be all that necessary, especially given the major publicity and prime-time festivities surrounding the show's 40th anniversary just a short while ago. "Anyone familiar enough with the series to make these complaints can appreciate the challenge of crafting a feature-length doc that does justice to the comedy empire Lorne Michaels and scores of brilliant comedians have built," writes THR. " Anyone familiar enough with the show to make that concession might not need to see Live From New York!”