New "Star Wars" trailer, new hope: Leia finally picks up a lightsaber -- and the little girl inside me cheers

For women who grew up with these movies, Leia's story always felt a bit slighted -- until now 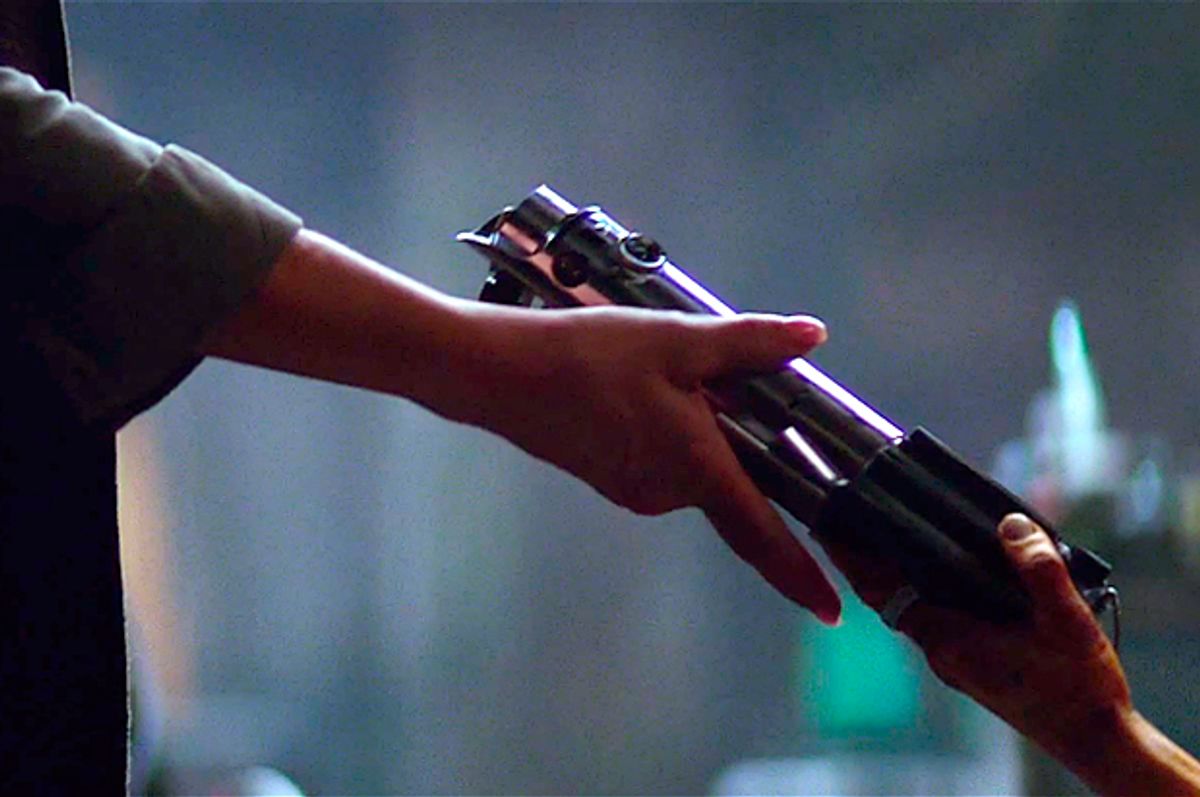 Like any right-thinking “Star Wars” fan I have met this new production, from Disney and J.J. Abrams, with a healthy mix of enthusiasm and terror. This franchise has a history of breaking fans’ hearts.

The trailer released today is so promising that it’s rendered me unable to think about anything else. I’ve reverted to adolescence—the age when I first saw the films—and running over, in my head, the snippets of story we’ve seen. “Star Wars” has always been the genre franchise to beat, and with this revival, we might see a film series come together that is so sublime that it makes comic-book heroes look ill-thought-out by comparison. “Star Wars” has the epic scale of galactic combat, yes—but it also has the romance of wide open spaces, the poignancy of isolation in huge, mostly empty universe, and the fragile spirituality of distant space.

When I watched “Star Wars,” I was just a girl, and even though I loved it, I always felt the need to prove something. The films weren’t totally for me—Leia (Carrie Fisher) is the only female character of substance in the original trilogy, and she’s both a plot device and an object of romance. Despite being given the murky prophecy of “there is another,” she’s not the hero of the story. Sometimes a story only needs one hero, and Leia gets her limelight in other ways. But I have always felt, keenly, that Leia was shortchanged by that original trilogy. Her story of torture at the hands of the man who turns out to be her biological father is conveniently backgrounded; her trauma at seeing her planet blow up, at the hands of her father, is similarly ignored. Leia has a story that is never told—a princess who turns out to be adopted, who chooses to make her life about resistance instead of acquiescence. When Luke first meets Leia, she is making flirtatious wisecracks in a prison cell, following her life’s total devastation, to a man wearing a Stormtrooper’s uniform. There is so much written there that is never given voice, a story of a woman who is at the very end of her rope.

The films either didn’t know what to do with her or didn’t care to discover it; the second film, “The Empire Strikes Back,” comes the closest to telling Leia’s story well, and it’s accomplished by isolating her from the guys and freezing her love interest in carbonite. (That movie is also the only film in the entire “Star Wars” franchise that had at least one writer that was a woman: Leigh Brackett.) And though the expanded universe went on to write in the gaps of Leia’s story—and introduce dozens of new female characters—it wasn’t the same as having her story writ large on the silver screen. The prequel trilogy, when it showed up, had its heart in some of the right places when it introduced Natalie Portman’s Queen Amidala—but it botched the execution enough that it didn’t feel right.

“Star Wars: The Force Awakens,” which opens this Christmas, has promised a cast stuffed full of women—including Lupita Nyong’o and Gwendoline Christie, who are both nothing to sneeze at. But when I saw that trailer, what made my heart turn somersaults was the moment with the narrator—Luke Skywalker (Mark Hamill)—describes how the Force is strong in not just him, and his father, but his sister, too. And the trailer shows us an older, more mature pair of hands, grasping a civilized weapon for a more civilized age: a lightsaber, the symbol of both “Star Wars” in this universe and a bygone order in that universe. She’s finally getting to hold her own legacy, her own power—the totem, such as it is, of this franchise. Leia Organa never wielded a lightsaber in the trilogy; she barely used the Force; she only tangentially came to terms with Darth Vader as her father. Carrie Fisher made her memorable, but she was denied personhood, and so, too, were we, the female fans.

Is it crazy that when I saw that moment in the trailer, I felt an enormous upswell of triumph? Not just for Leia, former princess, but for me—and for the little girl I was, when I first saw these films. I don’t have to prove anything anymore. These films are for me, too. And that is how it should be. Because “Star Wars” is, as Joseph Campbell so famously framed it, the hero’s journey, the story of everyone, for everyone. I’m glad that the new generation of little girls will know that they can be heroes too.