Sarah Palin's incoherent Facebook brag: "I was in our bus wrapped in the Constitution!" 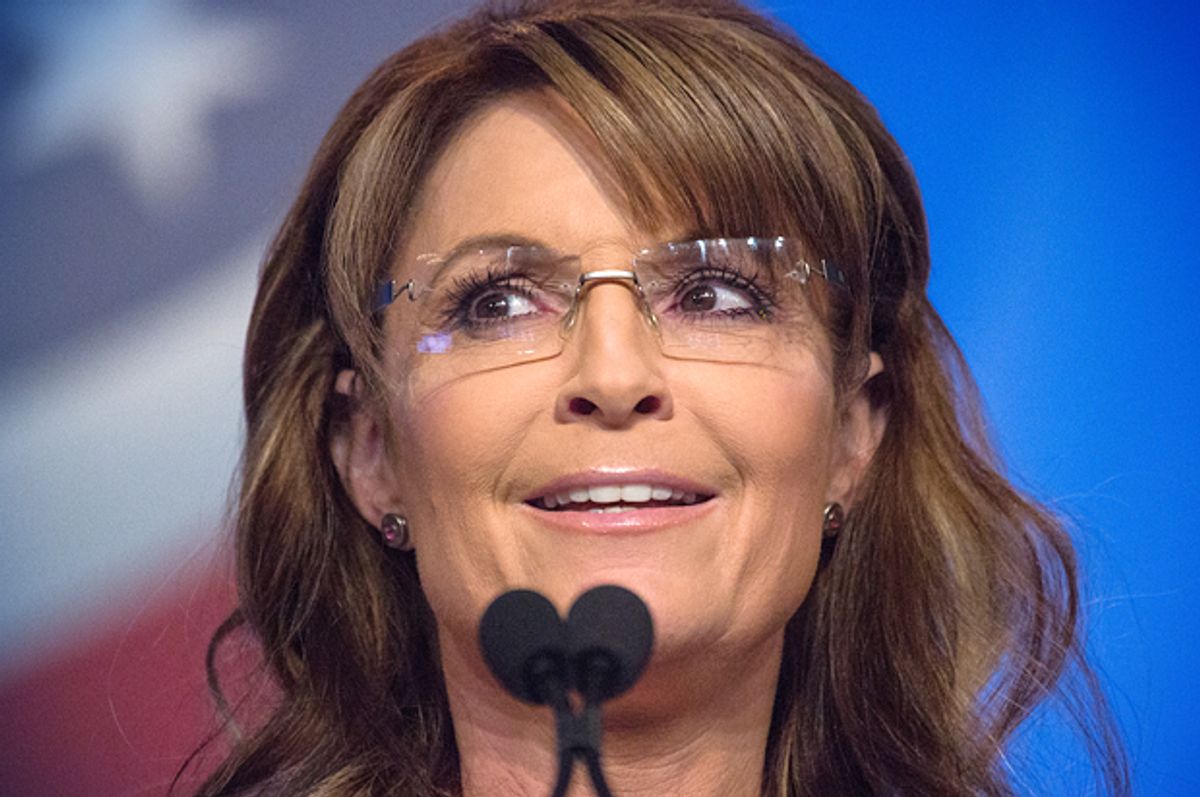 On Monday, Clinton and her aides went out of their way to avoid giving the media gathered at a campaign event in Iowa any opportunity to question her. The image of reporters furiously running after Clinton's unmarked vehicle quickly became the topic of intense Internet joking.

In the Facebook post, Palin claims to be speaking for "people all over the country [who] are reminding each other this Hillary Scooby-Doo Tour thing sure looks familiar" -- as if she and Hillary Clinton are the only two candidates who have ever dictated the terms of their interaction with the media. Palin correctly notes that, while on her "Our Nation" tour in 2011, her team also refused to release her destination to the media ahead of time.

But as the video she posted visibly attests, it is not as if it was that difficult for the media to follow her. Unlike Clinton's "Scooby Van," which is a nondescript, drably colored vehicle with blacked-out windows, Palin traveled around the country in a red-white-and-blue chartered bus with a giant copy of the Constitution and the "Our Nation" logo plastered on the side.

As Palin explained, her tour was "proof that we dare not go backwards and fundamentally transform America; instead we must move ahead to fundamentally restore all that is good and safe and strong in America." Um, okay?

You can read the full text of Palin's message, and watch the video she posted to Facebook below via Sarah Palin's Facebook page:

"Hmmm, as people all over the country are reminding each other, this Hillary Scooby-Doo Tour thing sure looks familiar. We're flattered the liberals think the idea is really keen! Since it's ‪#‎ThrowbackThursday‬, it's also pretty keen to thank the democrats for taking a page out of our playbook and also to share the picturesque, sincere, no-media "One Nation" RV trek of ours a few years ago. From way up North in the natural resource-rich state of Alaska down to the inspirational, loud and patriotic Rolling Thunder Rally in DC to a calm clambake on a cool New Hampshire night, it was a blast to introduce American people and places to folks who crave the reminders of what makes our nation exceptional and free! Our tour is proof we dare not go backwards and fundamentally transform America; instead we must move ahead to fundamentally restore all that is good and safe and strong in America. And we're pretty good about doing it without letting the media get in the way. (In fact, it was great to see the media finally have to do what the rest of the middle class does every single day – WORK FOR IT. Though I don't know why they were frustrated not being able to keep up with us, I mean, I was in our bus wrapped in the Constitution!)
So here's a little secret – a video from the SarahPAC vault that's never been released until now. (I knew it'd come in handy someday.) Makes me want to fire up the RV again, load up the kids... Enjoy!
- Sarah Palin"

Hmmm, as people all over the country are reminding each other, this Hillary Scooby-Doo Tour thing sure looks familiar....