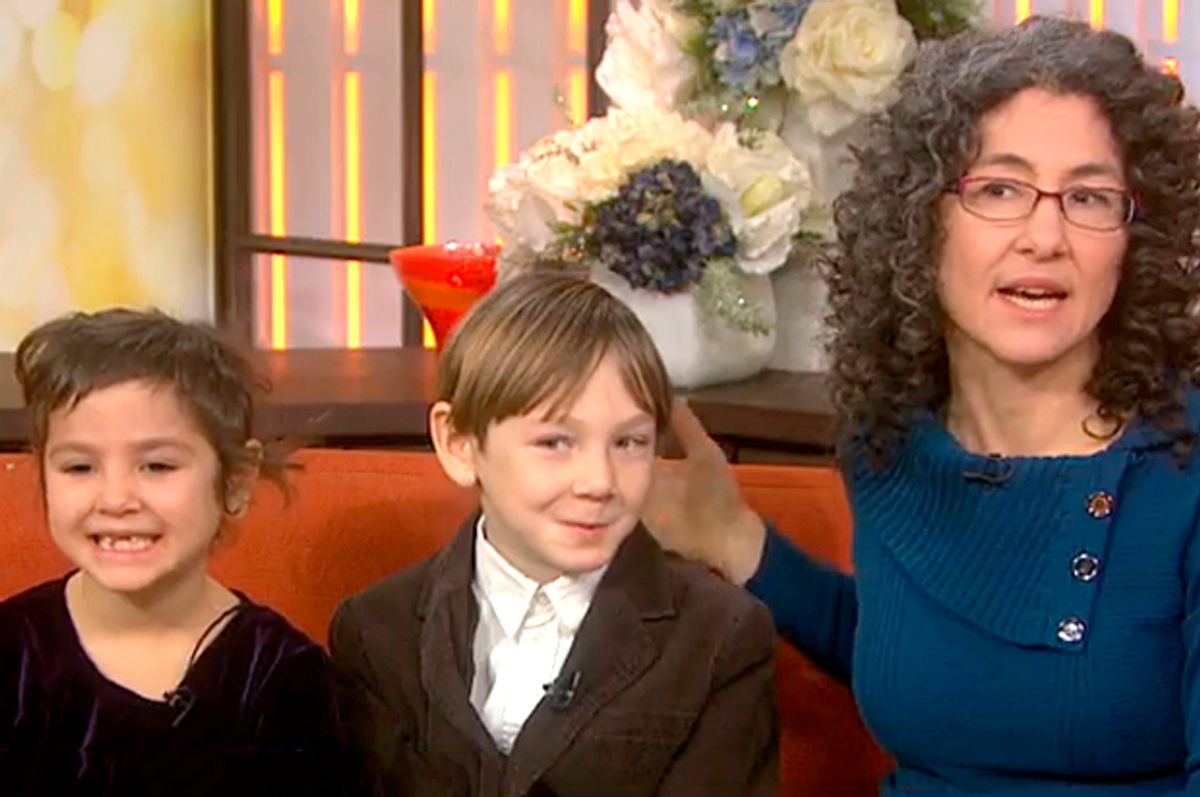 Psst! I just heard the Meitivs are "off." Like bad milk. Like bad parents. They're actually dangerous -- or so says the friend of a friend of a neighbor, and really: What more evidence do you need?

You know who the Meitivs are, of course. They're the Maryland parents hounded by the cops and Child Protective Services for letting their kids do the unthinkable: Play in the park and walk themselves home. Twice. The nerve!

What you may not know is that one of their own county councilmen posted a slur about them on his public Facebook page. Wrote Montgomery County's Councilman at Large, Hans Riemer:

"Comment from a friend. 'I just want to tell you that we have close friends in that neighborhood, and they and other neighbors there have been worrying FOR YEARS about the way this family let those kids wander around the urban environment alone (starting when the kids were much younger than they are now). I don’t know if you know the family , but the neighborhood believes something is really “off” about this family and these kids may be in danger. Just because the press has made them out to be heroes doesn’t mean the kids are safe. My two cents.'”

Cents? More like two bricks thrown through a window.

The councilman has since taken this post down. (One commenter quipped that maybe his mother made him do it because the Meitivs are raising their kids exactly the way she raised him.) But the snippy smugness of the item -- and the desire to share it -- illustrate exactly why we can't have the government intervening in parenting choices: Everyone thinks everyone else is doing it wrong.

Breathes there a human who doesn't think her sister/cousin/friend is feeding her kids the worst possible foods? Giving them the craziest bedtime? Nuts when it comes to potty training/ tantrum taming/birthday party themes? And why did she let him get that haircut?

Become a parent and there's a target on your back.

And yet, most kids, even the ones with the lamest birthday parties, turn out just fine, so long as they are loved, fedand not abused. Ada Calhoun, founding editor of the ur-mommy blog Babble, was prompted to write a whole book after she realized that all her essayists -- the attachment parents and the time-outers, the co-sleepers and the Ferberizers -- were all raising fine kids. They just didn't realize everyone else was raising fine kids, too.

That's why all that CPS should ever be on the lookout for is obvious, indisputable and immediate harm -- not just a parent who has made some choices that this or that cop might not make for his own kids.

"Neighbors have been worrying FOR YEARS about the way this family let their kids wander around..." the gossip hissed. So what? Fantasizing about awful outcomes does not make an activity into a crime. No matter how many years the neighbors fretted, the kids are absolutely fine. I met them. They're cute and sweet and the 10-year-old is already as feisty and articulate as his mom.

"What if the girl was dragged off by a predator and her brother wasn't strong enough to save her?" (That was a real comment I read.) That has no more weight than me worrying, "What if the parents drove the kids home and their steering wheel broke off?" There is always a hypothetical danger in any situation, which is why, unless we want to criminalize all parents, the authorities should  have to witness an actual, looming danger -- a cheetah in the crib -- before arresting any parents.

If the neighbors don't want to let their own kids "wander" (what we used to call "having a childhood") -- fine. But let's not forget that different eras, different cultures, and different people all think different things make sense.

And that's actually the big picture that worries me -- the idea that we can criminalize anything outside the social norm of the nanosecond. A while back, the U.S. government put out pamphlets urging parents not to hug their kids too often or kiss them on the lips. Somewhere along the line, moms were urged to keep babies on a tight schedule. And then no schedule. Have your babies sleep on their tummies. No! Their backs! Right now, whole countries guffaw at the idea of adults getting down on the floor and playing with their children. To them it's like eating dinner with your dog.

So rather than arresting everyone on the planet, let's humbly admit there is no one "right" way to raise a kid.

There is, however, a way to be a decent neighbor. The one near the Meitivs seems a little off.