“We don't have a political agenda, we just want to make fun of everyone”: Inside “Clinton the Musical” 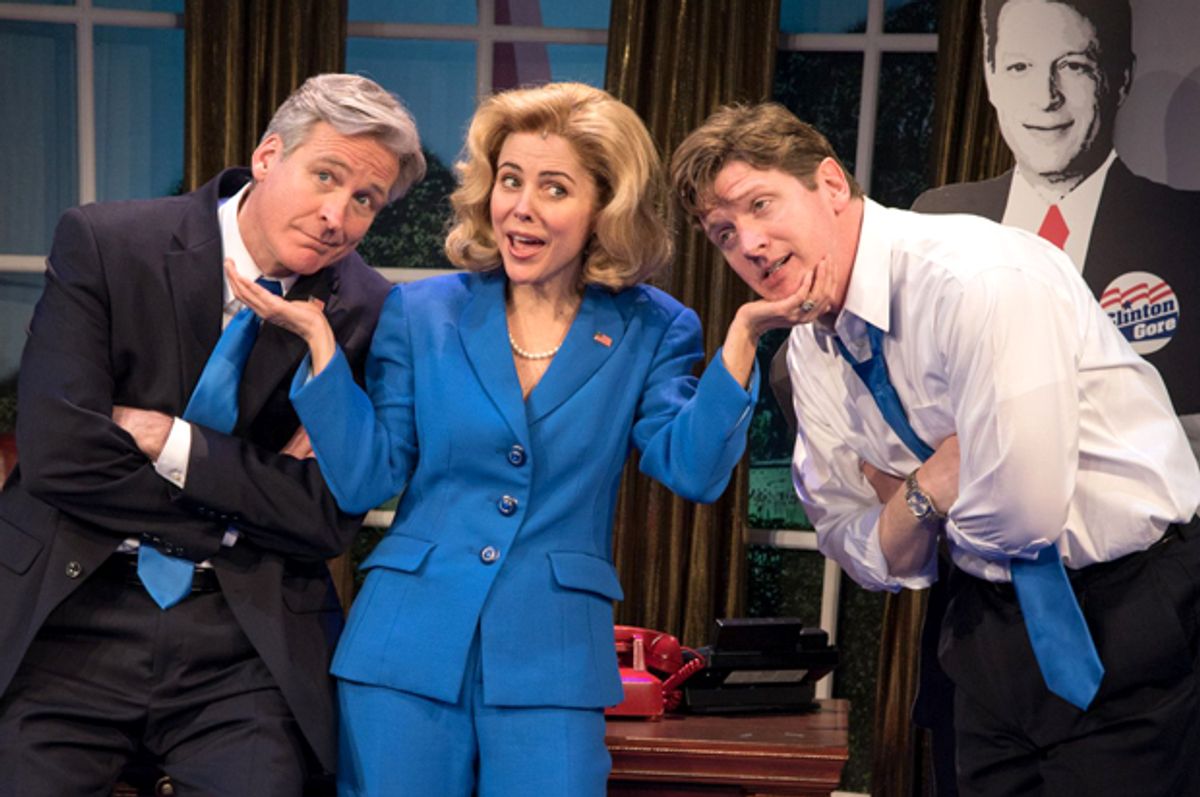 Oh, how long this first week of Clinton campaign coverage has been. It hasn’t even been a full seven days since Hillary’s announcement, and yet it feels as if a million years have passed since she popped up near the end of a YouTube video to reveal the big surprise that she’s running for president. It was a different time, long before the Chipotle burrito bowls and the van chasing and the tweets (so, so many tweets).

And so I can hardly believe it was just two weeks ago that I sat in a darkened theater a few blocks northwest of Times Square, waiting to see what was, at that point, the predominant version of Clinton-inspired absurdity: the new off-Broadway show “Clinton the Musical,” which opened at New York’s New World Stages just a few days before Hillary’s announcement.

It’s a close competition, to be sure, but "Clinton the Musical" might actually be sillier than media coverage of Hillary’s campaign so far, what with the play's over-the-top portrayal of Bill Clinton’s years in the White House and its even more outrageous cast of characters. Monica Lewinsky (Veronica J. Kuehn) plays a starring role, of course, and Newt Gingrich (John Treacy Egan) and Kenneth Starr (Kevin Zak) make for a pair of flamboyant and genuinely funny villains. But the show centers, naturally, on the Clintons, Hillary and Bill -- both of him.

Played by two different actors (Tom Galantich as “WJ Clinton” and Duke Lafoon as “Billy”), President Clinton is portrayed as having two corresponding, distinct sides: The well-meaning, liberal civil servant and the McDonald’s-guzzling, philandering (but somehow instinctually skillful) politician. And then there’s Hillary (Kerry Butler), the only person who can see both Bills at the same time, as halves of the same man -- and who is laughably eager to just be the damn president herself.

So, basically, it is not the world’s most inaccurate satire.

Salon caught up with the show’s playwright, Paul Hodge, by phone last week, to discuss his inspiration for the play, why Republicans seem to be the butt of more jokes, and who tends to laugh harder -- liberal audiences, or conservative ones. He also explained why he's drawn to political characters, yet doesn't really have an opinion on Hillary's campaign: "My personal view is that I think she should be running," Hodge said, "but that's of no consequence, seeing as I'm Australian." Our conversation has been condensed and lightly edited for clarity.

Could you give me a little bit of background on the show and what it's about?

Originally, the idea came back in 2006 or 2007, when my family went to go and see a musical in Australia about a former Australian prime minister, and at the end of it, my dad said, “Well, it was good, but I don't know whether politicians make the best subject matter for a musical -- except, maybe, Bill Clinton.” And I went, “Of course!”

Michael, my brother, who wrote it with me, he was obviously there as well. When we decided that we would write this show, Michael said, “For some reason, I think there should be two Bill Clintons played by two different actors,” and I was like, “Why the hell would we do that?” And then when I read Clinton's autobiography, he talks about how he felt like he'd led these two parallel lives, and all these other people who knew him, in their biographies about him talked about these two sides to him and these kind of contradictions. Even Dick Morris, who was his political consultant in 1996, he had little names for the two different sides, like Saturday Night Bill and Sunday Morning President, or the Politician and the Boy Scout. It seems like a fun way to tell a story we all know, but in a way we don't know.

How long have you been working on the play?

The original idea came around 2006 and we were kind of toying with it in 2009 and 2010, but it wasn't really until the end of 2011 and 2012 that it really got going. We did a version at the Edinburgh Fringe Festival in 2012, and from the success of that, we were offered to workshop the show in London at the King's Head Theater in 2013, which we did. I'll be completely honest: When we did the original version in Edinburgh, we weren't sure how Americans would react to it. But they actually loved it the most and we had all these people telling us, “Oh, you should bring it to New York,” and the same thing happened in London. We submitted it to the New York Musical Theater Festival and got in there and had a lot of fun just last year, and so here we are, off Broadway!

How have audiences been responding?

I think they've been enjoying it; they've been having fun. It's very funny to watch the audiences sit there in this preview period. The show has changed significantly since last year, but I think the audience is reacting in a different way, slightly, than last year, because it's getting closer to an election and it's becoming slightly more partisan -- the politics are becoming a little more partisan. Because we're neither Democrats nor Republicans, because we're Australians, we just come into this looking at people as human beings. We don't have a political agenda, we kind of just want to make fun of everyone!

That's interesting to see, that people come in and I can kind of tell when we have a more Republican-leaning audience or a more Democratic-leaning audience by the jokes that they laugh at. So yeah, it's a lot of fun to see that.

Yeah, personally I found the whole show delightfully bizarre. It's just so absurd!

Totally, totally. I was a little bit perplexed about your political motivations. It felt to me that the show was coming from a place of admiration for the Clintons. The Kenneth Starr and Newt Gingrich characters, for instance, are even sillier characters than either of the Bills or Hillary. Is it infused with your own political views or did you just view everyone as an equal opportunity target?

I think Newt and Kenneth, I would agree, I think they are probably sillier in their portrayal than the Clintons, but I think maybe that's just a product of, in any show, you need to have a protagonist and a hero -- and in this scenario that's the Clintons. But we also make fun of the Republicans, Kenneth and Newt. I don't come from a place of wanting to criticize any of those people; I think they're all larger-than-life characters even in real life, and that's what makes them perfect for comedy and satire.

I've kind of fallen in love with all these characters and people. For me, the show is about the humanity of everyone, and about the fact that everyone has bits of ourselves that we are ashamed of or we don't like, but we should be able to show those parts and show our humanity. I think today, sometimes in politics, when there's the 24-hour news cycle and any stray comment a politician makes can suddenly be whipped up into something, that politicians become very afraid of letting people see them as they truly are and try to stick to talking points. I think that's not as much the case with Bill Clinton because I think even if he tried, he couldn't hide the fact that he's a very recognizable human being, and his humanity kind of shines through. That's what I wanted to do with each of these characters, to look at them as human beings -- and human beings are funny!

You say the show started with this idea of portraying the two sides of Bill Clinton, but the show is so much about Hillary as well. How did that come to be? Was that something you initially planned or did it arise more organically?

I think even when we were doing the bulk of the initial work in 2012 people were already talking about her for 2016, and she'd already run in 2008. So, it had always been in our minds that the arc of her story should be that as Bill is winding down, she's gearing up, and the way that she learns during the Clinton presidency and moves on to getting her chance. Even though that was the fundamental idea, the way that happened in the show has changed a lot over time, even since last year and even during the rehearsals and previews now. That's changed to reflect things that are going on currently, and we even added in some references to things that happened while we were in rehearsals, like the email scandal. Part of the fun is also being able to play with the fact that these characters in the '90s don't know what's going to happen, but we as an audience do know. We try to put in jokes and references to the future.