A coal company says laid off workers can thank President Obama. But coal is dying for reasons well beyond politics 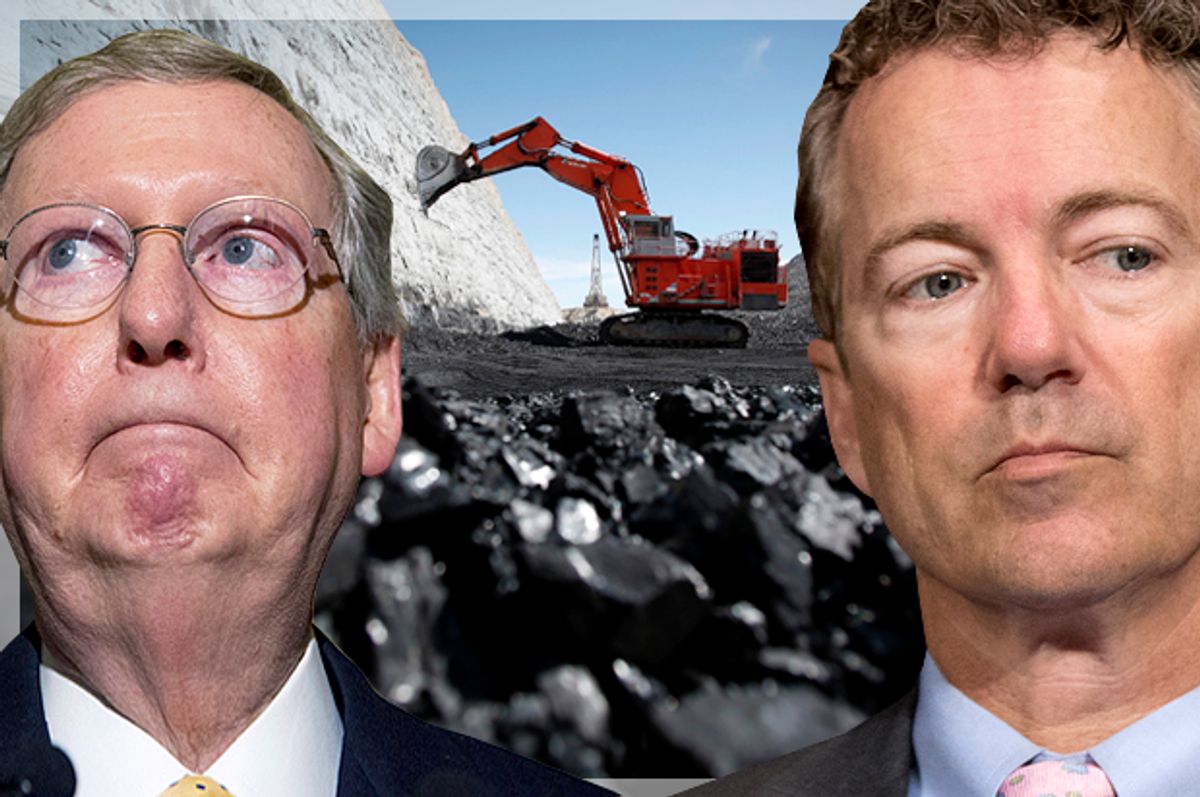 Hundreds of West Virginia coal workers lost their jobs Tuesday, and according to Murray Energy, the company that laid them off, they have "the ongoing destruction of the United States coal industry by President Barack Obama, and his supporters" to thank.

The layoffs -- and the justification given for them -- were conveniently timed to the legal battle beginning Thursday, in which Murray is one of the plaintiffs bringing suit against the Environmental Protection Agency for its proposed rule limiting carbon emissions from coal-fired power plants. Regardless of what the actual reason for the layoffs might be, you can't buy anti-regulatory propaganda like that.

The court cases that began yesterday aren't about whether man-made climate change is happening (it is), or whether coal-fired power plants are the biggest source of human greenhouse gas emissions (they are) or whether we need to leave most of our remaining coal reserves in the ground if we want to avoid potentially catastrophic changes to our climate system (we absolutely do). Instead, they hinge on ambiguous wording in Clean Air Act amendments that were passed 25 years ago that, opponents to the rule argue, could be interpreted to mean that the EPA lacks the authority to regulate greenhouse gas emissions from coal-fired power plants. It's seen as a premature argument, given that the rules haven't even been finalized yet. Regardless of what the court decides, the battle is expected to be waged all the way to the Supreme Court.

The battle for public opinion, on the other hand, is being waged on much shakier grounds: that in crafting the new regulations, the EPA has written a death sentence for King Coal, which, without the federal government's intervention, would be thriving right now. Again, that's a pretty premature argument, as the rules have yet to take effect. And it's one that singles out a scapegoat -- big ol' coal-hating Obama -- over the much more mundane reality. Yes, U.S. coal is dying: a recent Duke University study found that between 2008 and 2012, the industry lost nearly 50,000 jobs. But the downturn isn't new. Coal country's been on the decline for decades, and for reasons that go far beyond politics.

"What's killing the coal industry is not federal regulation -- it's market forces," energy analyst and journalist Richard Martin, whose book "Coal Wars" provides an in-depth look at this decline, told Salon. "The shale gas revolution has erased coal's traditional position as the low-cost fuel for power generation, and given a choice, utilities today will choose the cleaner option."

Even Murray Energy acknowledged that the natural gas boom is partially responsible for displacing coal. Technology, too, has played a role in the decline of coal jobs, as new innovations allow companies to achieve the same output with fewer workers. The best coal in Southern West Virginia and Eastern Kentucky has already been mined out; the region faces increased competition from Western states. Activists' work to retire coal plants factors into the picture as well, as does federal policy, to an extent. But analysts with the U.S. Energy Information Administration project that the industry is set in its downward path -- a conclusion they reached without even taking the anticipated impact of the Clean Power Plan into account.

All of these factors, Martin added, have been accompanied by a broader shift toward renewable energy. A new report from Bloomberg New Energy Finance, for example, found that as of 2013, the world is adding more energy capacity from renewables than natural gas, oil and coal -- combined. According to Martin, "There's no turning back from that shift."

It is a shift, unfortunately, from which coal country has yet to benefit. The aforementioned Duke study found that over the same time period in which coal jobs plummeted, nearly four times as many jobs were created by the combined natural gas, solar and wind industries -- but that few were added in the regions hit hardest by the loss.

Just as it's giving Obama way too much credit to suggest he's responsible for all of this, it's disingenuous to suggest he's gleeful at the sight of communities struggling to recover. The president's proposed 2016 budget, to that end, includes $56 million for programs to assist laid-off workers and fuel economic development in coal's aftermath. "We are in the midst of a pretty dramatic energy transition in this country that is producing a lot of very good things, from cleaner air to healthier communities to new jobs and new industries,” Jason Walsh, a senior policy adviser at the White House, told the Charleston Gazette. "While policymakers can disagree about the reasons why the coal industry is struggling, all Americans should be able to agree that these workers and communities, who are in some of the most economically distressed parts of the country, deserve help from the federal government."

That's an attitude everyone should get behind, as Martin explained in a recent interview with Salon. "When people like Mitch McConnell stand up in the U.S. Senate and decry the Obama administration’s war on coal," he said, "they’re not really helping their constituents. Every hour or dollar spent on fighting the war on coal is a resource that doesn’t go to really helping these people in places where the coal industry is not coming back."

McConnell, responding to the budget, did concede that "anything aimed at aiding these communities should be seriously considered." But he brushed off the proposal as "cold comfort" from an administration that itself caused those problems, and dismissed the overall budget as "another top-down, backward-looking document that caters to powerful political bosses on the left and never balances — ever."

McConnell, of course, has built his entire political platform on this premise. Despite all evidence to the contrary, he remains "absolutely convinced" that coal has a future in the U.S., and has vowed to do "everything I can to try to stop" the EPA from interfering with this imaginary renaissance. Most recently, he's taken to appealing directly to states to defy the EPA and refuse to submit plans for complying with its regulations. That would put them in the position of being forced to accept a plan imposed by the federal government instead of one they tailor themselves to their own needs, crossing their fingers, all the while, that the courts will eventually strike down the rule.

It's not an impossible outcome. But regardless of how the legal battle turns out, coal's best days are undeniably behind it. We can fight it, at the expense of clean air and mitigating climate change. Or we can gently, but firmly, help see it out.