Jameis Winston's accuser is suing him for alleged rape 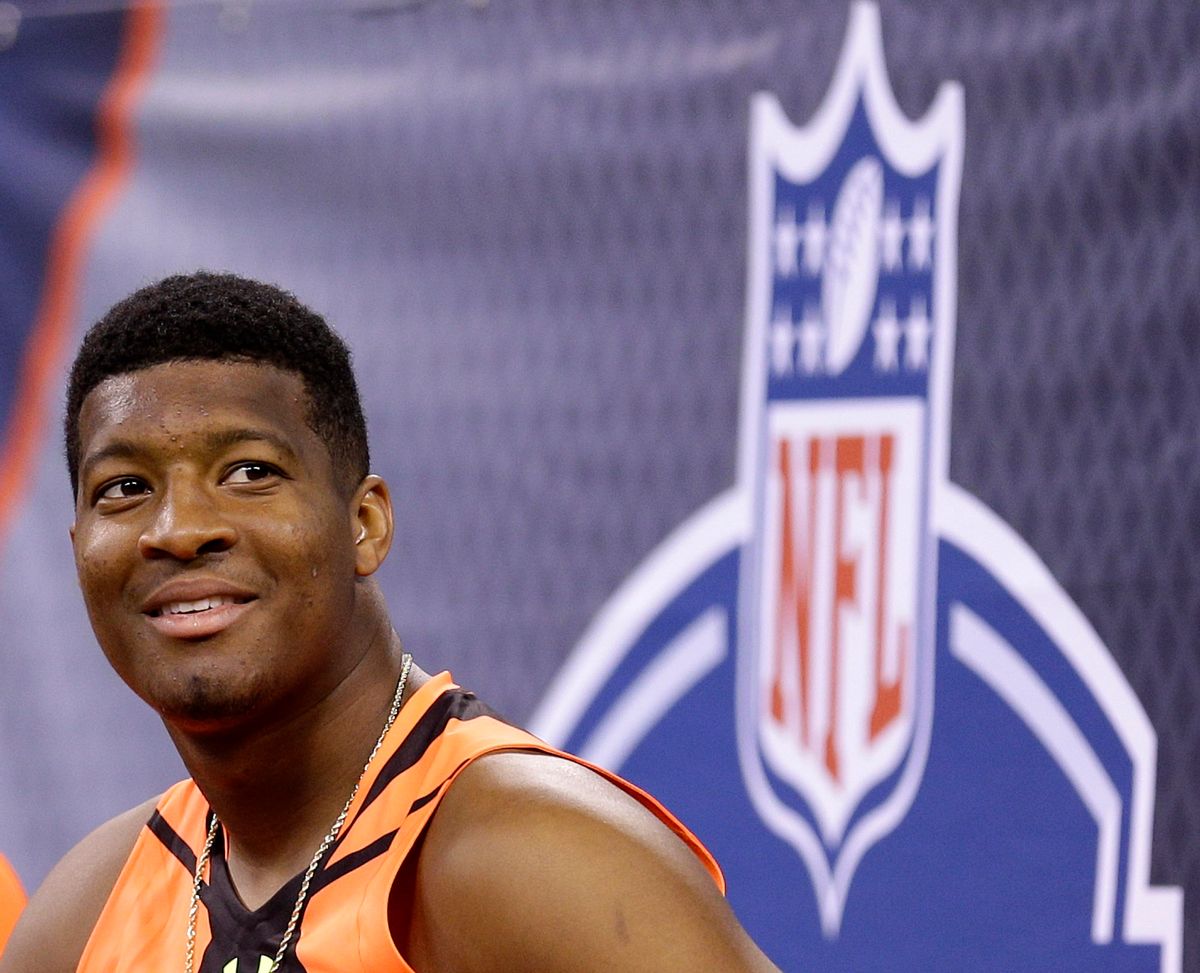 FILE - This is a Feb. 21, 2015, file photo showing Jameis Winston at the NFL football scouting combine in Indianapolis. Winston has spent much of the past two months crisscrossing the nation, sharpening his quarterback skills and trying to convince NFL teams he's learned from mistakes made off the field and ready to become the face of a franchise. (AP Photo/David J. Phillip, File) (AP)
--

Since prosecutors declined to press sexual assault charges against former Florida State University quarterback Jameis Winston, the young woman who accused him of raping her in his off-campus apartment in 2012 is taking the player to court instead. Erica Kinsman, a former FSU student, went public with her account of being sexually assaulted by Winston earlier this year, and now seeks damages from the likely NFL top pick just two weeks ahead of the 2015 draft.

Winston was cleared of university misconduct charges during a two-day student code of conduct hearing in December, and has consistently denied any wrongdoing. After a thoroughly mishandled police investigation, Tallahassee prosecutors decided not to press charges against the player, prompting Kinsman to take action against the university -- which she has sued for violating her Title IX rights and facilitating a "hostile learning environment" -- and against Winston.

One of Kinsman's lawyers, John Clune, said his client is not simply seeking justice for herself, but for other survivors as well. In a statement, Clune asserted that there should be consequences for Winston's alleged actions, and "since others have refused to hold him accountable, our client will."

"Erica hopes to show other survivors the strength and empowerment that can come from refusing to stay silent no matter what forces are against you," Clune said. "Jameis Winston in contrast has proven time and time again to be an entitled athlete who believes he can take what he wants. He took something here that he was not entitled to and he hurt someone."

The Associated Press has more details on the lawsuit:

The lawsuit, which goes into detail about the 2012 incident, accuses Winston of rape, assault, false imprisonment and emotional distress.

Because the burden of proof is much lower in a civil lawsuit than in a criminal case, Kinsman could have a better chance of winning a jury verdict if it goes to trial.

David S. Weinstein, a former federal prosecutor now in private practice in Miami, said in a civil case the standard amounts to the "greater weight" of the evidence, or "merely tipping the scales in favor of the plaintiff."

In a criminal case, prosecutors must prove a person's guilty beyond a reasonable doubt, meaning jurors must be entirely convinced of guilt.

"The scales have to be tipped all the way over to the side of the prosecution," said Weinstein, who is not involved in the case.

Weinstein also said that he thought Kinsman's chances of prevailing were good, based on the detailed allegations and multiple witness statements in the lawsuit. But that doesn't mean it will be easy.

Weinstein said he believes the process will be "unpleasant" for Kinsman, and that Winston's attorneys "will drag her character through the mud" throughout proceedings. Unfortunately, there is already evidence to support his speculation: Winston's lawyer, David Cornwell, repeatedly publicized Kinsman's name before she went public with her story, violating the common custom of keeping alleged sexual assault victims' names confidential. Weinstein added, though, that the deck isn't entirely stacked against Kinsman.

"Winston has a lot to lose," he said, "so I foresee a settlement and not a trial."