"Louie" and the bleakness of middle-aged love: Do all relationship roads have to lead to ruin?

Dating after divorce is its own kind of hell, "Louie" reminds us, even when you're dating your best friend 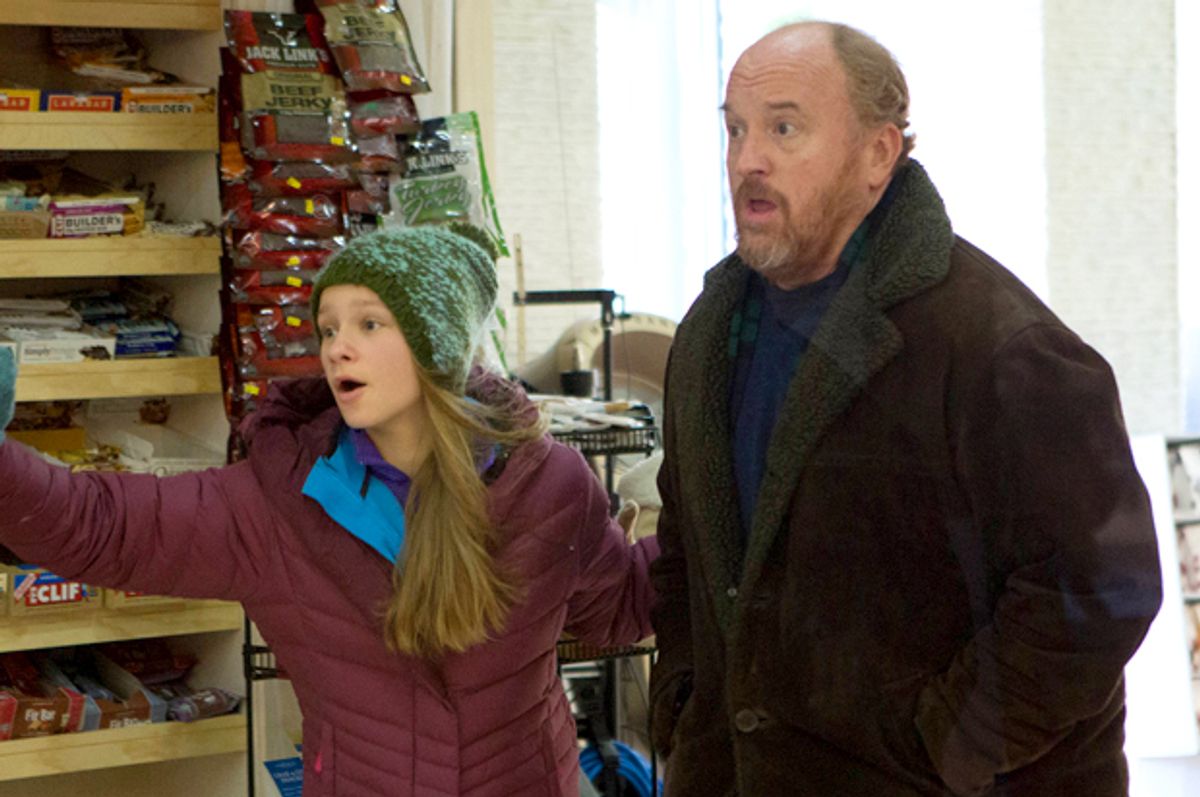 An episode of "Louie" with Pamela Adlon in it is always a good thing. As Louie's honest sounding board and straight-talking friend-turned-romantic partner, Pamela has a knack for pulling him out of his head and into the moment. Her combination of wry skepticism and mischievous affection is kind of a deadly combo for Louie’s more solipsistic tendencies, and together, they make a pretty sexy couple. They’re both single parents, they both have twisted senses of humor, and they genuinely enjoy each others’ company. Since last season, the show has flirted with their relationship as one of those classic will-they-or-won’t-they TV friend-couples contributing to the absurd American myth that buddies with sexual chemistry make the best romantic partners in the end.

In last night’s episode “A la Carte,” Louis C.K. examines vulnerability from several angles—the physical vulnerability of his alter-ego Louie having to use the bathroom while out in public (a particularly hilarious opening bit featuring the suitably horrified kids), the dreaded open mic night he’s talked into hosting (good for him for insisting on that $500) that features a depressing young aspiring comic reciting the dreadful secrets of his traumatic childhood in complete deadpan (“I used to urinate in my bed and my mother would beat me for urinating in my bed, and so from then on, I would urinate in it more.”), who Louie then counsels to try exposing his vulnerabilities with a silly voice to make the trauma, you know, actually funny, and the main plot of the episode: the uncertain future of Louie and Pamela.

Louie wants to go see “an arty French film about divorce,” which Pamela pretty quickly surmises will not be a particularly fun date. (As the person who drags a less-than-enthused partner on thrill-ride dates like Eugene O’Neill plays, I felt the stab of recognition that “Louie” serves up so well.) And oh, the reality of it is worse than the idea, so Pamela, with a twinkle in her eye, yanks his pants open and tells Louie “you’re going to do a Pee-wee Herman” in the movie theater, and the sexcapades escalate — in theory — but the joke’s on Louie, of course, nobody’s getting a blow job, it’s just Pamela’s way of lightening the mood on the screaming black-and-white existential horror playing out on screen in front of them.

“Louie” is not being subtle in the set-up here, and over pasta after the film, the couple plans a sleep-over that night. Your house or mine?, that familiar refrain. “What if they’re the same place?” Louie asks her, and if the needle on the Italian opera record playing in the background had screeched to a sudden halt, the mood of the scene could not have shifted more drastically. Pamela deflects by changing the subject, and the horror on Louie’s face couldn’t be more palpable — his big moment of vulnerability, which was supposed to end in triumph, obviously shot down. Things were so much fun, Pamela admonishes him, and then you said that thing and now it’s scary.

Pamela’s thesis for shooting down Louie’s proposition is, in many ways, a classic pop culture man’s role: We’re having fun, hanging out and having sex, so why ruin it with commitment and cohabitation? When you add in the extra layer of their life experiences — this wouldn’t be the first rodeo for either of them — the cold logic of Pamela's defense becomes not about prolonging an adolescent fun-jones but about clinging to a hard-won independence and self-understanding.

“You were married, you got divorced. I had a kid with a guy; it was awful. Didn’t we learn anything?” she demands. “What did you learn?” he asks, clearly hurt. “There’s more than one way to be together. Do all roads have to lead to ruin?”

Pamela’s chart for the progression of their relationship, should they choose that road, is ruinous. Her alternative: friends —> sex —> love —> Italian food —> have your own places —> schtupp another person —> still friends, yay! does sound appealing. Like the classic pop culture girlfriend, Louie wants to lock things down with Pamela because he’s afraid of losing her to someone else; Pamela rightly points out that he doesn’t “have her” to begin with.

“And then what?” is the question Louie can’t help but ask. Pamela's logic is, in a way, unassailable. But it's also human to want to plan a future with a partner, even if that future isn't as shiny and new and unexplored as it once could have been. When Pamela invites Louie to consider a beautiful younger woman across the room and how he should also want to have sex with her, the camera can’t help but include the whole table — two couples clearly enjoying the casual intimacy of a double date. They’re laughing easily, they look happy — all four of them. It’s a portrait of an alternate-time version of Louie and Pamela, had they met when they were younger and could have forged a more innocent path together.

Some good news for saying scary things aloud, though — the open mic guy with the sad stories takes Louie's advice and ends up on "The Tonight Show," of all places, reciting his bedwetting stories in a high-pitched silly voice, and he kills. What a great meta tribute to Adlon, whose own voiceover work is legendary, and to the spirit of "Louie," which has always been fearless about turning potentially bleak topics, like middle-aged loneliness, into hilarity by tweaking the tone and letting the comedy and the tragedy get a little too close for comfort.

This could be the beginning of the end for Louie and Pamela as a couple (Adlon is getting her own FX show, "Better Things," which she will write and star in, and Louis C.K. will direct, so her character's appearances on "Louie" might become less regular), but do we ever really know when the end is beginning until it's here? "Louie" wouldn't be "Louie" if Louie got what he wants — but, as a good man has counseled us all, if he tries to get out of his own head sometimes, he just might get what he needs. Louie takes the sleepover, even though he knows they'll part ways in the morning. He tries to live for the evening, not for the imaginary fearful future when this all-too-amazing woman dumps him for someone else, or just something else.

Just as the show flipped the gendered expectations of how Pamela and Louie envision the next stage of their relationship, it also obliterated the ridiculous trope that your happily-ever-after is your hot sidekick who's been waiting patiently for years for you to come to your senses and see him or her as more than a friend. That's a bedtime story for children, "Louie" tells us, a John Hughes fantasy. Grow up. Friendships don't magically turn into life-partnerships just to make your life easier. Sometimes the farthest they can go is Italian food and dirty stuff and genuine affection. Those kids at the table in the corner on the double date? They can believe in that myth if they want. Adults? They take what they can get, and hope, at least for an evening, that it can be enough.