Time magazine's fetish for power: The ugly truth about its annual "most influential" issue

The newsweekly released its latest "Time 100" list this week, proving yet again that influence trumps journalism 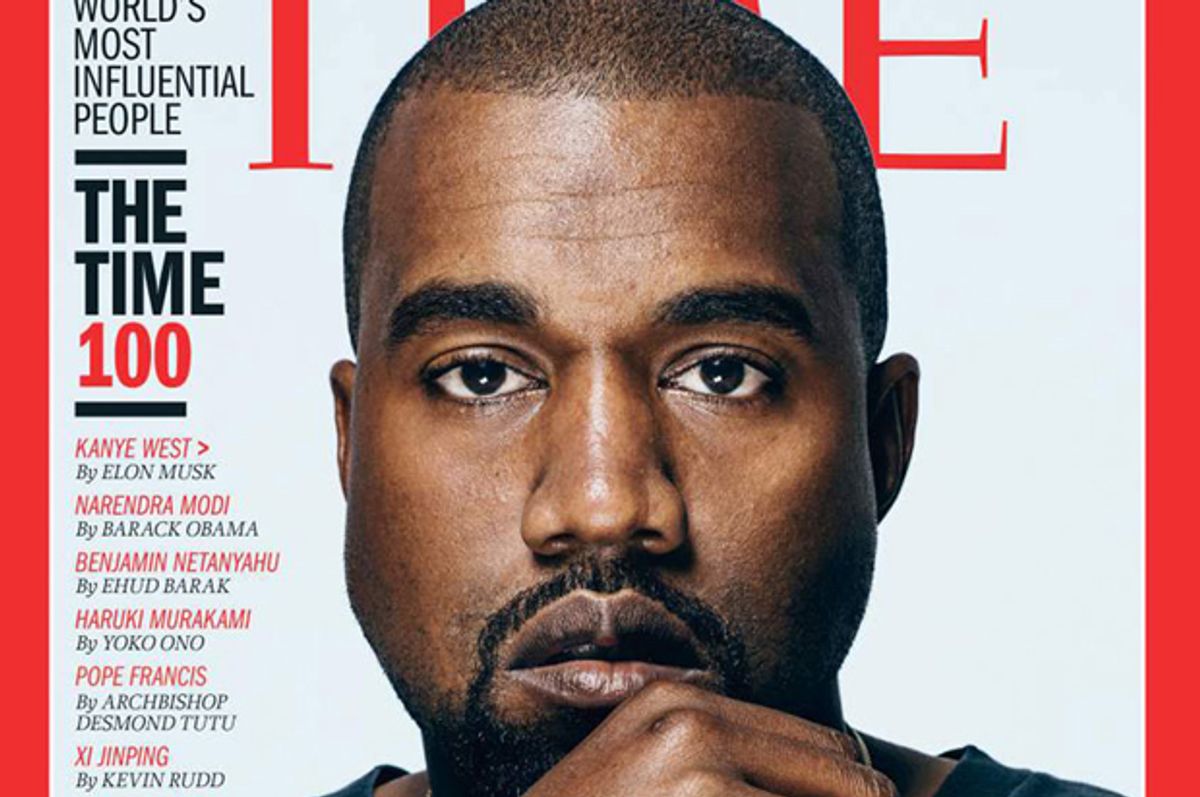 The excerpts that Politico's Mike Allen shared with the world summed up everything that is alternately baffling, snore-inducing and infuriating about Time's annual list of what it calls the "100 most influential people" in the world. There were tributes to Hillary Clinton by Steve Jobs' widow Laurene ("She is one of America’s greatest modern creations"), to the Koch Brothers by Rand Paul ("What is underappreciated is their passion for freedom") and, for good measure, one to Elizabeth Warren by Hillary Clinton, which will probably be worth at least a couple of segments on CNN. ("She never hesitates to hold powerful people’s feet to the fire.")

It's all there: The backslapping. The substance-free, ghostwritten commendations. The carefully broad politics. The eye-glazing dullness. Welcome to another Time 100, folks!

I'll say this much for Time: At least it is unashamed of its position as soothing balm to the rich and powerful. The Time 100 is perhaps the purest annual distillation of the magazine's ethos. Time's founder Henry Luce was, as the New York Times once put it, a "staunch Republican," but it has long since shed any overt right-wing leanings in favor of a soft corporate centrism. More than any particular ideology, Time's overriding devotion is to the establishment in all its forms. It's no accident that two out of its last three former editors went on to work with the U.S. government; one of them, Richard Stengel, is still at the State Department.

And so we get the Time 100, which is such an extended mutual-masturbation session that it should probably be sold on the top shelves next to the porn. The strangest thing about the list is that, apart from a couple of super-villains thrown in every year to maintain the pretense that Time is portraying the world "as it really is" (2015 features Kim Jong Un and the head of Boko Haram), the magazine insists upon recruiting only friends and admirers to gush about each one another in its pages. You can see why they do it, of course—how else are you going to get so many famous people to write for you? But this pandering to celebrity comes at a rather high cost, since it methodically leeches away any potential interest the issue might have. Instead, we get the blandest platitudes available, with all critical analysis removed.

This is mostly forgivable in the entertainment sections, where one set of rich celebrities bestows its favor upon another set of rich celebrities. 2015's edition is home to the usual combination of head-scratching (Elon Musk on Kanye West?) and thuddingly obvious (Amy Poehler on Chris Pratt) author-subject combinations. All of the mini-profiles are written in the same style, which roughly recalls a pleasant but instantly forgettable toast at the wedding of a work colleague. Nobody looking for insight or surprise would be pleased, but it's hard to get too worked up about any of it.

It is in the political sections, though, that the more pernicious side of the Time 100 truly comes into play, for while it is fine that Julianne Moore isn't raked over the coals by the magazine, it's less fine that a series of hugely complex, divisive and important world leaders are all given such a warm welcome.

Thus, you won't find a mention of, say, Indian prime minister Narendra Modi's past as a highly sectarian politician who many think was complicit in one of the most horrific massacres in the country's history. Why bother when you can get President Obama to hail Modi as a worthy heir to Gandhi? With one or two exceptions, moreover, the magazine's decisions about when to be critical of foreign leaders (all domestic figures from both left and right are treated with equal reverence) track almost exactly with current U.S. government policy. Angela Merkel is a shining hero, while Benjamin Netanyahu finds himself mildly rebuked.

While slightly stomach-turning, all of this does serve to show just how deeply ideological a supposedly non-ideological venture like the Time 100 is. Beyond the thirst for celebrity approval, beyond the kowtowing to politicians, the ultimate goal of the issue is to lead the rest of us in a toast to power and the status quo—which makes sense, since the culmination of the issue is a huge, lavish party where its subjects get to rub shoulders with each other. Forget journalism. There are red carpets to walk!