Think of R.E.M. as Berry/Buck/Mills/Stipe? Just wait until you see them with Thurston Moore, Billy Bragg and more 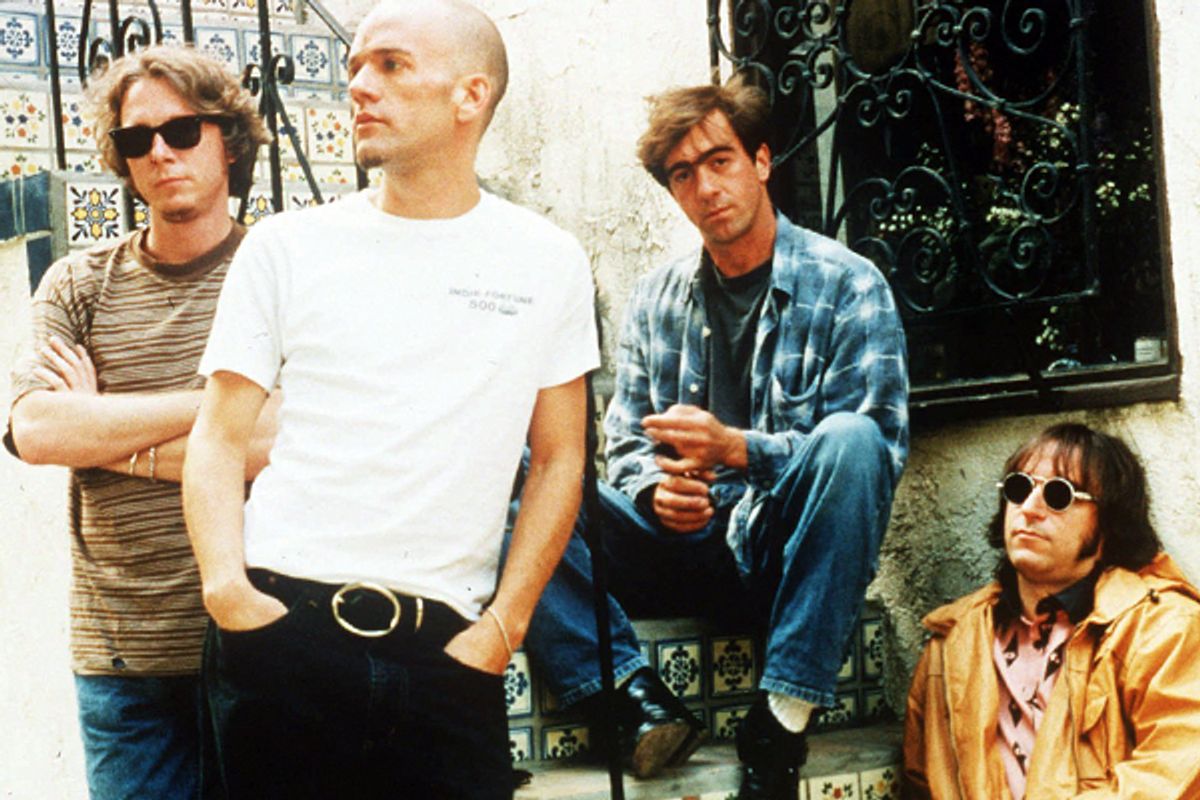 Unlike many bands, R.E.M. never shied away from having guests perform on their songs, either live or on record. These collaborations produced some of the group's most indelible moments -- from B-52s member Kate Pierson's brassy hollers on "Shiny Happy People" and keening harmonies lacing through "Me In Honey" and Patti Smith adding ghostly, longing gravitas to "E-Bow the Letter" to Peaches spicing up “Alligator Aviator Autopilot Antimatter” with bratty punk charm and KRS-One adding funky hip-hop flair to "Radio Song."

But in addition to these notable appearances, R.E.M. has teamed up with plenty more high-profile names. Some of these performances happened spontaneously during concerts; some were deliberate studio or TV collaborations; and still others were happy accidents. Here are 10 of R.E.M.'s most overlooked (or little-known) collaborations and collaborators.

In June 1984, legendary Byrds guitarist and Rickenbacker enthusiast Roger McGuinn joined R.E.M. onstage in New Jersey to perform a pair of songs (including "So You Want to Be a Rock 'n' Roll Star" and Them's "Gloria") for an MTV special, "Rock Influences: Folk Rock." McGuinn would join the band at a 1985 Florida show as well.

Not only did high-quality video of McGuinn's New Jersey appearance surface in recent years -- so did pristine video taken at the same show featuring R.E.M.'s run-through of the Lovin' Spoonful's "Do You Believe In Magic?" with the song's writer, John Sebastian.

R.E.M.'s last major North American tour featured Modest Mouse as one of the opening acts. At the time, that band featured Smiths guitarist Johnny Marr as a sideman. Naturally, the ever-affable Marr hopped onstage several times with R.E.M. to add some extra chime to "Fall On Me."

When it came time to add saxophone to songs, the members of R.E.M. were judicious not only about how often they used the instrument -- but who played the part. For the "Document" tune "Firehouse," the job went to Steve Berlin, a saxophonist known for his work with the Blasters and Los Lobos. Unlike many '80s sax lines, Berlin's contribution still sounds fresh and vital today.

Billy Bragg and Robyn Hitchcock collaborated numerous times with R.E.M. One of the most memorable occasions occurred the week "Out of Time" was released in March 1991, at the tiny London club the Borderline: A collaborative troupe known as Bingo Hand Job -- a.k.a. the members of R.E.M. under assumed names, Bragg, Hitchcock and the Chickasaw Mud Puppies -- did two nights of shows. Originals and covers dominated the setlist; in fact, the beatboxing version of Suzanne Vega's "Tom Diner" originated here.

Perhaps the best tune on R.E.M.'s swan song, "Collapse Into Now," is "It Happened Today." As if prominent Mike Mills vocals weren't enough of a bonus, the proud, mandolin-driven gem also has singing from Pearl Jam's Eddie Vedder blended into its harmonic tapestry.

Of course, this duo is responsible for producing both 1983's "Murmur" and 1984's "Reckoning." However, the pair are also well-respected, long-time musicians -- and on the 2008 tour stop in Raleigh, North Carolina, they joined R.E.M. onstage to create a formidable wall of jangle on the chestnut "Sitting Still."

R.E.M. were one of the first big champions of Radiohead; the Oxford, England, group opened a leg of the "Monster" tour when they had just released 1995's "The Bends." And so when 1998's Tibetan Freedom Concert rolled around -- and R.E.M. were playing their first gig without drummer Bill Berry -- Radiohead frontman Thom Yorke showed up to lend moral support (and sing Patti Smith's lines) on "E-Bow the Letter."

Technically, this collaboration on a cover of Velvet Underground's "Pale Blue Eyes" only involved Michael Stipe, not the entire band. However, this rare, lo-fi performance filmed by renowned photographer Laura Levine features Stipe's one-time Community Trolls bandmate on guitar -- in a performance "recorded earlier that day on a Walkman," Levine notes.

"Crush with Eyeliner" was one of the more distorted-sounding songs on "Monster," so it's easy to miss its guest: Thurston Moore of Sonic Youth, who added creepy vocal color to an already ominous song about obsession.