America is just gross: Our super-sized appetites -- and the lobbyists who help make us obese 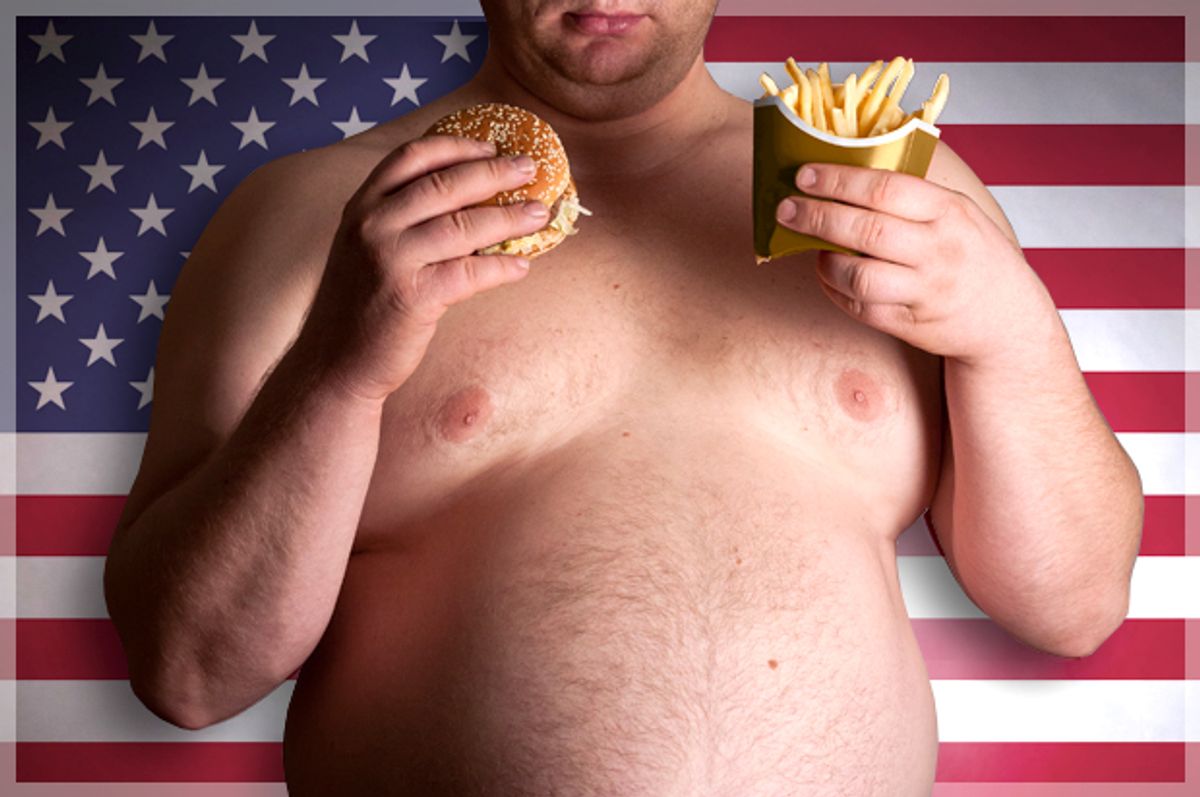 America, it seems, is hard-wired to over-consume both food and fuel. Policy struggles to reduce obesity and slow climate change have so far produced few tangible results. The nation’s annual CO2 emissions are actually increasing again, up another 2 percent in the past two years alone. As for overeating, one out of three adults in America is now obese, with no decline in sight.

As mitigation efforts continue to fall short, we may be tempted to think about adaptation -- that is, finding ways to live with the new health and climate risks we seem unable to prevent. Adapting while continuing to over-consume is a distant second-best option, but political leaders face increased temptation to pivot in that direction.

When it comes to over-consuming both food and fuel, the United States is in a league by itself. CO2 emissions per capita in the United States are twice as high as in the European Union, and America’s 34 percent adult obesity rate is twice the industrial world average. America’s obesity rate is actually seven times as high as the rate in Japan. The extreme nature of America’s over-consumption ought to create plenty of room for the nation to cut back, yet the drivers are so deeply rooted in the nation’s institutions, culture and resource endowments that significant corrective actions become nearly impossible.

America’s extreme over-consumption of both food and fuel emerges in part from the nation’s unique cultural aversion to taxes, especially consumption taxes. Going back to President Roosevelt in the 1940s, leaders of both parties have rejected taxes on consumption as “regressive” on low- and middle-income citizens, which indeed they are. As a result, only 8 percent of tax revenues in America come from taxes on general consumption, compared to a 21 percent average for all rich countries.

Grocery purchases are also less taxed in the United States, helping to make food cheap. Many European countries apply a value added tax (VAT) to food, with rates ranging from 5.5 percent in France to 7 percent in Germany, and 25 percent in Sweden and Denmark. Retail food prices in the European Union are 30 percent higher than in America, one reason obesity rates are so much lower.

Will the United States ever be able to alter its tax policies to discourage excessive fuel and food consumption? The nation’s basic resource endowments plus its 18th-century political institutions always seem to get in the way. Taxing fossil fuel consumption is hard in America compared to Europe, because America’s distinct fossil fuel endowments have spawned wealthy industries motivated to block such taxes. America’s proven oil, gas and coal reserves are more than twice as large as in all of the EU countries combined. America’s equally distinct political institutions also provide too many veto points to the private fuel lobbyists, and the private citizens, opposed fuel taxes. In 1993, the House of Representatives passed President Bill Clinton’s Btu tax, but a vote was never taken in the Senate so the measure died. The same thing happened in 2009 with cap-and-trade. In 2014, President Obama’s EPA proposed a new rule to cut emissions from America’s power plants, but this proposal has already triggered lawsuits and threats of non-compliance from coal states. Lacking Congressional endorsement, the rule can be weakened or reversed after Obama leaves office.

In a parallel way, America’s unique political institutions have given the beverage industry unusual leeway to reject taxes on caloric soda, and food companies the option to continue advertising junk food to children. Congress even allows the use of federal money to purchase soda and candy under the SNAP program.

America is thus fundamentally different from Europe. American exceptionalism may be praiseworthy in most respects, but a tendency to consume too much food and fuel seems one unfortunate part of the package. Given the political limits we face in our efforts to mitigate obesity and climate change, we are naturally tempted to pivot toward adaptation.

In the area of climate change, adaptation options are superficially attractive for many Americans. Yale economist William Nordhaus has calculated that even if global warming continues with a temperature increase of 2.5 °C by 2070, roughly 90 percent of the American economy will remain only “lightly or negligibly impacted.” The most heavily impacted sectors will be farming, forestry and fishing, yet these make up just 1.2 percent of the American economy. The Intergovernmental Panel on Climate Change has even calculated that longer growing seasons, increased average rainfall, and more carbon fertilization of crops could help many American farmers in the short run.

For America, adaptive self-protection against climate change could resemble what we saw after Superstorm Sandy in 2012, when Congress promptly appropriated $50 billion in supplemental funding to rebuild the Jersey Shore, with upgrades for increased climate resilience.  This was expensive, but an easy move to make politically. Members of Congress have long survived in office by bringing federal money (“pork”) back to their districts through defense contracts, bridge and highway projects, VA hospitals, farm subsidies, sewage treatment plants, Small Business Administration loans, or FEMA outlays. Climate resilience outlays can help to keep the pork barrel full.

But if the United States, the second-largest greenhouse gas emitter after China, pivots toward adaptation and fails to deliver on mitigation, the inclination of other countries to reduce their own emissions will be undercut. China’s recently announced “intent” to stop increasing its CO2 emissions by 2030 will not likely be honored if America abandons mitigation and turns toward self-protection. Atmospheric CO2 concentrations will then increase at a faster rate, accelerating the pace of climate change and imposing steep costs on more vulnerable tropical countries, which lack the options or resources to self-protect. In the end, even the United States will not be able to self-protect, given the likelihood of ice sheet loss and a major sea level rise.

In the case of obesity as well, the adaptation temptation looms. America is already turning to options such as new medical drugs, surgeries and physical accommodations for those who become obese. Medical treatments do get results. Between 1994 and 2010, obesity prevalence among diabetic Americans increased from 35 percent to 57 percent, yet the age-adjusted death rate among diabetics declined from 36 percent to 17 percent. Relying on treatment rather than prevention is, after all, a distinctly American approach to healthcare. By some calculations, 70 percent of the illnesses currently being treated in the United States could have been prevented. This is also one reason per capita healthcare costs in the United States are two and a half times greater than the rich country average. Under-investing in prevention also leaves America with inferior health outcomes compared to other rich countries. Out of 17 wealthy countries, the United States ranks last for life expectancy at birth for men, and next to last for women. An adaptation response to obesity would put America further behind.

Obesity adaptation also fails for America on equity grounds. The groups in the United States most likely to become obese — racial minorities, single-parent households and those with only a high-school education or less — are those least able to access quality medical care. They will thus be least likely to get adaptation assistance. Obesity in America is twice as high among children whose parents lack a high-school diploma, and these children are often off the medical grid. Adaptation and treatment options can work well enough for upper-income and college-educated Americans, because they have ready access to medical services and more often get the social reinforcement needed to avoid becoming obese in the first place. For Americans with less education and fewer resources, an adaptation approach is far less promising.

When it comes to fuel and food excess, then, adaptation responses will be a road to greater inequality in two respects. For climate change, poor tropical countries abroad will suffer the most if America opts for self-protection. When it comes to obesity, America’s own poor will be left behind.

Robert Paarlberg is the B.F. Johnson Professor of Political Science at Wellesley College and Adjunct Professor of Public Policy at the Harvard Kennedy School. His new book from Oxford University Press is titled "The United States of Excess: Gluttony and the Dark Side of American Exceptionalism."