The banker behind Hitler's shadow empire

Hjalmar Schacht was the most powerful minister in Germany, an economic "wizard" with a destructive plan for growth 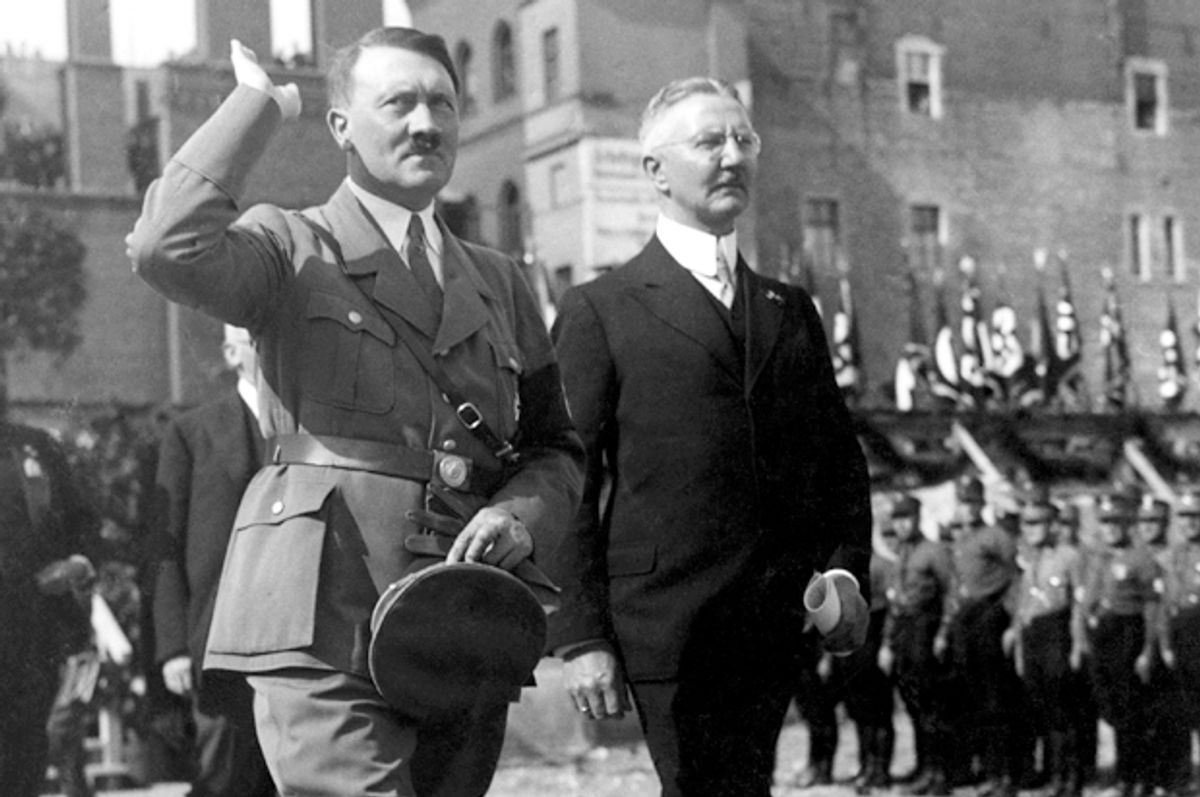 By mid-1936 Spain was economically backward, socially volatile, and politically explosive. After a rebellion’s coup failed and with a dawning civil war on their hands, it was unsurprising that the two Spains sought supplies from the great powers to make up for their deficits in armaments and technology. Foreign supplies were, as of the coup, a necessary—if not sufficient—element of victory in the dawning civil war. But only one side received the decisive support that allowed it to overcome its initial material, territorial, and financial inferiority, and it was not the side that had the initial economic, geographic, and strategic advantage. Eventually fascist intervention allowed Franco to undertake another Reconquista, cleansing Spain not of Moors but of Reds. In the thirty-two months of protracted war, all powers would somehow change their original strategic stance toward the “Spanish question,” but not enough to alter the strategic decisions at the dawn of the conflict. The course of great power diplomacy was dictated, through a web of interlocked and synchronized decision making, on a momentous day: July 25, 1936.

Intentions notwithstanding, Premier Léon Blum ultimately gave in to domestic and foreign political pressures by declining José Giral’s “fraternal” aid request and choosing to preserve his own Front Populaire at the expense of the Spanish one. This sequence of events proved harmful both in terms of fact and appearance. The French did not supply the Republic but provided plenty of excuses for others to arm the Nationalists. Britain’s formal neutrality fi t its policy objective of localizing the war in Spain while containing political and naval strategic considerations. The “continental arrangement” sought by Anthony Eden’s Foreign Office would not come, yet appeasement of the dictators with an eye to Moscow had already fundamentally altered Britain’s centuries-old strategy of balancing continental hegemons. Through official inaction and selective favors to the Nationalists, the British too undermined the Republic. A similar conclusion can be reached about the behavior of the United States: FDR’s government prioritized the protection of its investments in Spain, choosing a middle path that only further isolated moderate Republicans. The Soviet Union did sell war material to Madrid, but Soviet involvement often contributed to important rifts within the Republican government. All in all, Moscow ultimately contributed less to the Republican cause than originally believed. Foreign investors understood the implications of these diplomatic decisions very early in the war, and, fearing both Republican defeat and Communist victory, lacked trust in the Republican peseta for the remainder of the conflict.

After the fateful July 25 the two decisive intervening powers in the Spanish Civil War were therefore Fascist Italy and Nazi Germany. Hitler and Mussolini decided on intervention in favor of Franco’s Nationalists independently, yet within hours of each other. Their analogous answer to the Spanish question would bring them closer together; but whereas Mussolini merely continued his foreign policy objective of ending the left-leaning Spanish Republic, Hitler challenged his traditional Reich diplomatic service by betting on Francisco Franco.

It would prove to be a lucrative gamble. The contrast between the two decisive fascist interventions on behalf of the Nationalists will serve to highlight the uniqueness of Nazi designs. As will become clear, Nazi intervention was not driven by ideology. While Italian leadership worried primarily about international appearances, the Germans—often ruthlessly—played their hand differently, obtaining concessions fully compatible with their domestic economic needs. In a matter of months Spain would move decisively toward becoming an informal German colony. Unlike the Führer’s daring foreign policy, Germany’s grand economic strategy did not originate with Hitler—who was uninterested and largely incompetent in financial affairs—but with a man who was, at the time of the Civil War’s outbreak, his most independent and powerful minister: Dr. Hjalmar Schacht.

The macroeconomic quandary was anything but straightforward. Although employment had seen a marked improvement since early 1933, with such depressed exports in the context of low international trade it seemed impossible to reduce the large (and growing) trade deficit. The problem was compounded by two interwoven, politically driven obsessions: maintaining the international value of the Reichsmark and resisting inflation, lest it remind the German public of bleaker Weimar days. At the time Germany’s closest trading partners were competing to see how swiftly they could abandon the “fetters” of the international gold standard of pegged exchange rates, gaining world export market share through cheaper currencies. If there was ever a currency war, this was it.Hitler’s decision on July 25, 1936, to back Franco was not the only one he took while at the Bayreuth Festival – the yearly Richard Wagner extravaganza he never missed – that shaped German involvement in the Spanish Civil War. Two years before, on July 26, 1934, he had summoned Schacht, president of Germany’s central bank, the Reichsbank, to Bayreuth for a private audience. The chancellor could ill afford to immerse himself in Wagner; the strains of a foreign exchange crisis had almost claimed the life of Minister of Economics Kurt Schmitt, who had suffered a stroke while delivering a speech. Schmitt’s subsequent leave of absence extended beyond the necessary recovery time; it appears that he was eager to find a way out of a seemingly impossible job. If this was so, one cannot blame him. Few within the Nazi regime liked the former head of insurance giant Allianz. They derided him as a symbol of outdated conservatism, a bulwark against the populist revolution so many Nazi “old fighters” hoped for. The paramilitary SAs (Sturmabteilung), for instance, sang sarcastically, “The stockbrokers are party members / and capital’s protector is Herr Schmitt.” Meanwhile Hitler and his Cabinet pressured Schmitt to deliver on their economic priorities. By mid-1934 only a few economies had begun pulling out of the Depression. German growth and employment were improving from the economic trough, but exports languished. During a publicized national tour, Schmitt called this a problem of “export fatigue”; he promoted “exports as national duty”—even if that involved “dumping” or selling abroad below cost.

Yet international markets did not buy Nazi promises; they expected a Reichsmark devaluation against the U.S. dollar and British sterling. It was neither the first nor the last time they would be disappointed. There was no way around it: in the summer of 1934 Nazi Germany faced a financial dilemma. Summoning the successful president of the Reichsbank to Bayreuth was part of Hitler’s plan to solve the crisis so that he could focus on other pressing political issues. A few weeks earlier, he had unleashed the Gestapo on his own SAs and other political rivals, including a former chancellor. The bloodbath, in what became known as the “Night of the Long Knives,” gave Hitler more power, while pleasing the conservative armed forces, the Wehrmacht. Yet managing the domestic and international backlash required the chancellor’s full attention. With Schmitt out and the financial crisis unresolved, it was time for a new face: at Bayreuth Hitler offered Schacht the Economics Ministry.

In his unashamedly unapologetic autobiography, Schacht claimed he already foresaw the dangers inherent in Hitler’s unchecked power, yet the evidence suggests that, if he did, Schacht did not let it interfere with his accumulation of power. He wanted the new portfolio to complement his second coming at the Reichsbank, and it is plausible that he had been working behind the scenes to oust Schmitt, a man he never considered his intellectual equal. But then again, who was?

The result of the Bayreuth meeting was the financial equivalent of the papal union of temporal and spiritual power: henceforth Schacht wielded unprecedented power over both monetary and fiscal affairs. Within months foreign media began addressing him as “Germany’s economic dictator,” while expressing confidence in his able management. Markets agreed, reacting positively to his appointment. The domestic media was no less exultant. But given the many constraints on Depression-era German economics, which path was right? The answer had escaped Schmitt and his predecessor, Alfred Hugenberg. To Schacht, however, it seemed clear: the Reich’s salvation required the emphatic— or, rather, ruthless—application of nationalist economic principles he had developed throughout his meteoric career. Schacht was not the only successful economic nationalist in the Depression. Yet it was his economic framework that changed the face of the German economy, its foreign economic relations, and eventually drove the type of foreign intervention the Nazis brought to warring Spain.