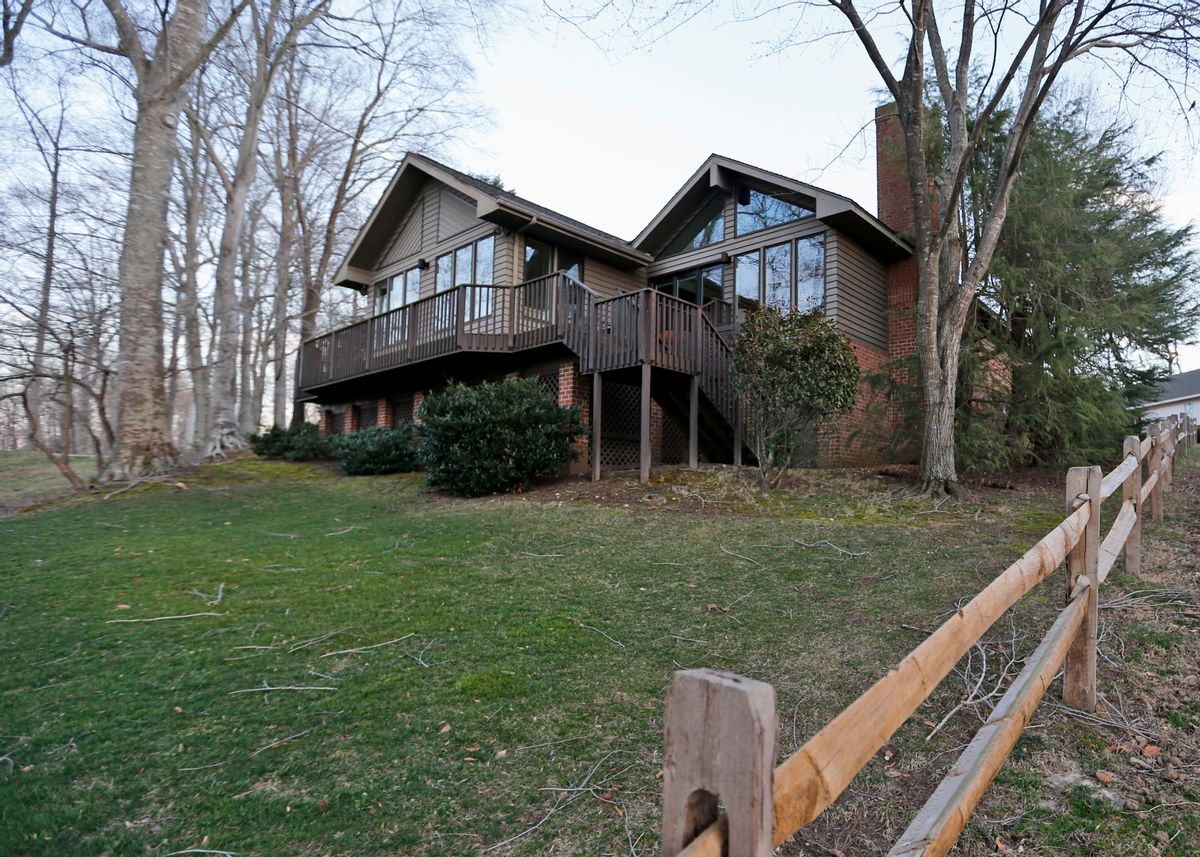 CORRECTS SPELLING OF HINCKLEY - In this photo taken March 18, 2015, the home of John Hinckley's mother in the Kingsmill resort in Williamsburg, Va. The last man to shoot an American president now spends most of the year in a house overlooking the 13th hole of a golf course in a gated community. He takes long walks along tree-lined paths, plays guitar and paints, grabs fast food at Wendys. He drives around town in a silver Toyota Avalon, a car that wouldnt attract a second glance. Often, as if to avoid detection, he puts on a hat or visor before going out. These days, John Hinckley Jr. lives much of the year like any average Joe: shopping, eating out, watching movies at Regal Cinemas. (AP Photo/ Steve Helber) (AP)
--

The last man to shoot an American president now spends most of the year in a house overlooking the 13th hole of a golf course in a gated community.

He likes taking walks, plays guitar and paints, eats at Wendy's and drives around in a Toyota. Often, as if to avoid detection, he puts on a hat or visor before going out.

John Hinckley Jr. lives much of the year like any average Joe: shopping, eating out, watching movies.

Hinckley was just 25 when he shot President Ronald Reagan and three others in 1981. When jurors found him not guilty by reason of insanity, they said he needed treatment, not a lifetime in confinement. The verdict left open the possibility that he would one day live outside a mental hospital.

For the past year, under a judge's order, Hinckley has spent 17 days a month at his mother's home in Williamsburg, a small southeastern Virginia city. Freedom has come in stages and with strict requirements: meeting regularly in Williamsburg with a psychiatrist and a therapist, volunteering. It has all been part of a lengthy process meant to reintegrate Hinckley, now nearing 60, back into society.

Court hearings are set to begin Wednesday on whether to expand Hinckley's time in Williamsburg further — possibly permanently.

That leaves some in the place he'd call home wondering: Is he ready for life on the outside? And are they ready for him?

Local real estate agent John Womeldorf always points out the street where Hinckley's 89-year-old mother lives if he's showing a house in the same resort community. He doesn't want new homeowners to be surprised after they've moved in.

"I just matter-of-factly ask them 'Do you remember the guy that shot President Reagan?' And usually they do and I say, 'Well his mother lives here and he gets released a number of times a year and comes and stays with his mom,'" Womeldorf said.

The news has deterred maybe one or two buyers, he said. "It's been a non-issue."

Not so for others. Cabot Wade, a musician who gave Hinckley guitar lessons, said he never felt Hinckley was violent or dangerous. Nevertheless, he said, "Nobody will touch him with a 10-foot pole."

In hearings before U.S. District Judge Paul L. Friedman, doctors have testified that Hinckley's psychosis and major depression have been in remission for decades and that, while he still has a narcissistic personality disorder, its effects have diminished. Psychological testing shows Hinckley's dangerousness risk is "decidedly low," Hinckley's longtime lawyer, Barry Levine, said during the most recent hearings over his release that ran intermittently from late 2011 through 2013.

For decades, Hinckley was confined to St. Elizabeths Hospital in the nation's capital. But Judge Friedman has been allowing him freedom in stages starting with a 2003 order: at first, day visits outside the institution, then local overnight visits.

Starting in 2006, Hinckley was allowed three-night trips to Williamsburg, then four, then more. In late 2013, Friedman approved the current 17-day stretches. Friedman said he was persuaded Hinckley was not a danger and that the longer stays might "provide new opportunities for employment and structured community activities."

In Wednesday's hearing, St. Elizabeths and Levine are expected to call for even more freedom. Prosecutors, however, have consistently opposed Hinckley's release, arguing he has a history of deceptive behavior and troubling relationships with women. During the last hearings, they cited a July 2011 incident in which he went to a bookstore instead of a movie and then lied about it. The Secret Service, whose agents sporadically tail Hinckley, reported he looked at shelves that contained books about Reagan and his attempted assassination, though he didn't pick anything up.

"Mr. Hinckley has not shown himself ready to conduct the hard work of transitioning to a new city," prosecutor Sarah Chasson said in 2011.

Experts not involved in Hinckley's case said that people like him can successfully transition back to a community and that there are tools to evaluate whether they remain dangerous, though there are limits. That's why the standard approach is to give freedom incrementally and monitor, said Dr. Paul Appelbaum, a professor of psychiatry at Columbia University and a past president of the American Psychiatric Association.

Hinckley's time in Williamsburg is highly scripted. He lives with his mother, Jo Ann, in the community of Kingsmill. He volunteers and drives alone, but only to places where "people will be expecting him." He must avoid "areas where the president or members of Congress may be visiting."

The aim is to help him rebuild some semblance of a normal life: to hold a job, make friends. But his progress has been halting, hampered by his notoriety.

Several organizations turned him down for volunteer positions before the librarian at Eastern State Hospital, a facility for the mentally ill, agreed to take him. "Not everyone was real happy about it," Sandra Kochersperger said.

Hinckley was "very quiet" and "very sweet," she said. He made copies and shelved books.

"I think John's paid for what he did. He was in a totally different mind at that time. He was psychotic," said Kochersperger, who retired in 2013. "I think he needs to be given the opportunity at this stage to try to have some kind of a life."

Some other residents are also accepting, but others are unwilling to forgive. Kingsmill resident Joe Mann, 73, said Hinckley should remain confined.

"All it takes is one slip, one flip of whatever in the brain caused him to do what he did before," he said.

Hinckley's attorney has called those concerns are unfounded, and notes that Hinckley's elderly mother helps supervise him. Lawyers have discussed the inevitable: She will die.

"Time is not our friend. This thing has a growing urgency to it," Levine told the judge in November 2011.