"We do have a very good sex life": Gay men with straight wives are coming out -- as happily married

"Mixed-orientation marriages" have always existed, but now they're in the middle of the marriage equality battle 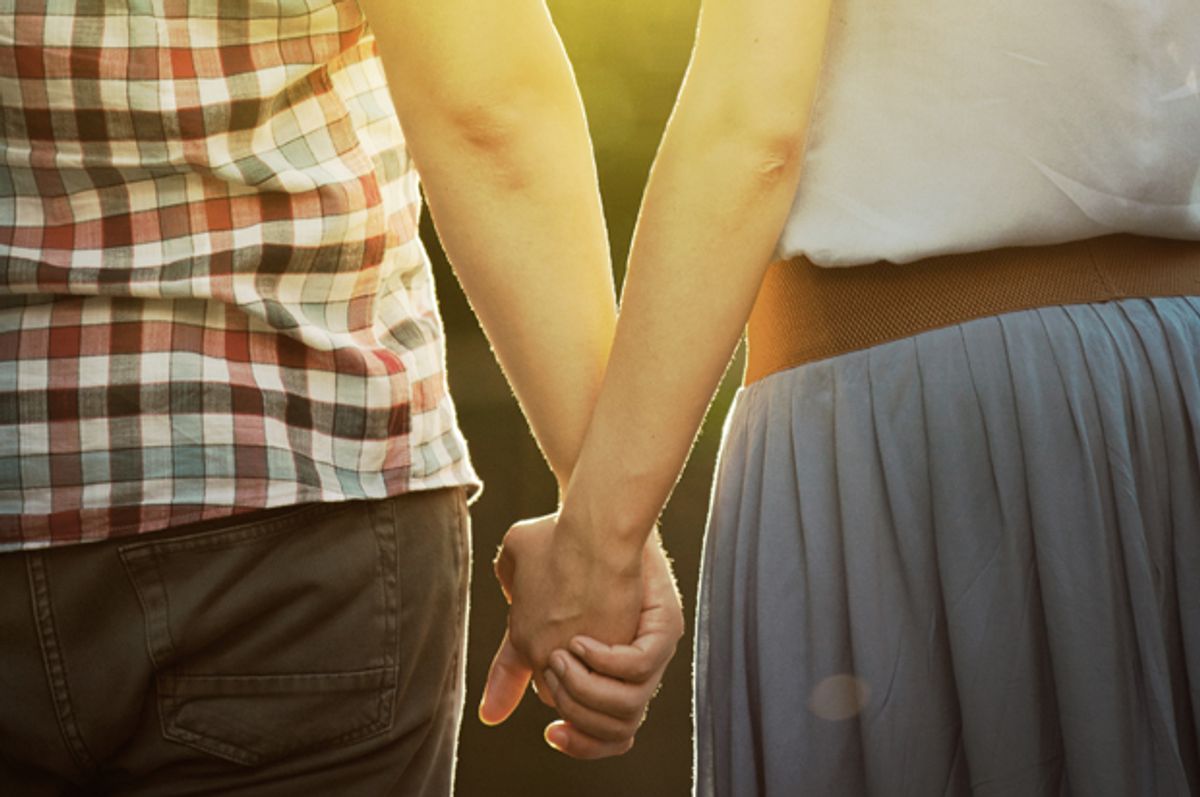 On the surface, the question seems simple enough: “Are you sexually attracted to your wife?” That’s what I asked 34-year-old Joshua Weed during a phone call. He breathed in deep. “That’s a really difficult question,” he said. “It’s hard to say that with clarity.” Weed is sexually attracted to men, but he’s married to a woman. “I love her very much and we do have a very good sex life,” he said. “I think she’s beautiful.” But he adds: “I’m gay.”

Weed’s wife, Laurel, is well aware of his sexual orientation. They grew up together in Utah and she was the very first friend he told about his sexual attraction to other boys. For a while, he considered the possibility of a relationship with another man, but he ultimately decided to pursue relationships with women, despite his lack of sexual attraction to them. Weed is a practicing Mormon and the Church’s current stance on the topic of homosexuality can be summed up like so: “The attraction itself is not a sin, but acting on it is.” While Weed says he does not pass judgment on gay relationships in general, when it came to his own life, he says, “I didn’t feel it was right.” So, he married his best friend.

There’s a term for this kind of relationship: It’s “mixed-orientation marriage.” Sometimes, the men in these scenarios are referred to as “same-sex attracted men married to women.” It’s a demographic that recently came to public attention with an amicus brief filed in opposition of marriage equality by a group that described itself as “same-sex attracted men and their wives.” The petitioners argued that “man-woman marriage laws” are not discriminatory, because, look at them! They managed to marry straight, despite their same-sex attraction. The petitioners added that same-sex marriage would necessarily insult their own marital arrangements, because it would send “a harmful message that it is impossible, unnatural, and dangerous for the same-sex attracted to marry members of the opposite sex,” says the brief.

Note that we’re not talking about so-called ex-gays. In fact, the term “same-sex attracted,” or SSA, has taken off as the notion of “ex-gays” has fallen out of favor. There are some key differences between the two groups: “Ex-gays” believe that they have successfully “cured” themselves of homosexuality. Self-identified SSA men in heterosexual marriages generally accept the reality of their same-sex attractions but have chosen to get hitched to a woman. “Ex-gays” have a rightful reputation for being bigoted, whereas SSAs are not necessarily opposed to homosexuality. I’ll give you a moment to digest all of that, because it gets much more complicated from here. As Warren Throckmorton, a psychology professor who has studied this group, told me, “They're not all the same,” he said. “It is hard to keep it straight.” Ehem.

When Throckmorton surveyed SSA men in relationships with women, he found that the largest sub-group were bisexual. “These were the men who viewed themselves as attracted to women in general and men in general, to varying degrees,” he said. “There was a general attraction to people.”

The third-largest group consisted of same-sex attracted men who experienced sexual attraction to a single woman. “One guy described it to me as, ‘She literally is the only girl for me,’” says Throckmorton. “He didn't think it would ever happen, he had resigned himself to being gay. He prayed and prayed and prayed and nothing happened -- and then he met this girl and they got to be friends, they got to be really good friends.” Even more than friends: “Eventually something changed and he found himself being attracted to her,” he says. “They have a whole complete sex life. He fantasizes about her sexually. But he still fantasizes about men too.” He doesn’t fantasize about other women, because his wife is the only woman in the world to whom he is sexually attracted.

All of which is to say: Taken together, SSAs are an incredibly broad group. If a partner in a heterosexual relationship rates as anything other than 0 on the 7-point Kinsey scale, you arguably have yourself a mixed-orientation marriage. (Note that Kinsey’s “Sexual Behavior in the Human Male” found that only 10 percent of men were "more or less exclusively homosexual.”) So, what marriage is not at least to some small degree mixed-orientation? But where things get really interesting are relationships like Weed's in which one partner is predominantly attracted to the same sex and yet is married to a member of the opposite sex.

Religion is often a strong motivator for these couples. Throckmorton, an evangelical Christian, developed a framework for counseling people whose sexuality is in conflict with their religious beliefs. Although he once supported conversion therapy, about a decade ago he came out against it and does not believe that gay people can be made straight. His therapeutic framework emphasizes that both sexuality and moral beliefs are “important aspects of personality,” and that “the therapist should not attempt to persuade clients about how to value these dimensions but can assist clients to determine their own valuations.” This can mean that a client decides to embrace a gay identity over their religious identity. It can also mean that they choose their religious identity over their sexual desires. Or they might adapt their religious beliefs to allow for the expression of their sexuality. In 2009, the American Psychological Association came out in support of this approach, noting that it can be beneficial for some clients.

I mentioned earlier that SSAs are not necessarily anti-gay. But there are plenty of SSA men who believe that homosexual behaviors are a religious sin -- and, as the recent amicus brief shows, some are willing to go so far as to politicize their identity in order to fight equal rights for gays. So it's no surprise that religious institutions are increasingly embracing the SSA concept. The Mormon church has begun promoting the idea that it’s possible for same-sex attracted men and women to either enter into heterosexual marriage, despite their attractions, or live a fulfilling life of celibacy. There was even a recent TLC documentary, "My Husband's Not Gay," about Mormon households in Utah composed of same-sex attracted men married to women. A recent Catholic documentary called “The Third Way” promotes the same choice.

But religion isn’t the only motivator here. “Some men I've talked to over the years, and some women too, just prefer a more traditional life,” says Throckmorton. “They just felt it would be more of what they'd always hoped for when they were growing up. They thought it would be easier to get along in society in general, even with the tolerance that exists now.” So they choose a life partner of the opposite sex, while acknowledging that it wholly contradicts their sexual orientation.

This does not sit well with a sex-positive liberal like myself who dreams of sexual freedom and fulfillment for everyone. But Throckmorton urges open-mindedness. "If we're really going to be tolerant and non-judgmental, that's what they want to do," he says. "In some ways, a very religious, exclusively gay man married to an asexual woman, they can have a very nice friendship, a very wonderful relationship in many ways, and it wouldn't be a family therapist's dream, but it would be fine for them." Indeed, it seems fine for Weed: He emphasizes the joy he gets from his friendship with his wife and the three daughters that they've had together. Weed, who has never had sex with a man, insists that his sex life with his wife is fulfilling: “Sexuality, I contend, is a lot about intimacy and vulnerability and connection between two human souls and not just about that carnal heat,” he explains.

That said, they do miss that carnal heat. “We both acknowledge that while our sex life and romantic life and emotional life is really, really good, we both at the same time acknowledge it’s missing a component, and sometimes that’s really sad,” he said. “Sometimes we grieve that and wish it could be a different way.”