"Mad Men" recap: "Why don’t you just write down all of your dreams so I can s**t on them?"

Don faces the wide-open future, Joan is swept off her feet, and Sally is not happy with her parents 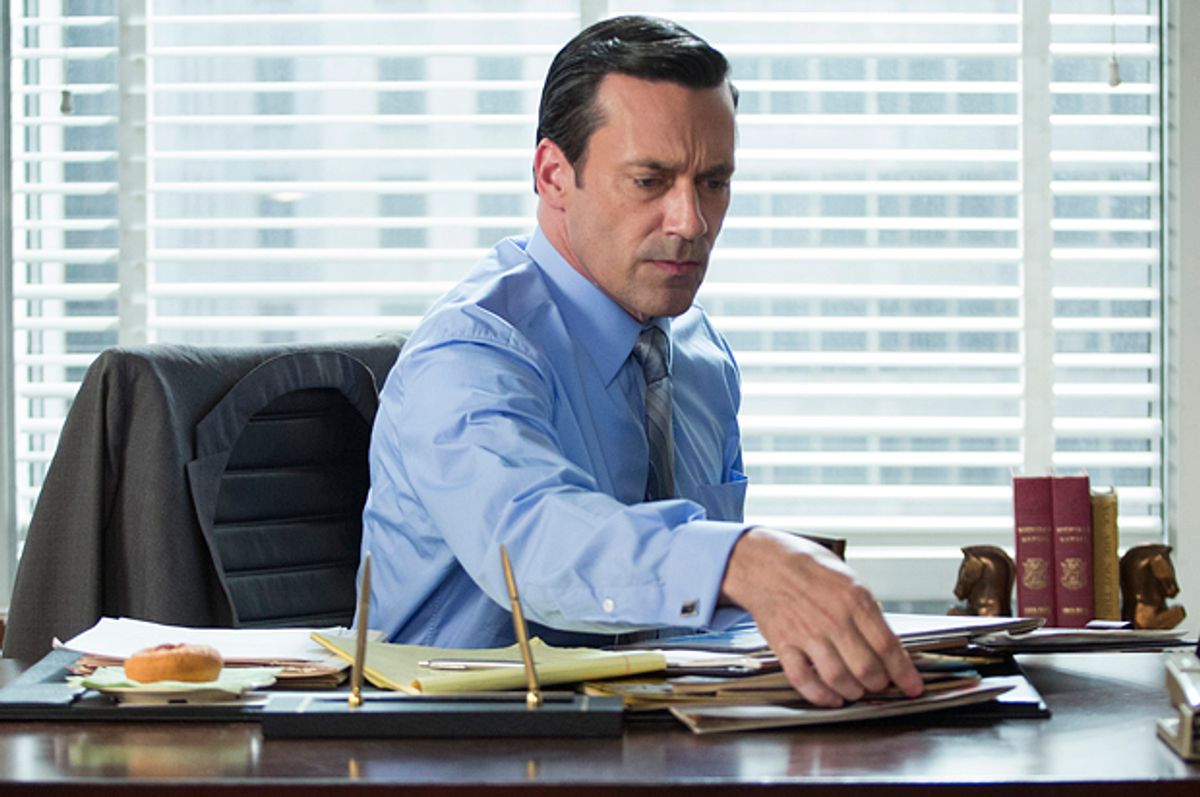 Hey, did you know Don Draper’s apartment is a metaphor?

It’s almost comical, how hard “Mad Men” is doubling down on the symbolism of Don’s Upper East Side penthouse. It’s expensive, but there’s nothing in it! The carpet is stained with wine! He just sleeps there! The apartment is Don Draper’s brain, or to be more exact, his persona: Gussied up, lacquered over, waiting for someone to come in and give it personality, but no one ever will, because there’s no reason anyone would ever come inside, because there isn’t even anywhere to sit down.

That’s the substance of numerous mini-monologues directed at Don in tonight’s episode, “The Forecast”—an episode where people tell him he’s pathetic, and he doesn’t really argue. First it’s the realtor, Melanie (Rachel Cannon), who informs him that his apartment is that of a sad man, an “$85,000 fixer-upper” that is too expensive and useless to be any good to anyone. That’s followed by Mathis' (Trevor Einhorn) tirade, following a pep talk gone wrong: “You don’t have any character! You’re just handsome! You’re full of yourself!” And lastly—most importantly—his daughter, Sally, who accuses him of being unable to stop himself from flirting with her 17-year-old friend Sarah (Madison McLaughlin). “You can’t control yourself, can you? … Anyone pays attention to you—and they always do—you just ooze all over them.”

Don responds with one of the most self-aware sentiments he’s delivered in this entire show, spanning its seven seasons. “You’re very beautiful. It’s up to you to be more than that.” It’s an observation he seems to have come to just throughout the day—the morning started with his realtor yelling at him, and the day ends, as he arrives home, with his realtor telling him his apartment is no longer home—and in the middle, Don Draper’s day is an exercise in performing emptiness. It features some lovely cutting lines from Peggy ("This is supposed to be about my job, not the meaning of life. Why don't you tell me all of your dreams so I can shit on them?") and a lot of Don dictating nonsense to Meredith, but the result feels a little on-the-nose. You mean to say Don Draper is struggling to understand his future, because he doesn't understand the meaning of his existence? Color me shocked.

I don’t know if I loved “The Forecast”; to be exact, the more I think about it, the less I like it. There are moments in it that are lovely, and it’s far more coherent than last week’s “New Business.” But it’s not saying that much that is new, that the show has not already said a few dozen times. We have seen Don and Betty both enter the ritual of sexual congress with people they really shouldn’t, because that’s the only way they know how to relate to other people; their stories are rigorously, carefully paralleled in this episode, as Betty continues to offer Glen (Marten Holden Weiner) a smorgasbord of mixed signals and Don lights the cigarette of a 17-year-old girl that is his daughter’s high-school classmate. It’s a story about the irrelevancy of the desires of the middle-aged in the face of the perpetual abundance of teenagers, perhaps, or the inability of Don and Betty to truly grow up, rapt as they are by the attention of pretty boys/girls and their own sad fantasies about themselves.

But what it is, above all, is sort of obvious—the scenes between Betty and Glen, in particular, might as well have had claxons flashing overhead as air-raid sirens blared from the rooftops. Mayday, mayday, super-Freudian sex may occur! Hide under your desks and await further instructions.

The subtext of Vietnam underwriting Glen’s story was particularly strange. The war is this very real thing happening in the background, and most of the time, our characters are isolated from the proceedings by a bubble of class privilege. Glen’s reasons for enlisting are amorphous at best, and mostly pinned on wanting to sleep with Betty. It almost works, which is sad for everyone involved—January Jones plays Betty’s ruffled arousal at 18-year-old Glen’s arrival with wonderful, slimy self-consciousness. But it’s a weird narrative detour that tries to say something about proving masculinity, war, Betty’s libido, and desperation, I guess, that doesn’t quite land right. Betty throws away little Bobby’s toy machine gun at the end of the episode, and that somehow made the whole story feel even more fake. This is a woman who took to her backyard with a gun, remember? She’s not afraid of a toy gun. She’s hawkish. If there’s anything she’s afraid of, it’s her own desire, but somehow, the episode buries that narrative thread. (I would have been more satisfied, story-wise, if Glen had gotten a little farther with Betty. At least something would have happened.) As it is, “The Forecast” presents a neutered, maternal Betty, both smothering and smothered, and a view of the Vietnam War so perfunctory it cannot but do a disservice to it. It’s not a good look.

I will say that there’s something nicely referential about Glen going to war to impress Betty. Glen is not really Don Draper 2.0, but the stage is set for him to come back changed and broken—if he comes back at all, of course. Dick Whitman went to war to escape his smothering stepmother and came back Don Draper, married man. Glen Bishop, like everyone else less handsome than Don, may not have such good luck. Betty will have ended up killing a boy, by accident, because she didn’t know how to not be an object of male desire in the crucial, necessary moments. Femme fatale, indeed.

I never thought about the show this way before, but “Mad Men” is sort of the story of the popular kids in high school—the ones who were incredibly beautiful, or effortlessly popular, or came from the money and/or class that made it easier to accomplish everything. Don is a handsome man, but he’s also a role in a TV show, and when we watch TV, we expect the actors to be striking, because they’re actors! Yet here on “Mad Men” the attractiveness of the actors becomes the unfair beauty of the characters, and so many of the people in this show are trying to be something more than their pretty exteriors. It’s a privileged problem to have, as Mathis observes, but it’s an intriguing one, all the same—these beautiful people end up having all the money and power in the world, whether they’re politicians or celebrities or just the most influential parent at the PTA meeting. We might as well try to see what makes them tick.

And in the case of Joan Harris, her beauty is used against her so often that she is forced to struggle against it. In the early seasons of this show, Joan embraced her attractive power, while other characters, like Peggy, seethed; enough has changed that now Peggy seems able to let it go while Joan simmers with rage. Joan is one of the best creations of “Mad Men,” and one with never enough screen time; she is a woman made to bear almost every burden of being female in this world, and one that scrapes her way to partnership despite all of that. In “The Forecast” she starts up an already tumultuous affair with a sharp-eyed silver fox named Richard (Bruce Greenwood) who is, apparently, sticking around for a bit. As handsome and charismatic as he is, though, he, too, might be a bit empty inside: He legit freaks out when Joan tells him she has a son, and has some version of a tantrum when she tells him she has to leave by midnight. Joan’s always been attracted to real assholes—Greg, Roger, even Pete Campbell, a few times—so her tolerance of Richard is not wholly surprising. His weirdly uneven moods toward her—his shifting ideas of what he wants his future to be like—make him less of a character and more of a cipher, a placeholder for some other unfolding. I’m not so sure about him. But the story, featuring fantastic work from Christina Hendricks, was to my mind the most compelling of the evening. Don’s almost exclusively a metaphor at this point, and Peggy and Pete are quarreling over a cookie account. But Joan remains flesh and blood, a recognizable person with real problems.

Naturally, aside from Joan, “The Forecast” shines with Sally Draper, who is the show’s light and joy at this point—hope for the future, embodied in one stubborn teenager. She has some excellent, sly lines in this episode, and manages to draw from Don the point of the whole episode (and maybe his entire life). Just her being back is enough to make me happy with this week’s “Mad Men,” even if I find myself still impatiently waiting to see how all this turns from symbol to substance.