"Sorrow everywhere with nowhere to go": Elizabeth Alexander on losing her husband and writing through grief

"The Light of the World" is the new memoir by Alexander, the poet who read at Obama's 2008 inauguration ceremony 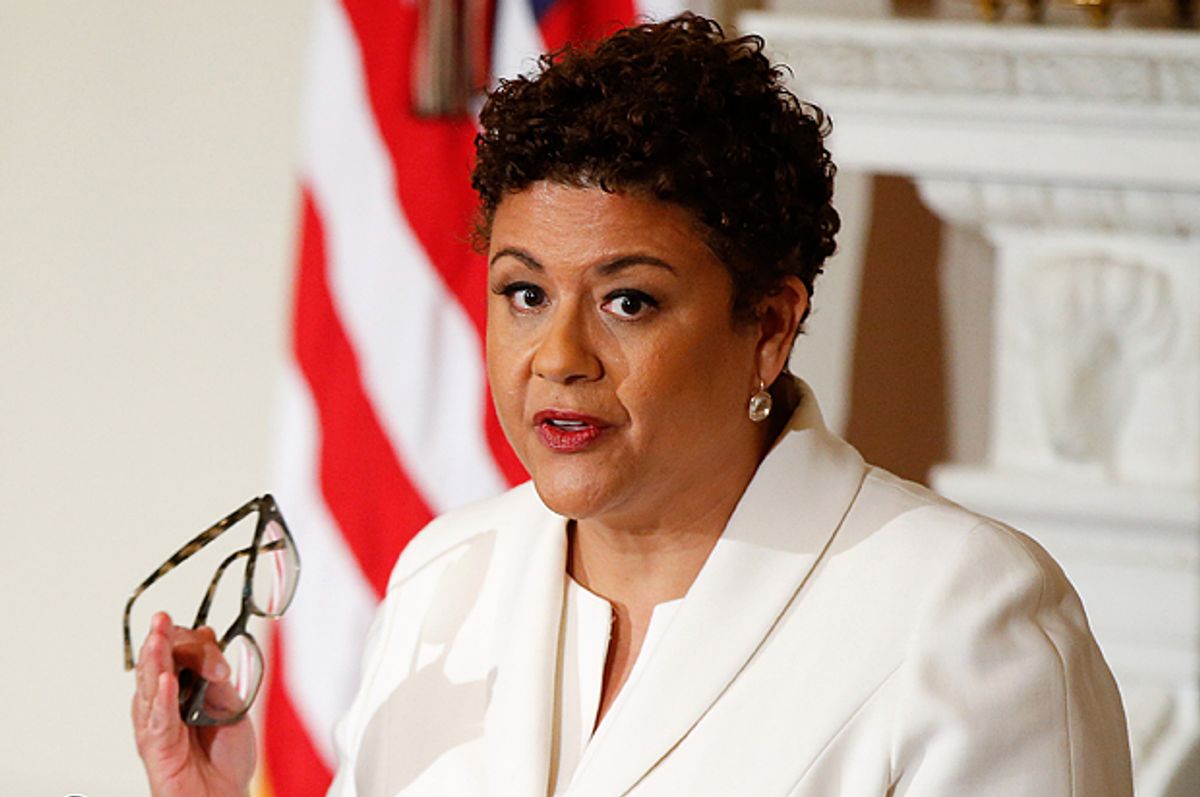 Elizabeth Alexander lost her husband quite suddenly right after he turned 50. Ficre Ghebreyesus’ heart failed him, but it lives on in the pages of her memoir, "The Light of the World." The poet writes her way into and around grief, using the tool she knows best to make sense of it all: words. Alexander’s husband was an artist, and it’s easy to see how the two fell in love: a shared sense of creativity and wonder.

I first met Alexander two months ago in the grand lobby of a stunning hotel in Asheville, North Carolina, during Winter Institute, a conference for booksellers sponsored by the American Booksellers Association. She has a confident and calming presence, and I could have chatted with her in front of the fire for hours. Alexander was there to meet with booksellers and sign advance reading copies of her book. Recently, I had the opportunity to interview her over the phone, and I was struck by her grace and wisdom after experiencing such a tragic loss.

Poetry is a big part of this book since you are a poet and you quote other poets and even include a poem written by your husband. And I’m wondering why you decided to write a memoir about your loss, and how it was different from writing poems?

You know, I didn’t set out to write a memoir. I was really surprised that I was writing a memoir…but what I found when I was writing my way through my grief is that I would write these little intense snippets of language that were not poems, but they felt like they came from the same place that poetry comes from for me, which is to say language-driven. Not necessarily solely about content or narrative, but more something emerging from the experience in language. And I just kept writing those things. And I realized that then taken together, they formed a larger whole. So it was a poet working as she knew how to work and finding that what it added up to was the draft of a memoir that I was then able to shape.

The book is written in short chapters. Is that the poet in you capturing your feelings and the narrative in as precise of a way as possible?

Yes. That’s what we do when we write poetry.

You know, it’s all about precision. It’s all about, even in long poems some of which I’ve written, it’s all about condensation and exactitude. It’s also all about the elliptical, which is to say sometimes you can cover a lot of space and a lot of time in a few words in a poem. And I like the idea of that. I didn’t feel this was a book that needed to walk you through time conventionally. I didn’t experience, nor do I think any of us experience the time of grief conventionally. It’s a very, very serial time.

At one point you say, “How much space for remembering is there in a day? How much should there be? I think about this in my poetry. I don’t want to be a nostalgist. Yet I feed on memory, I need it to make poems, the art that is made of the stuff I have: my life and the world around me.” So how does writing help you construct and make sense of your own memories?

So I think that then going through such an extreme of both grief but also shock, you know, we lose people in all kinds of different ways and so one factor that was part of ours was the shock of it. And so I was very interested to find that the way I really knew how I felt, and not just how I felt like I feel happy, I feel sad, but what was happening was to write it down. And that the process of writing is a process of living.

And when you were working on this book, did you write it with an audience in mind? Or did you feel very protective about sharing these feelings with the entire world?

I feel protective. I can’t believe that’s what’s about to happen, although – and I’m answering your question backwards – what’s been incredibly heartening and kind of stunning to me from people who have read advanced copies of the book or people who read the excerpt that was in the New Yorker and the literally hundreds of emails I’ve received is that people feel like they knew him or people have a pointed connection that isn’t necessarily about “I lost a spouse” or “We have the same culture” or “I’m a parent too,” but just about living and feeling and loving and losing and continuing to live.

So any trepidation I would feel, I feel like I can’t have it anymore, because the book is connecting with other human souls. And that’s just amazing, and that feels so much bigger than me. And that feels to me like why we need art. And that reminds me that when you make a work of art and you set it out into the world, yes, it’s yours. Yes, I wrote it. But it’s also a free-walking being now.

Ficre was an artist and you talk about that a lot in the book, and about his style. And in one particular passage you write: “Ficre did not paint what he saw. He saw in his mind, and then he painted, and then he found the flowers that were what he painted. He painted what he wanted to continue to see. He painted how he wanted the world to look. He painted to fix something in place. And so I write to fix him in place, to pass time in his company, to make sure I remember, even though I know I will never forget.” I thought that was a beautiful way to talk about the common human instinct to hold on to our loved ones. I’m wondering how you wrote about someone that you knew so well and that you loved so much without idealizing them. How do you write from an honest place about a person who means so much to you?

Yeah, that’s a challenge, isn’t it? The quick answer is, I don’t know. I just did it. It’s mysterious. But I think also one thing I was aware of, and this is to the word "nostalgia," I knew I had to write this book quickly…I had to write it when I was still in it. Because I thought if I’m too far away I would forget things. But I think it’s not about forgetting things. I thought I might idealize things. And so I wanted to be able to just be in such raw feeling and experience that I almost didn’t know what I was writing. I was just writing. And I just really, really was clear that I was kind of racing against the clock, because of course you never stop missing the person. You never stop breathing. But you do pull yourself together and keep on.

I’ve often heard that you should wait to process things that you have gone through before you write about them. But I love that you’re saying you wanted to process them in the actual moment. So I’m wondering, do you think the writing would’ve been different if you waited years to write about this?

Oh, I’m sure it would be…I can certainly imagine writing about Ficre if I’m lucky enough to have a long life and a long writing life, and it’ll be interesting to see what shifts and changes. But, you know, I just knew that I wanted it to be a physical experience when I was writing about it because I think that’s one thing that changes a little bit too.

There’s a beautiful passage about sorrow in the book: “Sorrow like taper, sorrow like smoke, sorrow like quicksand, sorrow like an ocean, sorrow louder and fuller than the church songs, sorrow everywhere with nowhere to go.” I’m wondering, do you see sorrow as something that is always shifting shapes? Or is it everywhere at once?

I think I would reply by saying a kind of phrase that I hear a lot, and that maybe I’ve been hearing more in the past couple of years because now I’m attuned to it, that you never know what sorrow people are carrying around. Everybody has some sorrow that they carry with them, which I think is really, really true. And I think that’s why you ought to just be a kind person because you just don’t know where you’re encountering somebody in their own life. And sometimes incidents that feel like hostility or conflict could sometimes be made a little better with just holding back for a moment and remembering that you don’t know what happened before you got there…

If we’re evolving in life I think that the difficult things that happen to us…I don’t think they necessarily get better in a straight line, just climbing the steps one at a time straight up and then you’re better. But I do think that it changes depending on the circumstance, depending on who you’re intersecting with, you know? Because sometimes when you share a sorrow with somebody else that can be sometimes seemingly more painful and more intense but ultimately very, very beautiful and powerful.

You’ve called Ficre the “ghost of all book stores.” He was a voracious reader and eager to pass that on to his sons as well. Do you see this book as capturing his ghost between the pages? Keeping him alive in the pages of this book?

It’s just amazing to me in some of the responses I’ve received. I mean it just makes me quite emotional to think about it, that people who didn’t even know him mourn his loss. I don’t even know what to say about that except that it just blows me away. So I think that in the way that for me art and literature are just as real as people, you know . . . I think, you know, characters from literature . . . I mean the great ones, great works of art, they are known deeply to me. And so that is a kind of aliveness. It’s a very poignant kind of aliveness because of course the person is not here, but what I also believe is that though he does not walk among us anymore, all that he gave us is fully alive.