The career assassination of Cornel West: A messy intellectual divorce reveals layers of broken heart -- and to what end? 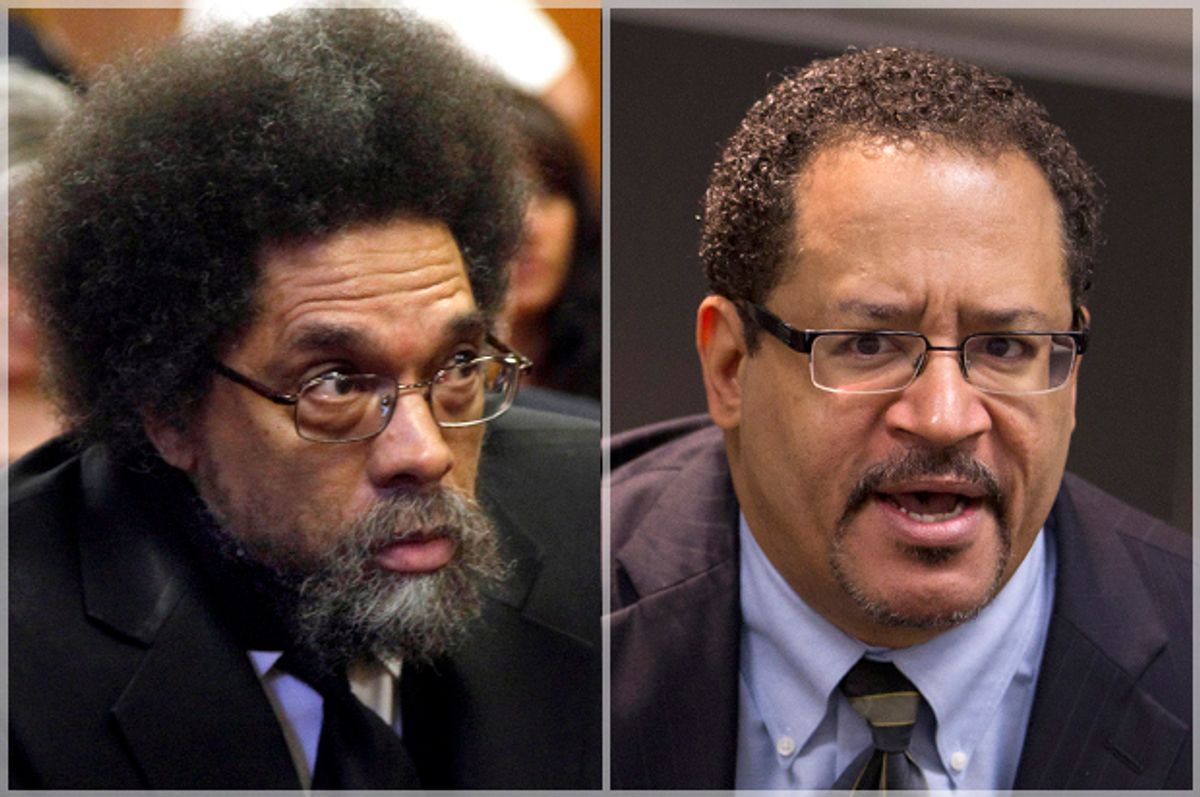 Independent of one’s stance on the rift between Michael Eric Dyson and Cornel West — a rift years in the making and now clearly delineated in the form of Dyson’s essay on West in the New Republic, "The Ghost of Cornel West" — this has all the hallmarks of a messy divorce between two public, black intellectuals who were, perhaps, better served keeping things offline. Maybe try to squash their beef in the privacy of an on-campus office or in a cozy, warm living room with beer or tea shared. Rather, what we have is this: the proverbial tea spilt online, on social media, and I keep asking myself, “Why now? And to what end?”

The essay in question, a veritable bomb lobbed online this past Sunday amid the "Game of Thrones" and "Mad Men" tweets, makes no attempts to hide its intent: The title itself, “The Ghost of Cornel West,” suggests that West, an intellectual powerhouse and elder to many young policymakers, thinkers and writers, is not only in the twilight of his career, but has already passed away, reduced to walking carrion with his relevance trapped squarely in the past. A relic to be remembered and lamented and examined with the white heat of a spotlight meant to sear whatever living, breathing pieces remain of West’s legacy. Dyson — whom West mentored for more than 30 years — wields his pen with career assassination in mind, looking to finish off the man who, once upon a time, Dyson considered to be his friend and, perhaps, much more.

As I said, the very title of the essay foretold ill intent, but before reading it, I had my doubts — or hopes, maybe. I knew in passing of the connection between Dyson and West, and I knew there was a falling out between the two, centered around the rise and eventual inauguration of President Barack Obama. Still, I had my hopes. Maybe the essay—harsh title notwithstanding—would be an open letter of love to Cornel West, last seen being hauled off to a jail cell in Ferguson, Missouri, this past fall. “It could be a plea,” I thought, “for the power and penetrating rhetoric, buoyed by a once-in-a-generation intellect, to return now, now, when we, black Americans, and the nation in whole, need it the most.”

Still, I couldn’t shake the title. “The Ghost of Cornel West” dredged up dread; it evoked the image of dead bodies piling up at the hands of police; it brought to mind the fear that another black life can be easily cast aside; it reminded me of the hashtagged names of black men and women killed by senseless violence, their very names uttered in veneration as an antithesis to the media-dragging these victims receive, with police records and criminal proceedings placed on display for judgment.

My hopes waned—then scattered completely—as the essay opened with a YouTube video of Cornel West speaking on his issues concerning President Obama’s use of Martin Luther King’s Bible for his second inauguration. The video, which appears later on the actual webpage containing the essay, showed up first, before the text, when I saved the article to my Pocket app. I had no intentions of reading the essay Sunday night. I wanted to save it for another time. I knew I had to read it, but I didn’t want to. I wished it didn’t exist at all.

I have no personal stake in this breakup, for lack of a better word. I don’t claim to be a “public intellectual” and any rhapsodizing I do is rare, and often confined to my Twitter timeline, and any vitriol is stepped on by snark. In other words, I offer opinions when I have one to share, and in this case I have some thoughts, but I need to make something clear before we continue. To put it colloquially, I neither ride nor die for Dyson or West. I’m familiar with their work, but not deeply entrenched. I have watched both of them deliver stunning, poignant ideas, as well as ridiculous and tired truisms, on many panels aired primarily on C-SPAN or BET back in the late 1990s and early 2000s. My thoughts on race, on politics, on pop culture, and my place within this world in general, all have been influenced, albeit partly, by West and Dyson, both. In that sense, watching all of this unfold is like watching two senior family members—more distant cousins to me than uncles, maybe—attempt to wound each other. And while blades are brandished and blood is shed, I’m still left asking, “Why now? And to what end?”

“To what end?” seems clearer, or maybe easier to pinpoint. There are layers to Dyson’s essay; to pull them back reveals not so much the flaws and failures of the essay’s subject, but rather the pain and betrayal felt by the essayist himself. Dyson shows his hand, but first tries to hide it with fair, if uncomfortable, criticisms of West from a scholarly point of view. “[West] hasn’t published without aid of a co-writer a single scholarly book since Keeping Faith,” Dyson writes, “which appeared in 1993, the same year as Race Matters. West has repeatedly tried to recapture the glory of that slim classic by imitating the 1960s-era rhythm and blues singers he loves so much: Make another song that sounds just like the one that topped the charts. In 2004, West published Democracy Matters, an obvious recycling of both the title and themes of his work a decade earlier. It was his biggest seller since Race Matters.”

Dyson continues to dissect West’s output, more oratory than written at this point in his career, and raises salient points regarding the “ecstasies of the spoken word, when scholarship is at stake, leave the deep reader and the long listener hungry for more.” Dyson continues, “Writing is an often-painful task that can feel like the death of one’s past. Equally discomfiting is seeing one’s present commitments to truths crumble once one begins to tap away at the keyboard or scar the page with ink.”

And while these points are fair and worthy of further discussion, Dyson—the hurt, perhaps rightfully so, and jilted pupil of West—drives the narrative toward the petty. Accusing West of “highly staged and camera-ready gestures of civil disobedience, such as in Ferguson last fall,” Dyson goes further, writing, “West likewise hungers for the studio, and conspicuously so. There he is on CNN, extolling his prophetic pedigree. There he is on MSNBC, discussing his arrest in Ferguson while footage of the event rolls. There he is in the recording booth making not spoken word or hip-hop, but a grimly earnest sonic hybrid of speech and music […] There he is in The Matrix sequels, doing something he’s become tragicomically good at—playing an unintentional caricature of his identity.”

In all, the essay—north of 9,000 words long—is a grueling, disquieting tome so dedicated to the annihilation of West, one can see the splashes of tears that presumably fell from Dyson’s eyes. In my experience, hate does not generate this kind of deadly prose; hateful text tends to expose the author’s ignorance and no matter how anyone feels about Dyson, before and after this publication, he appears to be anything but ignorant. Rather, this is an angry exposé powered by love, and there is no doubt in my mind that a broken heart fueled this essay, part-takedown, part-memoir.

That love is why, more than anything else, I wish that this was handled privately, delicately and with some modicum of grace. For all I know, there were words exchanged between the two: Dyson might’ve sent the essay to West, or West said a word or two that forced Dyson’s hands. I don’t know. I know that two highly publicized members of the black intelligentsia have severed ties and, whether they know it or not, placed the younger generation—my generation—in an awkward position. People are choosing sides, or choosing to abstain (a side all the same), and the divisiveness in the current climate, when Black Lives Matter needs to remain in the public eye, is unfortunate, and possibly the real casualty. Still, what's done is done. Dyson’s essay is the kind that can never be walked back, and he knew that going into the endeavor. Still—why now?