"Veep" punching bag Jonah on his new gig: "It's so close to perfect for him, aside from the fact that he's being molested" 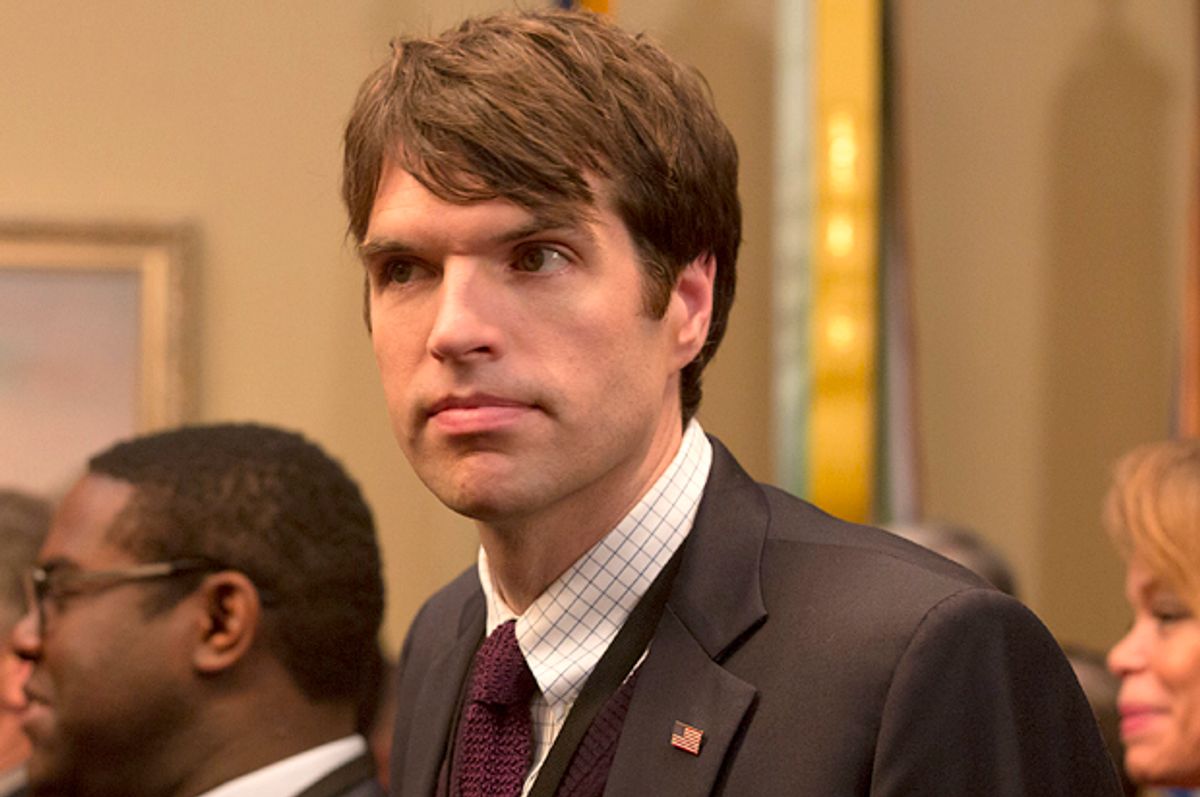 Resident "West Wing" punching bag Jonah Ryan is moving up in the world. At the start of season 4, having garnered a new job with the Vice President’s office, Jonah is exactly where he wants to be: In spitting distance (literally) from Selina and the gang at the Oval Office. There’s only one problem: His boss, Teddy (the Veep's Chief of Staff, played by Patton Oswalt) won’t stop, um, fondling his balls. We caught up with Simons via phone to talk about Jonah's arc, workplace sexual harassment, and why we shouldn't feel too bad for Jonah. As Simons puts it: "He's the kind of person that will never see the connection between Teddy's behavior towards him and his behavior in the office. He does not see that one-to-one ratio of the awful workplace sexual harassment that he puts out there and how it compares to what Teddy is doing."

I want to talk about the scenes with Patton Oswalt, where his character Teddy is sexually harassing you. How do you keep a straight face during those ball-tapping scenes?

You know, those are a little bit easier to keep a straight face during because it's a really invasive action, whether or not it's a rehearsed and scripted thing. It's a really, weird invasive thing to have somebody grab and touch your genitals so no matter what, it's very easy to keep a straight face during that. But yeah, it's so ridiculous. The tapping is just... And the way that Patton does it, it's sort of power move but there's also some gratification behind it. It's almost like this is how we say hello and goodbye now. Really, you have no idea what it's based in, so I just love the way he plays that. It's so ridiculous and so funny.

So it's as uncomfortable to shoot as it is for us to watch?

Patton and I have known each other for a little bit, we've had opportunities to meet because we live in the name neighborhood in LA; we've bumped into each other and talked before, so we were pretty comfortable with one another going into it. I would say it's almost always a little bit more awkward to shoot than it is to watch, though, just because you're at work and you have to navigate the touching of someone else's genitals in the workplace. It's always going to be weird, doesn't matter what it is. You see behind-the-scenes outtakes of sex scenes and it's just awful; it's two uncomfortable naked people having sweat sprayed onto them, you know?

What do you think is going through Jonah's head in those moments?

At the end of the episode, you get your own assistant, which sort of flips the power dynamic as Jonah finally gets to boss someone else around. How do you think the character is dealing with having an underling?

I spend a lot of the season working opposite [Sam Richardson] — he plays Richard Splett — and he's just one of the funniest people I have ever met, and so effortless with how funny he is that all those scenes were super fun to shoot. I think there is something that's really fun about those scenes, that Jonah treats an assistant sort of as you think he would. The line gets very blurred between work assistant and personal assistant, and I think that Jonah probably has him run personal errands. Richard is just so positive and is so naive that he just goes with all of it, and I think there is a part of Jonah that understands that not a lot of people think he's very cool, so all the things that Richard does that might annoy Jonah— because Jonah is not a super positive dude about everything— no matter what, he'll turn it around because the people who think Jonah is cool are pretty few and far between.

Do you ever think about what Jonah's childhood was like?

Oh yeah. A lot of the things like that, all the backstory stuff we have is stuff we've been building since the very beginning, trying to justify why somebody like him would ever be able to keep their job. There's this backstory that is there that we have of him. I've always assumed that he was a very well-off kid; he was just a son of privilege and his parents did that thing, that dangerous thing where you tell your kid that they are great and smart and they can accomplish anything. In some cases it's just not true, but he truly believes that. He was told for too long that he was special and that he was the most special kid out there, so, unfortunately, he actually believed it.

Must be something there, yeah.

I personally find that the character has gotten increasingly likable, I guess because he's the perpetual underdog and he has a certain vulnerability to him. Was that an intentional move, to make him more sympathetic?

I don't necessarily know that there are efforts to make him more sympathetic. I think that in an effort to maintain the realistic power dynamics of that world as well as keeping it realistic as a comedy... it's just the nature of all the work that's being done when making it has lead to that idea of making sure that there is a human emotion underneath all of that. It makes you more sympathetic to people when you see that he's more than just an awful, terrible dude. That being said, I think as much as sympathy as I feel for him, I think they also counterbalance that. He will do something that will make you regret having that sympathy; they won't ever let him off the hook. He won't ever be this great dude that has these vulnerabilities; he has those but it's like, also, he did these five really awful things. Point being, he's the kind of person that will never see the connection between Teddy's behavior towards him and his behavior in the office. He does not see that one-to-one ratio of the awful workplace sexual harassment that he puts out there and how it compares to what Teddy is doing.

Every character on that show — partly in virtue of the actors who play them —  is likable, even though they are, for the most part, terrible people.

Even the ones that are seemingly the nice ones, ultimately, everyone ends up just being kind of a selfish person in whatever way. Mike McClintock is a really lovable character but he's selfish in that he just doesn't want to work hard; he's just lazy. Richard is selfish in that he's unwilling to see that there could be bad things that happen in the world; he's positive to a fault. Everybody has their own ends and they don't really give a shit about anybody else unless the possibility of giving a shit about somebody else gets them something.

How smart do you think Jonah is? How would he score on an IQ test?

[laughs] that's a good question. I think it would end up being in the high, above-average, but not crazy smart. Like, not Mensa. But I think he would be above average; there is that part of me that thinks that there are things he's good at. Even though he was a legacy kid at a lower Ivy League school, he probably got okay grades; he probably never did great but he more than makes up for it. He would be book-smart but just such a dummy when it comes to actually trying to talk to people.

Everyone loves the Jonah put-down scenes. Are there any memorable insults or yelling matches we can look forward to this season?

There absolutely will be, and ultimately there will probably be too many to count. We did the Paley panel last night and someone's always like, what's your favorite insult? It always ends up that the answers are the ones that are directed at Jonah. Other people get insulted on the show, but none so much as me. I can't think of anything just off the top of my head, but Selina, at one point, throws out a bunker metaphor that I think is one of the funnier things I've ever heard about and I'm really excited about saying.

I'm excited to see it!

I don't want to give away anything more than that, but I'm very excited about that one.