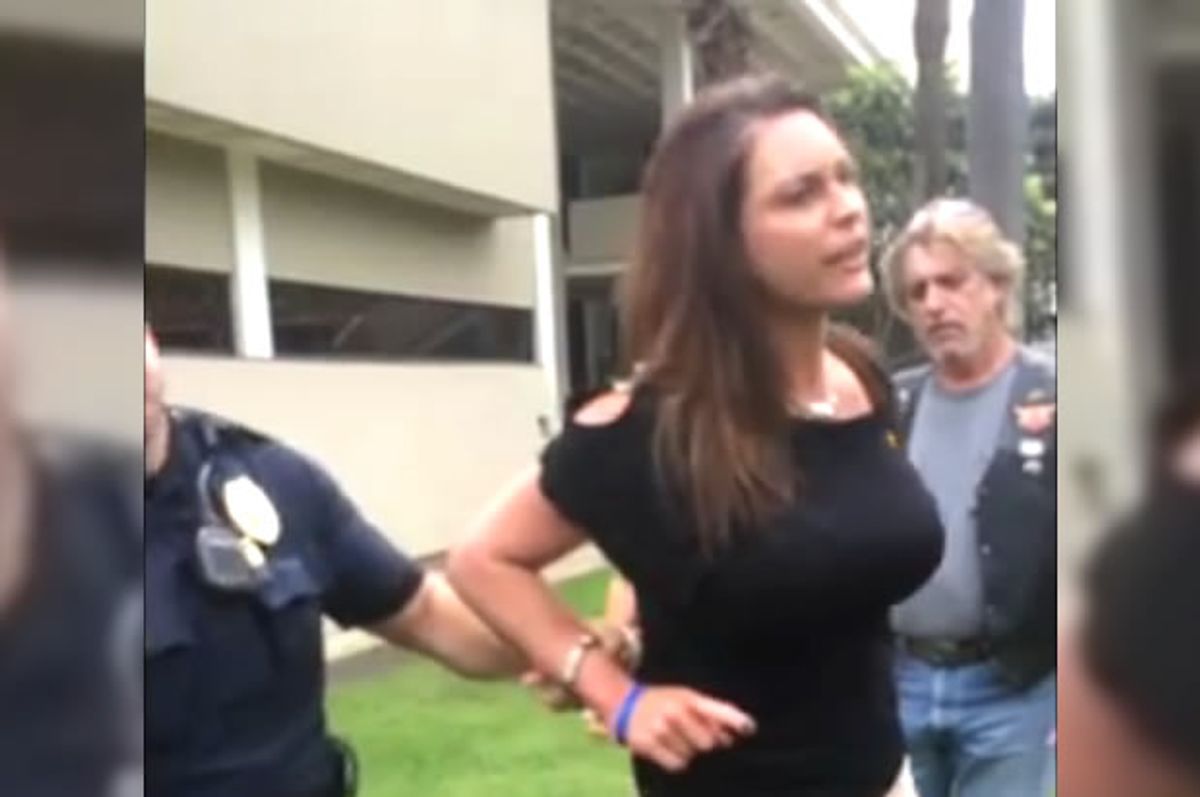 A former Air Force sergeant who left the military after posing naked with the American flag in Playboy in 2007 was arrested on Friday after she attempted to steal the flag of an African-American student group she believed was disrespecting it, the Washington Post's Michael E. Miller reports.

In a video recorded by her daughter, Michelle Manhart can be seen holding the flag as she encounters a student who demands she return it. "That's not yours," the student says.

"Actually it is," Manhart replies. "This flag belongs to the entire United States."

More students -- who say they were there protesting racism -- surround Manhart and attempt to secure the flag. As police get between them, Manhart tries to sprint away but is stopped by the gathering crowd. One of the protesters can be heard telling police that the fact that she hasn't been arrested yet is "white privilege."

"Is that not theft?" another asks. "If this had been in the ‘hood, you’d have had me in handcuffs already."

In a twist that visibly surprised Manhart herself, the officers demand that she return the flag. When she refuses, they move to detain her. "Why are you not touching her?" she asks, wondering why the officer was not detaining the lead female protester.

"You are disobeying our lawful command," the officer replies. "Let go of the flag." When she refuses yet again, all four officers pin her to the ground and handcuff her -- to the evident delight of the student protesters.

Manhart told the Valdosta Daily Times that she received a telephone call from a student who observed the protesters walking on the flag.

"I was just going over there to pick up the flag off the ground. I don’t know what their cause is, but I went to pick it up because it doesn’t deserve to be on the ground," she said.

In a telephone interview with Fox News commentator Todd Starnes, Manhart said that "the flag is an iconic symbol for freedom. If you are going to fight for a cause and use the First Amendment -- how are you going to stomp and trample the icon that gives you that right?"

Manhart also appeared nearly naked in an advertisement for People for the Ethical Treatment of Animals in 2008 -- she had a tiny American flag covering each of her breasts.

Watch the encounter below via Dustin Cossmanhart on YouTube.