What Lena Dunham and Meryl Streep have in common: 5 major stars making Hollywood a better place for women 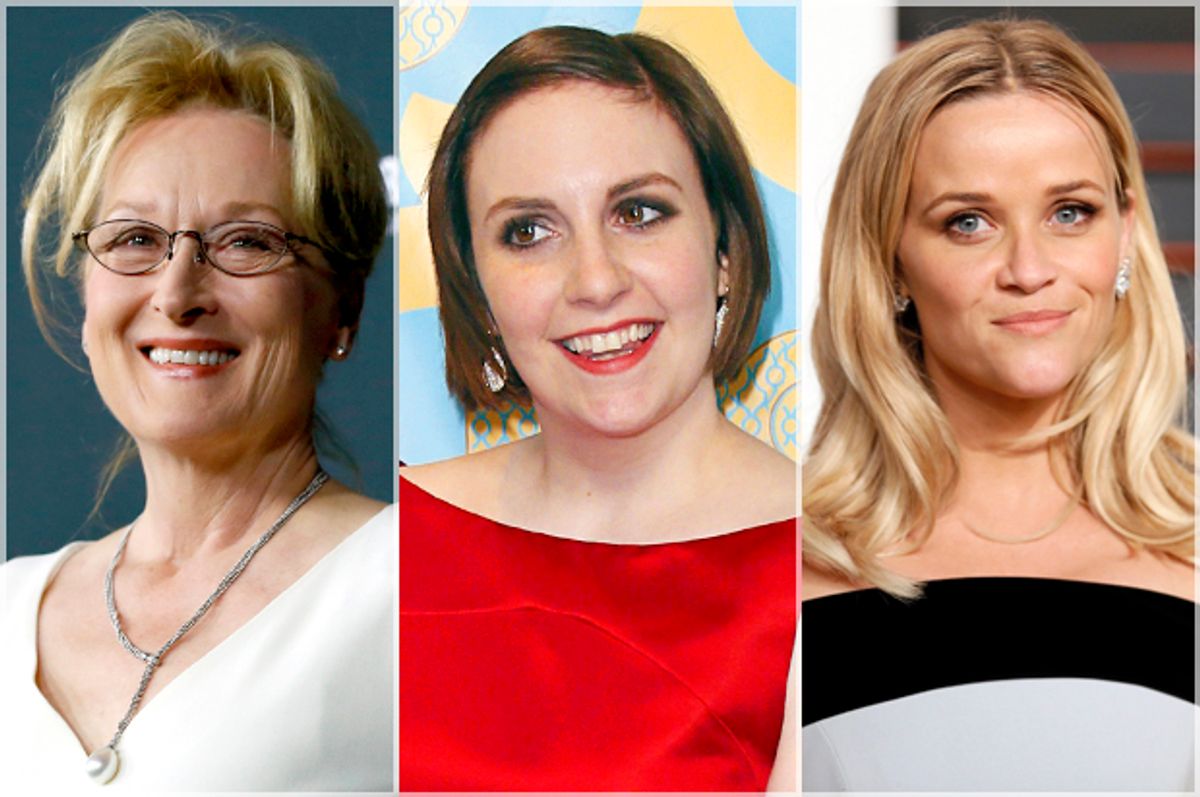 While Hollywood’s record on gender equality remains dismal, there are some reasons to be optimistic; namely, the many high-profile female trailblazers who are fighting to expand the presence of women on-screen and behind the scenes. Yet while many Hollywood actresses have been leading by example — from Jodie Foster and Angelina Jolie pivoting to the director’s chair, to Charlize Theron and Patricia Arquette boldly demanding wage equality -- there are some famous women who have gone a step further. Here's a look at five big-screen stars who are out on the front lines, founding organizations and funding projects that directly combat sexism in their industry.

Meryl Streep
According to the Center for the Study of Women in Television and Film, only 11 percent of the biggest films of the past 17 years have included women writers. This weekend at Tribeca, it was announced that Meryl Streep is working to right that shameful imbalance. The Oscar winner has reportedly made a “significant” contribution to funding a screenwriting lab for women over 40, called the Writer’s Lab, that will be run in collaboration with New York Women in Film and Television and IRIS, a female filmmaking collective. The program will mentor eight promising screenwriters, with high-profile mentors like "Love and Basketball" director Gina Prince-Bythewood and "Boyhood" producer Caroline Kaplan. Basically, that world-historical Oscar finger-point wasn't just for show.

Melissa Leo
Streep isn't the only Oscar-winning actress helping to fund female screenwriters. At the Whistler film festival in 2013, Toronto filmmaker Ingrid Veninger asked if anyone in the audience would volunteer to donate $6,000 to fund the Femmes Lab, which would find six screenplays by female screenwriters. Melissa Leo raised her hand and shouted, “I’ll do it!” Later, she hosted the six screenwriters at her home and gave them feedback. Despite famously saying in an interview with Salon that she was "no feminist," Leo -- who also mentors young actresses via the Women in Film Mentoring Program -- is putting her money, influence and expertise behind the cause.

Reese Witherspoon
After years in the studio system, Witherspoon was frustrated by the overwhelming lack of strong female roles she saw in front of her.  “Other than one studio, literally one, nobody was developing anything with a female lead,” Witherspoon told the New York Times. “It just hit me like a ton of bricks. And I was so mad. And then I thought: ‘Why am I so upset about this? Why don’t I do something about it?’” And she did. In 2012, Witherspoon launched Pacific Standard alongside Australian producer Bruna Papandrea, with the goal of developing films with quality lead roles for women. They’ve had two hits so far, with “Gone Girl” and “Wild" (starring Witherspoon), while the buddy comedy "Hot Pursuit," starring Witherspoon and Sofia Vergara, is next on the docket.

Geena Davis
Through her nonprofit, the Geena Davis Institute on Gender in Media, the "Thelma and Louise" icon fights to combat gender stereotyping and gender imbalance in film, particularly in programming aimed at children. The Geena Davis Institute conducted one of the largest ever studies on gender in children's programming, and discovered that only 17 percent of people in crowd or group scenes were women. Davis then began confronting top Hollywood brass with her findings and campaigning to get more female faces on-screen. "What are we saying to kids when the female characters are hyper-sexualised, narrowly stereotyped or not even there?" explained Davis in an interview with the Guardian. "The message clearly is girls are not as important as boys, women are not as important as men and they take this all in completely unconsciously."

Lena Dunham
In addition to her history of feminist activism, Lena Dunham, along with “Girls” co-showrunner Jenni Konner and producer Erica Naegle, has launched a production company called A Casual Romance that will develop TV and film projects that "push the ball forward on gender and sexuality in interesting ways.” So far, A Casual Romance has produced “It’s Me Hilary: The Man who Drew Eloise,” about illustrator Hilary Knight, and is working on two more documentaries that both center on transgender identity. A number of scripted series are in the work as well, all with an eye toward including more marginalized voices in the conversation. “The statistics are pretty abysmal,” says Dunham in a recent Variety profile. “It’s our job as women who have been given a certain amount of success and visibility to pull other women along with us.”