Forget Marco Rubio: This is what a transformational Republican actually looks like

If the GOP were serious about remaking its image, it would turn to Brian Sandoval -- but they aren't, so they won't 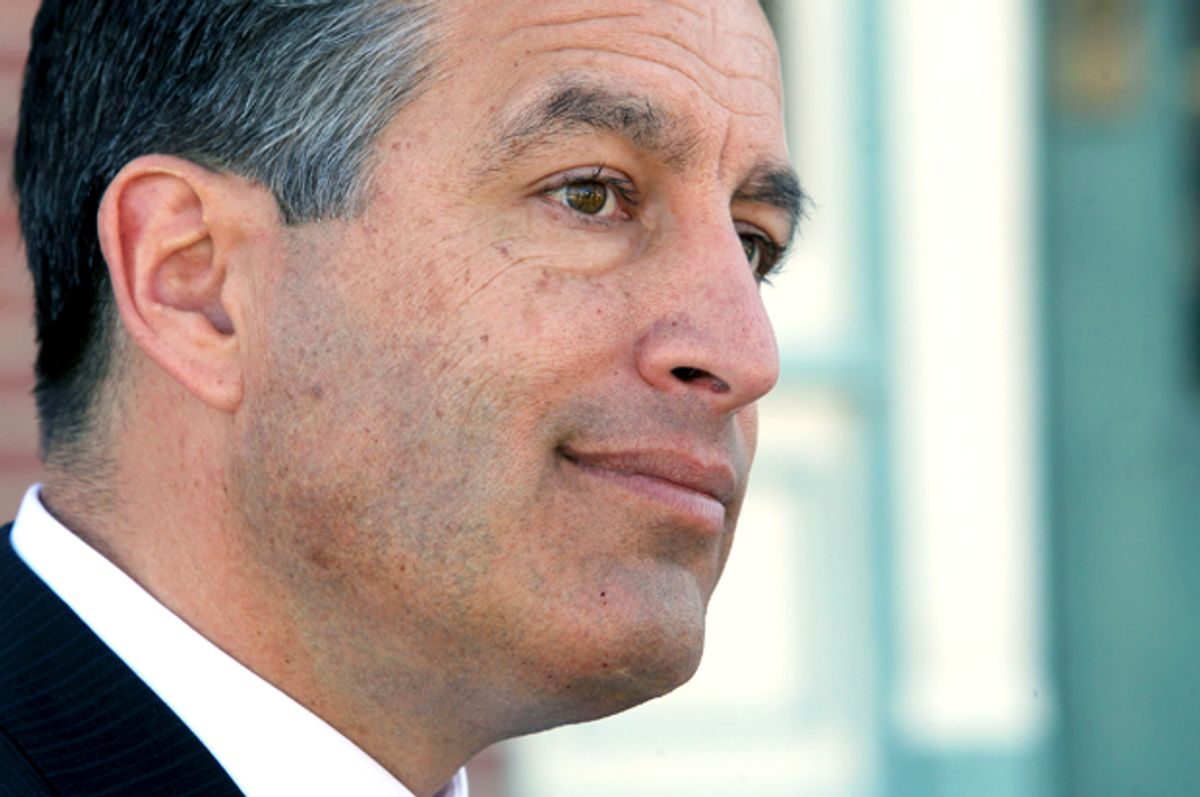 In a Wall Street Journal op-ed last month, GOP pollster Whit Ayres brought grim tidings to his fellow Republicans. While Democrats in 2016 face the daunting challenge of holding onto the White House for a third consecutive term, Ayres wrote that Republicans nevertheless "stand a slim chance of winning the presidency" next year -- "unless they nominate a transformational candidate who can dramatically broaden the GOP’s appeal." Accordingly, Ayres has signed onto the nascent presidential campaign of Florida Sen. Marco Rubio, whom he believes can deliver the party from demographic doom.

“We need to nominate a candidate that sends a message that we want Hispanic-Americans in the center-right coalition – that we want you as part of our team, because the Republican values of equal opportunity for all and greater economic growth and limited government work for all people regardless of race, creed or color," Ayres told a reporters' breakfast in late March, hailing Rubio as precisely the sort of "transformational" candidate he'd called for in his Journal piece.

As my colleague Simon Maloy has ably documented, however, there's considerable peril in billing Rubio as a revolutionary Republican ready to remake the electoral map. Sure, he's young -- he turns 44 next month -- and as a Cuban-American, he breaks the GOP's traditional demographic mold. But Rubio offers little more than a younger, non-white voice for the same stale conservative boilerplate on abortion rights, same-sex marriage, taxes, climate change, health care, and foreign policy. There was that episode in which he led the GOP charge for immigration reform, but he's since backed down on that front. The man may give a good speech, but only if you ignore what he's saying.

Contrast candidates like Rubio -- and his mentor-turned-rival Jeb Bush, another Republican whose odd heresy or two has fed the wildly inaccurate perception that he's a "moderate" -- with GOP Nevada Gov. Brian Sandoval. Unfamiliar with the 51-year-old? You could be forgiven; with much of the political class's attention focused squarely on the 2016 presidential sweepstakes, Sandoval is hardly the subject of much national media attention, given that he's not among the roughly 165 Republicans considering a presidential bid. And therein lies the nub of the matter: As a former federal judge, a young-ish Latino with broad electoral appeal, and a popular swing-state governor fresh off a smashing 47-point re-election victory, Sandoval looks, on paper, like an obvious contender for the GOP's nod -- particularly if the party wants to get serious about rebranding itself.

But it doesn't, and it won't. Because the very things that propelled Sandoval to his November 2014 landslide -- namely, moderate policies, as opposed to a savvy repackaging of right-wing dogma -- would prove fatal in a national GOP primary. Now, Sandoval is no progressive -- he's a corporate-friendly Republican, backs the so-called education "reform" agenda, has battled labor unions, and opposes Obamacare. But he also bucks his party on a wide range of issues: Despite his opposition to health care reform, Sandoval was the first GOP governor to embrace Obamacare's Medicaid expansion, declaring that doing so was "a way for me to protect [low-income] people," a goal that generally does not top elected Republicans' priority lists. On social issues, he favors abortion rights (albeit with caveats), and he famously dropped his legal defense of Nevada's marriage equality ban. While Sandoval has not fully embraced marriage equality, his record on LGBT issues is remarkably progressive in other respects, particularly on transgender rights; Sandoval signed a transgender hate crime bill, was poised to veto a bill allowing discrimination against transgender students (it failed yesterday); and he appointed a transgender woman to Nevada's Equal Rights Commission in 2012.

As Jon Ralston, Nevada's premiere political reporter, told Salon this week, Sandoval hasn't always conveyed such a moderate image. Though he compiled a centrist track record in the state legislature and as attorney general, Sandoval tossed plenty of red meat to the GOP base in his successful 2010 primary campaign against incumbent GOP Gov. Jim Gibbons. Sandoval expressed support for Arizona's SB 1070 law, which cracked down on unauthorized immigrants, and he vociferously opposed tax increases. Since then, however, Sandoval has returned to moderate form, endorsing the 2013 comprehensive immigration reform effort, butting heads with GOP Attorney General Adam Laxalt over Laxalt's decision to sue to stop President Obama's deportation reprieves, and proposing new business taxes to fund education. The state Senate passed Sandoval's $437 million tax increase on Tuesday, although it now faces a right-wing rebellion in the GOP-controlled state Assembly.

To be sure, Sandoval's 2014 triumph can't be chalked up solely to his political moderation, although it certainly didn't hurt him among the independents and many Democrats who cast their ballots for him. After the 2010 election -- in which he defeated then-Senate Majority Leader Harry Reid's son by 11 percentage points -- Sandoval had the good fortune of presiding over an improving economy, and Ralston noted that his "preternaturally likable persona" proved a major boon, as well. Combine those elements with the the lack of a deep Democratic bench, Ralston said, and you had the makings of a Republican revival.

A great irony of Sandoval's political success -- noted in a recent Wall Street Journal profile -- is that a number of Republicans far more conservative than the governor have ridden to office on his political coattails, complicating his plans to steer a moderate course.

"There are certain members of the caucus who don’t care that he has a 70 percent approval rating and will never listen to him," Ralston said. "They think they have orders from God to stop tax increases, and they aren't going to back down."

That implacability is shared by much of the national GOP primary electorate, which doesn't much care that Sandoval's middle-of-the-road approach to social issues, taxes, and immigration reflects the set of policies that could help the party win over skeptical women, Millennial, and Latino voters. Take the latter group: Latinos in swing states like Florida overwhelmingly back Sandoval's position on expanding Medicaid; and despite lazy assumptions to the contrary, polling suggests that most Latinos also support abortion rights and LGBT equality. A candidate like Bush may get a foot in the door with Latino voters because he opposes maximal deportation policies on immigration, but once Latinos look beyond that issue, they're unlikely to find much they can support in Bush's agenda. With Sandoval, however, there's considerably more common ground.

Because Sandoval could scramble the electoral map, there are murmurs of speculation that he may be selected as the GOP nominee's vice presidential running mate in 2016 -- a prospect that already has the right riled up. It's hard to see how the Republican base would abide such a selection, however, given the ferocity with which it pushed back against John McCain's abortive attempt to add the pro-choice Joe Lieberman to his 2008 ticket. A pro-immigration reform ticket is more plausible than you may think -- but a ticket featuring a candidate who's pro-immigration reform, pro-Medicaid expansion, pro-choice, pro-LGBT, and pro-tax increases? Not. Gonna. Happen.

Come 2024 -- when a 61-year-old Sandoval will still be far from his presidential sell-by date, and by which point demographic realities could force a more pragmatic GOP approach on hot-button issues -- a candidate in his mold may make his or her way onto a GOP ticket, but that's about as early as we can expect it.

So what does Sandoval's future hold? Ralston told Salon that Sandoval appears to genuinely enjoy being governor, so he may yet serve out his term. A 2016 Senate bid to succeed the retiring Harry Reid looks unlikely, as the governor has shown no interest in seeking the seat, although national GOP bigwigs will pressure him to reconsider once the current legislative session ends. Even if Sandoval remains resolute in sitting out the race, however, he may well be moving on from Carson City come January 2017.

"I think he’d be a very, very attractive candidate for either a Democratic or Republican president to be Secretary of the Interior," Ralston said.

An interesting possibility indeed -- but one wonders if that's really the optimal use of Sandoval's political talents.