"When it comes to flesh and blood versus base, Republicans are having a hard time choosing base over family" 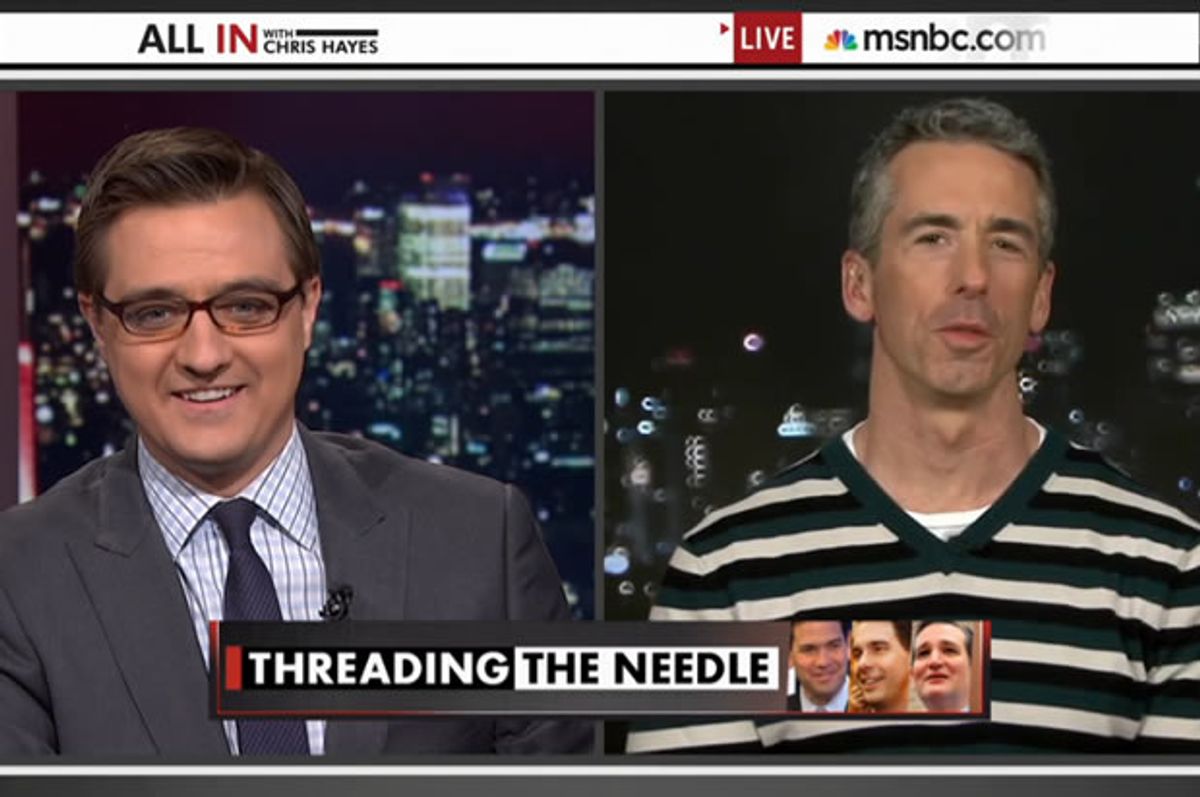 On "All In" last night, Chris Hayes spoke with sex columnist Dan Savage about the meandering answers GOP candidates have been giving to the question of whether or not they would attend a gay wedding.

Hayes began by comparing Scott Walker's answer -- that he would attend the reception, but not the ceremony -- to Bill Clinton's infamous statement that he tried marijuana, but never inhaled. In both cases, Hayes argued, a presidential candidate was attempting to respond to a question addressing an issue about which the general public was already to the left of political common sense.

All five of the potential GOP nominees who have answered this question, Hayes said, are "desperately trying to navigate some very uncomfortable territory as social norms around marriage equality and gay rights are changing."

Savage agreed that Walker's answer was "an elegant attempt to thread a very fine needle," adding how it was amusing to watch how the issue of gay marriage is dividing Republicans between "their own family members and the bigoted Republican base."

"But for me," he continued, "the question is why you would invite someone to your wedding who didn't think you should be having one." It's the equivalent, he said, of inviting someone to your birthday party who didn't believe you deserved to have another birthday.

Savage urged the media to interview the "imaginary, hypothetical gay friends who would apparently invite [GOP candidates] to a gay wedding." He noted that in the case of Scott Walker, it was his own sister whose ceremony he claimed he would not have attended.

"When it comes to flesh and blood versus base," Savage said, "a lot of Republicans are having a hard time choosing base over family." He identified this as "the trajectory of the whole LGBT civil rights movement in a nutshell."

The conversation shifted to the answer Rick Santorum -- a man with whom Savage is very familiar -- gave to conservative radio host Hugh Hewitt, which the pair agreed at least had the virtue of being "philosophically consistent." But, Savage noted, the Catholic faith that Santorum said would compel him to decline an invitation to a same-sex wedding has already moved beyond his position. "He's out-of-step with American Catholics," Savage said, "who are, by a wide majority, supportive of marriage equality and full civil rights for LGBT Americans."

Watch the entire segment from "All In with Chris Hayes" below via MSNBC.