Cops are the terrorists in our neighborhood: On Freddie Gray, another victim of police brutality

Where I live, the consequences of misunderstanding a cop could be death. Here's what young black kids need to know 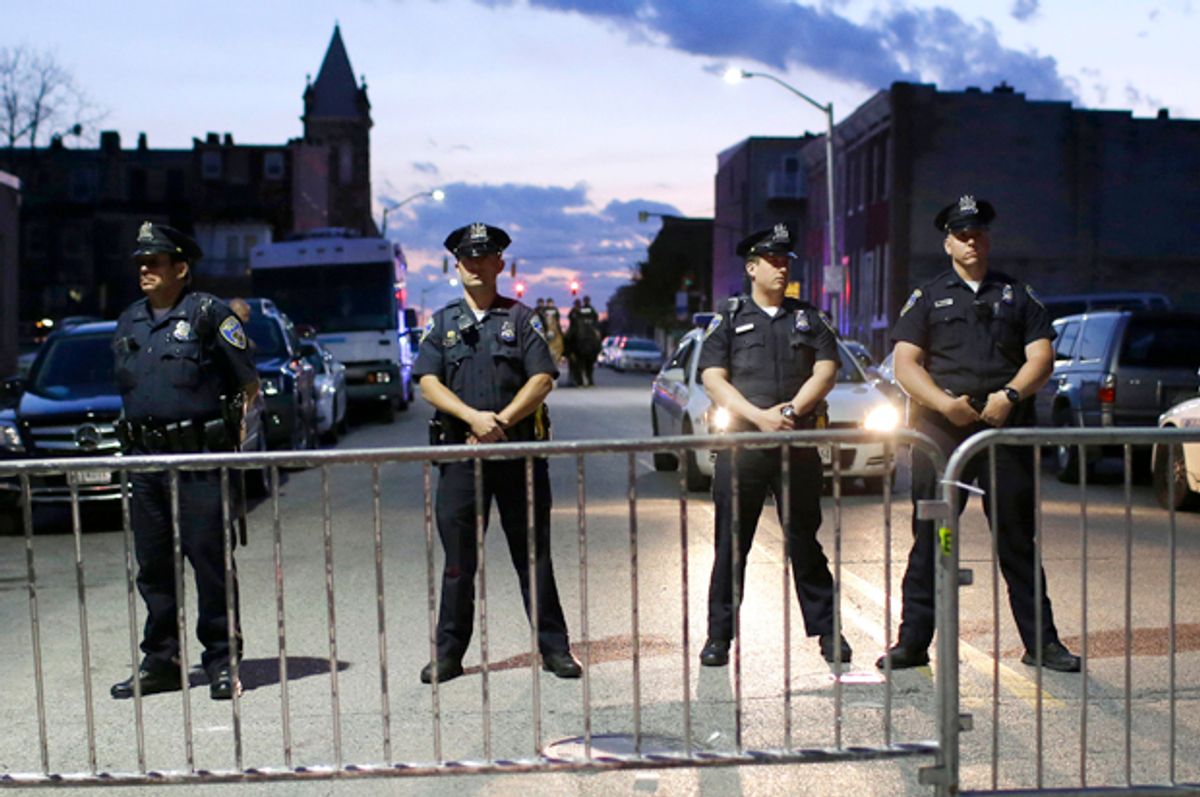 GD is a high-energy guy, always turned to max. Happy or sad he’s bouncing off walls and jumping up and down and down and up, spitting emotions out like spoiled milk.

A few days ago I caught him during one of the sadder moments. Some of the people on the corner were quiet while others vented about how racist the Baltimore police department is, and GD slugged the street lamp like he was training for a prizefight.

“Yo them bitch ass cops! Scared ass cowards,” he bawled, kicking the same pole he’d been banging. “Freddie Black is gone. Man, he was a good dude!”

His sister and I walked over to console him, and he slang elbows at us, fell to his knees and asked god why.

“Freddie Black” is what GD and some of his other friends called him. His real name was Freddie Gray. Gray, 25, was minding his business near Gilmore homes when the cops tried to stop him for no apparent reason.

He ran, like a lot of black men do when we see cops, because for our generation, police officers have been the most consistent terrorists in our neighborhoods. Plus we are currently in a culture where a cop can shoot you if you put hands up, or if you follow their directions, or if you lie down, or if you are asleep. I swear they see black skin and think bull’s-eye.

A pack of BCPD officers pursued Gray in traditional bully fashion, caught him, found a legal pocketknife and arrested him for no reason. Who knew that running with a pocketknife is against the law in Baltimore? Once they got Gray into the van, he seems to have been taken on what we call a Nickel Ride, which is basically when cops throw you in a vehicle, drive crazy and beat you until you reach the police station.

The cops who arrested Gray apparently took it to another level, severing his spinal chord and smashing his voice box. Police officers are responsible for following the rules provided by the Red Cross or National Institute of Health: Do not bend, twist or lift the person's head or body, do not attempt to move the person before medical help arrives unless it is absolutely necessary and do not remove any clothing if a spinal injury is suspected. Instead these officers beat and dragged his lifeless limbs across the pavement that probably caused further damage to his spinal column.

Gray died in the hospital days later. Now it’s national news and protests are popping up all over the city. Mobs of people, sick of the stories of innocent kids like Gray being murdered over and over again.

America is in a state of emergency. I’m not sure why I don’t see the president setting our terrorist level at bright orange, because the story of a cop killing an innocent black person surfaces every week. It’s important that we use the term “innocent” when describing these victims because in America, you are innocent until proven guilty and these slain African-Americans aren’t getting their day in court. There’s so may cop killings in the news right now that I’d be surprised if any black person stopped on command­ — black bodies are piling up, and I can’t even keep up with the names anymore.

Lately I’ve been having that cop talk a couple times a week with my nieces, nephews, or with young people at high schools and middle schools. The convo goes the same way every time. I start out by saying, “Your lives matter. I swear to god they do!” I have to reiterate this as much as possible, because society is telling a different story.

Then I tell them I know every time they check the news or log on to Twitter or Instagram or Facebook or WorldStar, they are seeing people that look just like them being gunned down as if they aren’t human by police officers — and many times, those officers get away, but despite that, you do matter. The fact that similar videos surface of white officers like Jesse Kidder of Ohio trying their best to not shoot dangerous white men weakens my claim.

But still I tell them that they matter, even though our legal system is obviously lopsided. I tell them they are human and the problem is that many of these officers don’t understand that. They are part of a long history of Americans who don’t see value in African and African-American life, leading all the way back to the days of slavery when it was legal to treat blacks as subhuman. Back when our own American legal system identified black people as being three-fifths of a human.

I tell them most of these officers who are committing these murders are scared, racist and ignorant, so it’s up to you to understand, because those cops will never understand or care about you. I tell them to master their perspectives and understand what cops are thinking when they see you — because your life could depend on it. The consequence of not understanding police officers is death.

And then I leave them with some rules to follow, things we as black people need to know when dealing with cops or being stopped by law enforcement in general.

1) Police officers are like mice — they are more scared of you than you are of them, so don’t startle or they will shoot. Things that startle them include speaking loud, being black, moving your hands, and running. If you move your hands or run, they could kill you.

2) Answer their questions in a clear manner. Expressing anger scares them and could lead to your death. Remind them that you are a person; sometimes they forget or were never taught that black people were human. Tell them that you don’t have weapons and assure them that they are safe. When police officers don’t feel safe around black people, they shoot.

4) Never think a cop won’t shoot you. Your blackness makes you a target to them and in many cases it doesn’t matter if you are guilty or innocent.

I close by telling them I know it’s hard to remember these rules when you are an innocent person with a gun jammed in your face, but maybe -- they'll finally see you as a human. If they come to believe that you are human, then they won’t be so quick to shoot. I have to believe this. Even if it's not true.