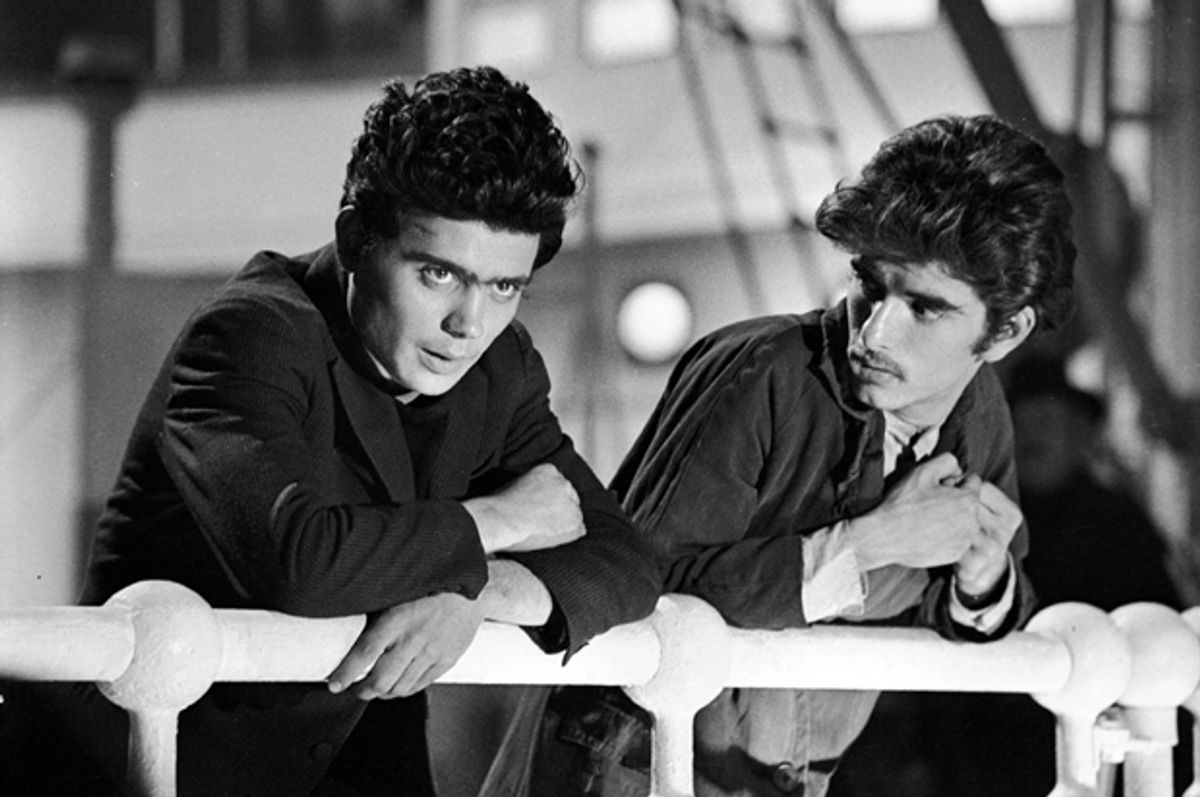 In the era before the phenomenon of the human rights film—a genre that seems to have begun in the 1980s with “Gandhi” (1982) and “The Killing Fields” (1985), and would see a proliferation of such films by the first decade of the 21st century including “Rabbit Proof Fence,” “The Pianist, “ “Ararat,”  “Hotel Rwanda,” “The Last King of Scotland”-- few films dealt with the complex regions of human rights histories in foreign countries. I’m excluding, of course, the war film, a steady genre since the 1920s, accelerating in the 1940s with films about fighting the Nazis.

But there was at least one exception---Elia Kazan’s Oscar-winning "America America," which became one of the most daring human rights films in cinema history. In it, Kazan brought the plight of the Armenians and Greeks—the major Christian minorities in Turkey-- at the turn of the 20th century into a sharp and dark focus, and he depicted the Turkish massacres of the Armenians in an unprecedented way.

For a film that was a runner-up for best picture of 1963 and best screen adaptation and won an Oscar for art direction, it’s odd how little known the film is.  And, for a film that dramatically depicted the slaughter of Armenians by the Ottoman Sultan on a big Hollywood screen, it has been oddly overlooked or misunderstood by film critics, scholars and popular audiences — even those with a deep interest in human rights and this particular history.

Films fall off the radar all the time, for many reasons. But at this centennial of the Armenian Genocide, it’s a moment to take another look at the film Kazan called his own favorite, and which the Kazan scholar and film critic Foster Hirsch has called an “American masterpiece.”

"America America" is the story of a young Greek man’s harsh journey out of Turkey in the late 1890s. The protagonist, a young man named Stavros, has been awakened to the plight of the Christian minorities in Turkey through the violent treatment of the Armenians including his best friend and symbolic big brother—Vartan.

The film opens with the dramatic massacre of the Armenians in Stavros’ village in central Turkey.  The Sultan has ordered empire-wide killing of Armenians in response to a group of activist Armenians who have taken over the Ottoman Bank in Constantinople (now Istanbul) in a desperate effort to get the European Powers to intervene to stop the Sultan’s massacres of the Armenian population in the previous year. As the local Ottoman officials deliberate over the orders from the Sultan in their bureaucratic chambers in a provincial Turkish town, Kazan’s mise-en-scène has all the meticulous detail of his best interior social and cultural settings.

From there, Kazan creates scenes of a terrorized Christian village in Turkey. We watch from an aerial perspective as the doors and shutters of houses and stores are shut and slammed as Armenians and Greeks run through the streets in terror. In the film’s black-and-white, shadows and glaring light create a surreal-like feel.

We see the Armenian population flocking to their church for protection. Kazan captures the terror in the faces that are running, watching, hiding. In an extraordinary scene that depicts this kind of mass killing, perhaps the first such scene in a Hollywood film, Kazan’s depiction of Armenians being burned alive in their formidable church in the center of town brings together political realism with an expressionistic aesthetic that recalls "On the Waterfront" or "East of Eden." In a darkly lit scene at the local raki club a man shouts, “It’s beginning!” and we understand that the massacring of Armenians has a ritualistic aspect to it— and the local population has been waiting for the sign to be given.

Kazan then cuts to the inside of the church where Armenians are congregated, as candles and incense cloud the interior, and a priest leads them in prayer. The Armenians in the church are chanting (in Armenian no less) "Devormyah" ("Lord have mercy"). Then there’s a cutaway to Turkish gendarmes surrounding the church, carrying torches and brush; then a cutaway to the interior of the church, where men, women and children are singing as the church fills with smoke and the icons and crosses and altar are enveloped. Outside, a priest is humiliated; he fights back, and a gendarme puts a lit torch in his hand and throws the hand of the priest into the burning church.

As flames engulf the church, we watch smoke fill the narthex; the sound of Armenian words and the screams of the dying dissolve into flames; we watch some people escape, and then Stavros’ best friend Vartan is embroiled in a fight to defend his fellow villagers. Then images of smoke and fire are juxtaposed in such a way that the scene swirls and fades to a vortex of flame and black sky, and the music crescendoes in an atonal flourish.

When Kazan cuts to the smoke-covered remains of the church, the dead are scattered in the streets; it is like watching the images of aftermath and ruin we have become accustomed to seeing on our screens. Then we see Stavros sitting next to Vartan’s corpse. Few scenes in the history of film at that time gave us such insight into the dynamics of state-sponsored mass killing, human rights atrocities and assaults on a targeted ethnic group.

After witnessing the Armenian massacre, Stavros’ family decides to send him, with all the family’s wealth, on a perilous journey across Turkey in order to take passage to America. The film then becomes one of the great bildungsromans in film history. Stavros’ journey is brutal; his initiations into violence and corruption are many, and his journey remains intertwined with various Armenians who continue to be sources of agency for him on his voyage to the land of freedom.

I have no idea if Kazan knew that the Turkish government succeeded in stopping MGM’s production of Franz Werfel’s best-selling novel "The Forty Days of Musa Dagh" in 1935 by coercing FDR’s State Department; "The Forty Days of Musa Dagh" would have been a film that portrayed the Armenian genocide with historical drama at a timely moment. Whatever Kazan’s knowledge of Turkish interference with intellectual freedom in the United States was, he did have a keen knowledge of the massacres from his family. “One of the first memories I have,” he said in an interview, “is of sleeping in my grandmother’s bed and my grandmother telling me stories about the massacre of the Armenians, and how she and my grandfather hid Armenians in the cellar of their home.”

Kazan’s explorations of history and corruption, of human violence and resilience, were insignias of some of his greatest films. "A Gentleman’s Agreement" (1947) was a daring exposé of anti-Semitism in American culture; "On the Waterfront" (1954) was a story of an individual’s heroic resistance to mob corruption and labor union struggles among the dockworkers; "A Face in the Crowd" (1957) was a dark portrait of a megalomaniac con artist and his manipulation of mass media and advertising culture, and the soulless terror of that culture. But "America America" took Kazan’s passion for probing institutions of human violence to a new place and a new historical reach.

A hundred years after the Armenian Genocide, Kazan’s favorite film takes us into the complexities of history as few films have. His aesthetically inventive depiction of the struggle of the Greeks and Armenians of Turkey at a crucial point in the history of the Middle East did something new in the history of cinema. I wonder if viewers of the Oscars in 1963 who were captivated, as I was, by Albert Finney in the bawdy picaresque tale of "Tom Jones" (which won the Oscar for best picture over "America, America") understood what the film was about.

Peter Balakian is the author of "Black Dog of Fate" (PEN/Albrand Prize for memoir) and "The Burning Tigris: The Armenian Genocide and American’s Response," winner of the Raphael Lemkin Prize and a New York Times Best Seller—both New York Times Notable Books; and 7 books of poems including the forthcoming "Ozone Journal" (University of Chicago Press) and the forthcoming "Vise and Shadow: Essays on the Lyric Imagination, Poetry, Art, and Culture" (University of Chicago Press). He is Donald M. and Constance H. Rebar Professor of the Humanities at Colgate University.