"You are entitled to this”: The real reason Amy Schumer's rape culture takedown is so perfect

"Football Night Lights" is an epic takedown about rape culture. But the laugh lines about rape are only half of it 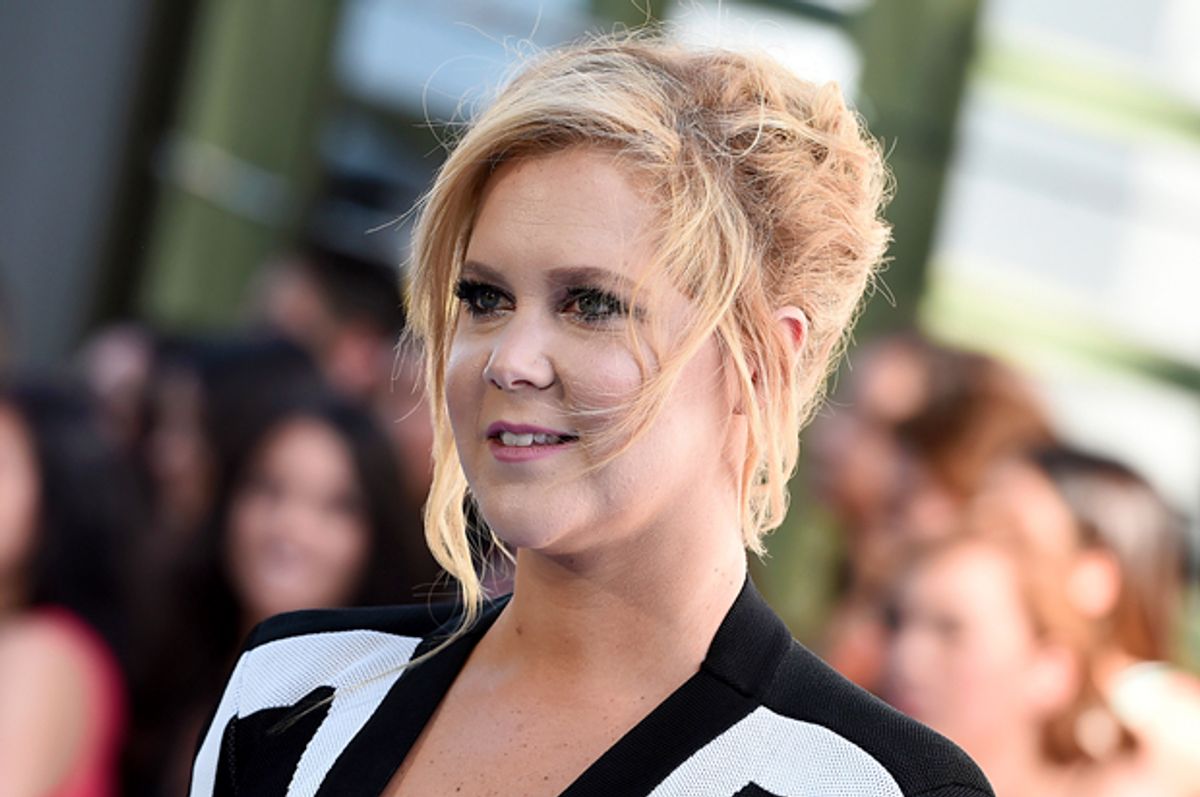 It turns out that the sentimental premise of "Friday Night Lights" lends itself incredibly well to a feminist joke about rape. "Football Town Nights," the perfectly conceived sketch about rape culture and sports culture from the season premiere of “Inside Amy Schumer,” is a reminder that comedy is very much a tool to smash the patriarchy. The sketch has Schumer as a boozy Tami Taylor and Josh Charles (related: JOSH CHARLES JOSH CHARLES JOSH CHARLES) as the sage but tough football coach with one big rule for his new team: no raping.

He makes the announcement during his first day on the job, and the players freak as though something sacred has been taken from them. “But coach, we play football!” one guy shouts in protest. “Can we rape at away games?” wonders another. “What if she’s drunk and has a slight reputation and no one’s gonna believe her?” someone shouts out. (That last one is among the more dagger-sharp of all the boys' protests and pleas for caveats. And this: "What if the girl said yes, but then she changes her mind out of nowhere -- like a crazy person!")

The town loses it, too. Another team official walks out of the locker room in disgust. Later on, two sweet old ladies confront Charles and Schumer in front of their house. “Hey, you’re that new coach who don’t like raping!” one of them yells. “How are our boys supposed to celebrate when they win?” demands the other.

Everyone in the sketch is a target -- except rape victims. In an interview with ThinkProgress culture editor Jessica Goldstein, Christine Nangle, the writer behind the sketch, said that was deliberate. Nangle explained that it was a "conscious choice not to put any girls in it" because she wanted the story “to figure out the messages that [young men are] getting. I don’t want that to say that any of these guys who do terrible things aren’t in charge of their actions, but in this particular sense, I wanted it to be about their surroundings.”

It succeeds brilliantly. I love it. I want to marry it. The next time someone on the Internet tells you that rape culture doesn’t exist or is too vague a term to be meaningful, make them watch “Football Town Nights.”

The sketch mocks the cultural attitudes that foster sexual aggression and condone rape. It is equal parts hilarious and horrific to watch these boys -- and this entire town, really -- protest for their right to rape. But here is what makes the whole thing even smarter: The joke doesn’t end there.

The most incisive part -- the sketch at its most blistering -- comes at the end, when Charles tells his players, “How do I get through to you boys that football isn’t about rape -- it’s about violently dominating anyone who stands between you and what you want. You’ve got to get yourself in the mind-set that you are gods, and you are entitled to this! That other team, they ain’t just gonna lay down and give it to you! You’ve got to go out there and take it!”

This is what rape culture is -- what it does. It is insidious double messaging. It normalizes and reproduces sexual entitlement and male aggression even as it insists that rape is very, very bad. Think about it in more direct terms. Ask the average dude if he thinks rape is awesome and he is going to say no. With few exceptions, the general consensus on rape is that it’s no good.

But as we’ve seen again and again anecdotally and as social scientists have documented many times over, put the question slightly differently, and the answer changes. A recent study from the University of North Dakota found that 31 percent of the college men researchers interviewed reported that they would force a woman to have sex “if nobody would ever know and there wouldn’t be any consequences.”

That number dropped considerably when researchers posed the same question but this time asked the men if they would rape a woman if they could get away with it. Replace the language of forced sex with the word “rape” and only 13 percent of respondents said they would do it. (Not that this is exactly a heartening data point or anything.) Respondents, it seemed, were comfortable with the act of rape, just not the word.

Here’s how Sarah Edwards, lead researcher on the study and an assistant professor of counseling psychology, explained it to me when I interviewed her earlier this year:

Researchers have known for a very long time that it really matters how we ask the question. For example, if we ask people if they rape or have raped or have been raped, you get fewer responses than if you ask people about descriptions. Like, “Have you ever forced anyone to have sexual intercourse” or “Have you ever been forced to have sexual intercourse?” You have many more people who will say yes to those questions.

What “Football Town Nights” and research like Edwards’ get at is that it isn’t enough to say rape is bad. You have to start looking at the ways that male entitlement and sexual degradation get communicated in much subtler ways. In fact, other studies have shown that the “rape is bad” messaging isn’t even all that effective in a cultural context where people have a really hard time identifying rape as rape or believing themselves or their loved ones are capable of it.

Here’s how Edwards explained it:

Preliminarily, based on this study, what I am thinking is that we have to be careful in terms of how we phrase prevention programs because if we want to address that middle group of men, who do not seem to self-identify their actions as rape, that group of men might actually be very taken aback or put off by a program to prevent rape. Because in their minds they are not rapists, so they might block that message out and feel that it’s not applicable to them.

These are the limits of how we tend to talk about rape, we search for monsters lurking in the night and ignore what's in front of us. And this in turn limits how we talk about what needs to be done to stop rape. Consent education should be an essential part of learning at any age and any grade. Bystander intervention programs can raise awareness and increase a sense of community accountability. Getting more people to say “don’t rape” is incredibly important. But we also need to address the norms about male entitlement and sexual aggression that are much more subtle, and pretty foundational to how things work.

Much as the NFL believes it can address sexual and domestic violence among its players (or at least its brand crisis as a safe haven for men who abuse women) with expensive Super Bowl ads, the louder message it sends to players and coaches is that they can act with impunity as long as they can perform. Because at the end of the day it's all about the game. Because they are entitled to this. That's why a civil suit against Jameis Winston related to allegations that he raped Erica Kinsman hasn't hurt his prospects as a top pick in the draft. It's why Greg Hardy is currently playing for the Dallas Cowboys despite his record of domestic violence. It's why alleged serial rapist Darren Sharper could still make it into the Hall of Fame.

“Football Town Nights” is as much about toxic masculinity as it is about rape culture, and it ends darkly. Charles, the firm but kind-hearted football coach who just wants his boys to stop raping, is working them into a lather about how they are above asking for what they want -- that it's all just theirs for the taking. He can say “don’t rape” all he wants, but the message “you are entitled to this” is the one that the boys take with them as they charge out of the locker room.

I laughed, then I felt incredibly queasy. A good rape joke will do that to a person.