2016 gets even dumber: New York Times wonders whether Jeb's elitist weight loss will doom him 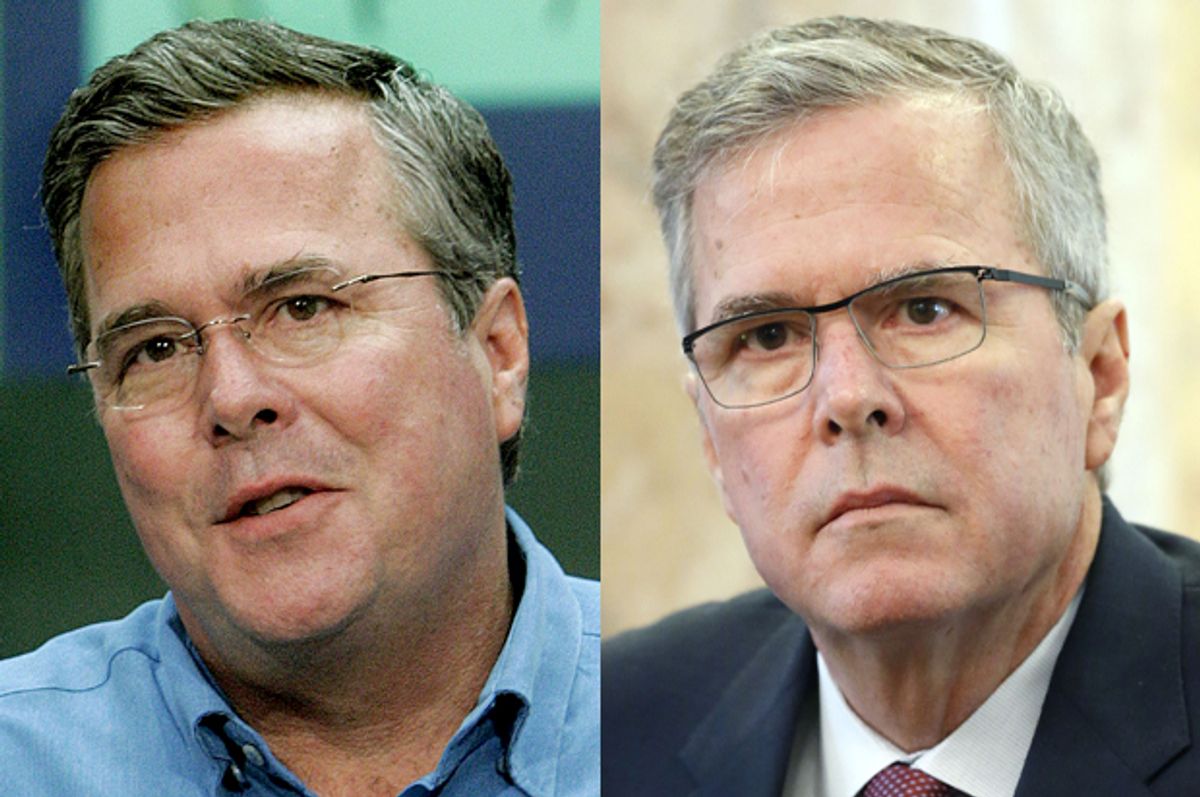 Jeb Bush is rapidly losing weight, and the New York Times is on it. The former Florida governor has lost 30 pounds since December on the Paleo diet, the fad du jour where you eat only things cavemen ate, like rocks and dirt and the flesh and brains of your vanquished foes from the nearby heathen tribe. Also: salad.

Bush was never really fat-fat, but he apparently thought he was, and he definitely was by the stringent standards of New York Times reporters. Now, thanks to a diet of relative self-starvation and regular exercise, Jeb Bush has burned back the excess flab to carve out the more respectable figure of a famished ghoul. "Mr. Bush has started buying a new wardrobe to replace oversize shirts," the Times writes, "and having wide pants that no longer fit his diminished figure taken in." (Yes, and may we add that he needs to iron out the creases of those new shirts. Jeb!)

The Times can't simply write a lifestyle story about Jeb's diet and exercise and leave it at that, though. It has to throw in the political dimension, and it does so in spectacular fashion:

The rigid abstemiousness runs the risk of putting him at a dietary distance from an American electorate that still binges on carbohydrates and, after eight years of a tea-sipping president, craves a relatable eater-in-chief.

It is a proud tradition for campaign reporters based in New York or Washington to worry on behalf of the candidates about how the fat, vulgar slobs of middle America will receive them. It is the conventional wisdom among top reporters that a full 100% of the electorate in Iowa, in addition to being functionally illiterate and hypnotized by some obscure mystical persuasion called "religion," eats nine pounds of cheeseburger-flavored pancake pies soaked in butter per day. The traditional Heartland nightcap is a 64-ounce cup of uncut trans fats, and sodium.

And if the candidate doesn't eat the same things that these disgusting, gluttonous cretins eat, they will chase the candidate down with pitchforks and AR-15s and other makeshift family-heirloom death weapons and kill him for being "fancy." Or perhaps they will just eat you -- how Paleo! -- so insatiable and primitive are their appetites. (The other side to this conventional wisdom, of course, is that you can't be too fat. Ideally you want to be 22, 23  pounds overweight if you wish to become President of the United States.)

The idea that Jeb's elitist diet-and-exercise regimen may thwart his ability to "relate" to the drooling, carb-hoovering, bedridden trolls of Real America brings to mind stories from two election cycles ago, when the "tea-sipping president" was running his first presidential campaign.

"Too Fit To Be President? Facing an Overweight Electorate, Barack Obama Might Find Low Body Fat a Drawback." This was an August 1, 2008 story from the Wall Street Journal's Amy Chozick, now the New York Times' Hillary Clinton reporter.

But in a nation in which 66% of the voting-age population is overweight and 32% is obese, could Sen. Obama's skinniness be a liability? Despite his visits to waffle houses, ice-cream parlors and greasy-spoon diners around the country, his slim physique just might have some Americans wondering whether he is truly like them.

The candidate has been criticized by opponents for appearing elitist or out of touch with average Americans. A Wall Street Journal/NBC News poll conducted in July shows Sen. Obama still lags behind Republican John McCain among white men and suburban women who say they can't relate to his background or perceived values.

It was damaging enough that Barack Obama was physically fit. On top of that, the few things he did eat were offensively fancy. See, out there in god-fearing Iowa, they don't take kindly to vegetables, the thinking went. But if you're going to eat something green, it had better be good old iceberg lettuce -- not "ay-roo-gulla," whatever Devil's green that is. We refer you back to the original 2007 New York Times story that launched a thousand right-wing culture war memes:

One line that landed a little flat, though, was when Mr. Obama sympathetically noted that farmers have not seen an increase in prices for their crops, despite a rise in prices at the supermarket.

“Anybody gone into Whole Foods lately and see what they charge for arugula?” the senator said. “I mean, they’re charging a lot of money for this stuff.”

The state of Iowa, for all of its vast food production, does not have a Whole Foods, a leading natural and organic foods market. The closest? Omaha, Minneapolis or Kansas City.

Skinny, physically fit Barack Obama, eating his rich man's lettuce, purchased at a supermarket unknown to immobile Iowans without the means to venture more than a mile or two from their hometowns over the course of a lifetime. So damaging was this gaffe and the smug, cosmopolitan lifestyle it represented that Barack Obama went on to win the Iowa caucuses decisively. He would also win Iowa in both the 2008 and 2012 general elections.

All of which is to say that when the New York Times writes, "after eight years of a tea-sipping president," the electorate "craves a relatable eater-in-chief," it is quite possibly making an unfounded assertion.