I'd visited the Armenian Genocide memorial to remember the dead -- and now it, too, is gone

My grandfather was forced away from his home by the Turks and survived to tell his story. I wanted to honor him too 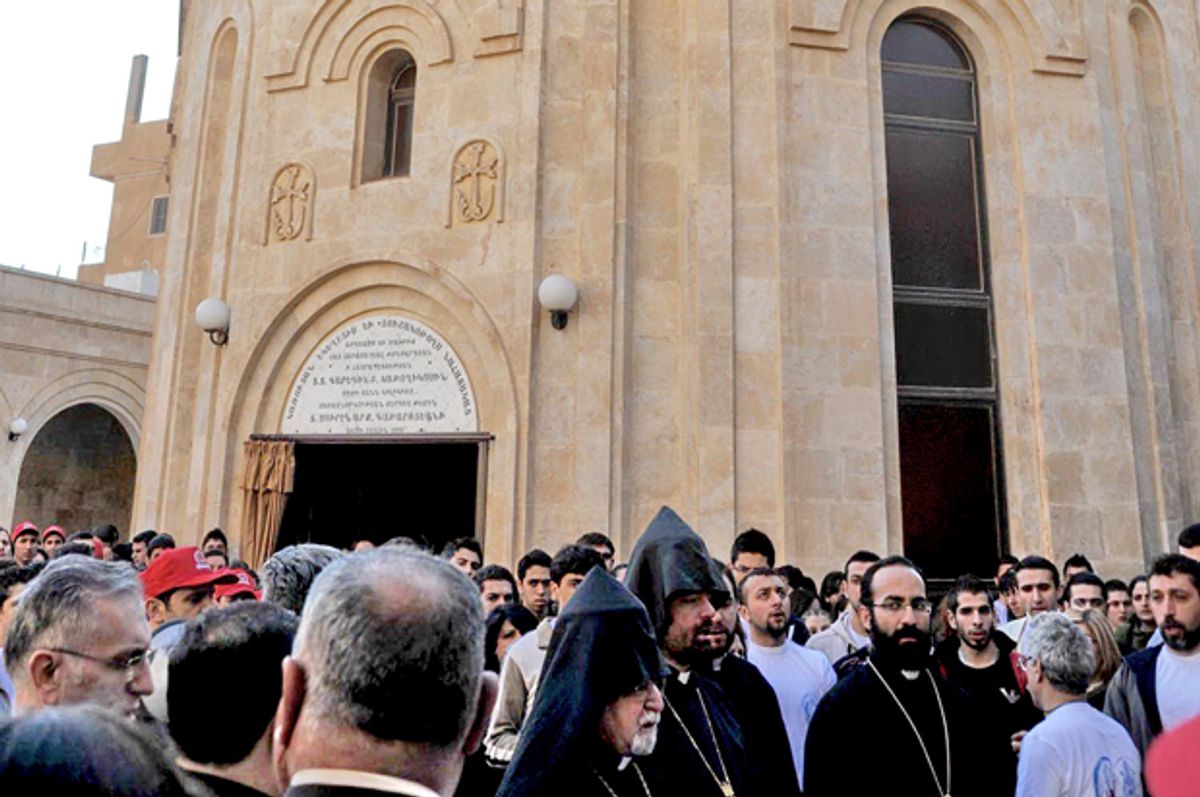 People gather at the Holy Martyrs Armenian Church in Deir Zor, Syria, in 2009, five years before it was destroyed in a bombing. (flickr/Studio Ashnag)
--

The intricacies of the memorial were somewhat obscured from the street. Off-white in color, the Holy Martyrs Armenian Church stretched down the block in Deir Zor, Syria, tall and sturdy, in its position across from the Euphrates River.

Inside, the layout was just as I’d seen in blueprints from the architect, before coming to this region. A long courtyard led to a pointed dome of a chapel that soared upward, underneath which held a museum and remains of the dead. At the moment, I was almost alone here, surrounded by walls adorned with doves to signify peace, and eagles to show courage. I could feel a tranquility settle over me, far from the bustling city outside.

It was the summer of 2007, and I was shadowing my grandfather’s death march a century earlier from Turkey into Syria, across land that was once part of the Ottoman Empire. Pushed along the Euphrates River by foot, along with other Armenians, my grandfather Stepan was exhausted, and hungry for anything, even a sliver of grass.  On the opposite bank of Deir Zor, he joined tens of thousands of other Armenians living in tents, and he spent what he believed were his last days, as the camp was steadily emptied. Broken into caravans, they were led to a spot along another tributary, and massacred. Somehow, my grandfather managed to escape, only to record it all in his journals because he believed it was his responsibility to bear witness.

Like many other Armenians, I’d come to the memorial to remember -- to never forget -- in the same way many travel to Poland to visit the Auschwitz concentration camp. The Holy Martyrs Armenian Church honored the more than a million people who died in Anatolia and in the surrounding desert, after the Ottoman government declared the Armenian Christian population dangerous and uprooted them from their homes, stuffing them into cattle cars and forcing them into marches that led to their deaths. Pope Francis recently called the killings “the first genocide of the 20th century.” To this day, Turkey denies this label, and says the Armenians were traitors and the deportation was justified during a time of war.

As Armenians mark the 100th anniversary of the genocide on April 24, many are still grappling with the fact that the Holy Martyrs Armenian Church is now gone. Last September, fighters broke into the building and blew it up; all these months later, it remains unknown who was responsible. “It’s a terrible act of hatred,” said Chris Zakian, spokesman for the Eastern Diocese of the Armenian Church of America.  “In some ways, I don’t think Armenians have really processed it. But the desecration of the Deir Zor memorial will weigh heavily.”

Today, most of the region is reportedly controlled by the Islamic State of Iraq and al-Sham. Entire blocks of Deir Zor have been obliterated during the war to topple President Bashar al-Assad. Photos on the front pages of international media show the city’s line of tall buildings, with blasted-out windows, the gnarled shell of structures, with a few lone pedestrians stepping over the debris. They are postcards from an apocalypse. To many Armenians, though, the harsh desert around Deir Zor had earned that reputation long before the uprising against the Syrian government descended into civil war several years ago, long before ISIS’ beheading videos, with the stark desert in the background, devoid of any identifying hills or buildings. One century earlier, this was one of the worst slaughterhouses during the Armenian Genocide, a place my grandfather called hell and not much else, where more than 100,000 people lost their lives.

Back then, the killing was done in secret. This was the edge of the Ottoman Empire, a place to deport the minority Christian population, with few eyewitnesses. The blurry black-and-white images from the time bear an eerie resemblance to the digital color ones we see now, of hungry families in rags, and women carrying children under a desert sun, of the persecuted groups being led to their deaths.

“There is a one-to-one correspondence of Armenians being marched to their death and pictures that I can pluck off Corbis and AP today,” said Zakian. “Genocide doesn’t have a single target, as Cambodians and Jews know. Those are all people who have gone through what Armenians have gone through a century ago.”

But while the plight of the persecuted in Syria has been widely documented and recognized, thanks to modern media, the million Armenians who were slaughtered a hundred years ago are still unacknowledged by many Turks. Because of this, the existence of the memorial at the Holy Martyrs Armenian Church was especially significant -- a beacon of hope in a sea of denial.

Los Angeles-area resident Sarkis Balmanoukian knew every block of that structure. In 1985, the Syrian-born architect entered a contest held by the Armenian archdiocese to design a memorial on that plot of land. His winning bid was one of the highlights of his life. Just before the blessing of the ground, he walked through the desert for several miles, alongside clergy and thousands of others, to have a greater understanding of what their relatives had faced.  Like many Armenians, Balmanoukian has his own family history of the genocide, having lost his grandfather and his aunt, who was just 8 years old at the time.

Balmanoukian was initially worried the Syrian government wouldn’t allow the chapel to be built, but his fears were unfounded. After its completion in 1991, he watched the pilgrims come from Egypt, France, Jordan, Lebanon, the United Kingdom and the United States, wherever people of the far-flung diaspora had settled. But the same religious, political and sectarian divisiveness that led in part to the Armenian Genocide a century ago is still echoing through the region; and with the rise of religious warfare, the memorial once again became a flashpoint, as have other churches and mosques. When Balmanoukian learned of its destruction last September, he looked at the pictures to confirm: much of the chapel’s limestone has been turned into a pile of gray rubble, which had been enclosed by a wall that was tellingly called the Friendship Wall, for the good relationship Armenians have had with Arabs during the genocide, and afterward.

“That memorial was expressing our gratitude to the Syrian Arabs, so why would others come and blow it up?” he asked. “It was written in Arabic about our gratitude toward them. Right now, it’s the foreigners who are responsible for what’s happening in Syria -- not the Syrian people. A lot of the people around here have an Armenian grandmother or grandfather, who were deported here during the genocide.”

In the memorial that day in 2007, I walked down the narrow staircase to the chapel’s lower level. I lit a candle for my grandfather and for all those who had perished, before studying the bones displayed in a glass case, which had been collected from the surrounding areas, where one only had to scrape the surface to discover the fragments of lives cut short.

On Thursday, the Armenian church canonized the genocide’s dead into saints.  It’s the first time in centuries that this was being done, making the ground in Deir Zor and the nearby massacre sites even more sacred for many descendants.

“A lot of people don’t know where their relatives are buried, or where they were killed; this was a collective burial place,” Balmanoukian said. “Whenever people see me now, they ask: Are they going to renovate it? I say let the killing stop, and God willing.”