"Louie," you disappoint me: Yet another bumbling cop stumbles into a smart TV show

Louie is forced to hang out with Lenny, a beat cop his sister used to date, and the shenanigans are so predictable 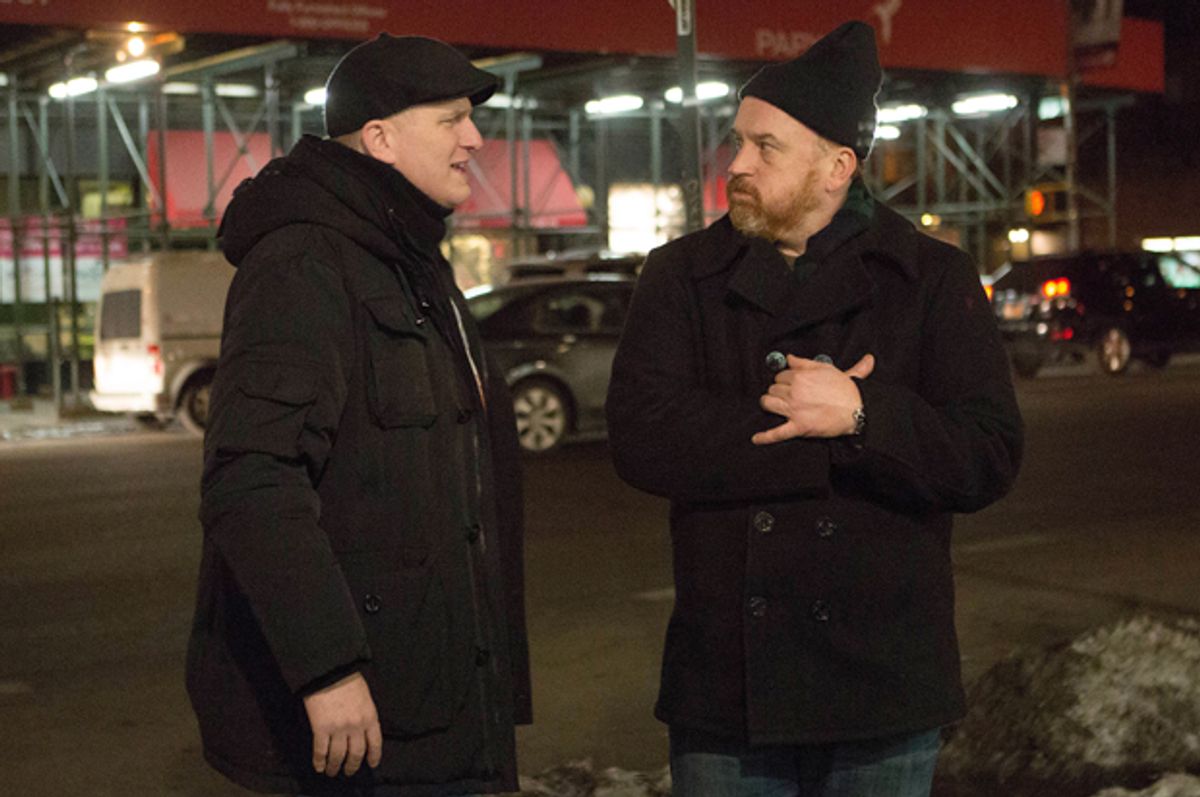 As any television critic will tell you, there are two constants when it comes to televised drama, "cops" and "doctors," and the current moment is no exception. For example, you have a wide selection of police procedurals to choose from: old hats like "Law & Order: Special Victims Unit"; more family-oriented fare like "Blue Bloods"; shows that are only tangentially about cops, but are still police procedurals, like "Elementary" or "Person of Interest" or "Bones"; and you even have comedies that work within the trappings of the police procedural, like "Brooklyn 99."

Except none of those are actually "cop shows," because they're all about detectives. (Which is, yes, technically a rank, but is conventionally depicted as entirely different profession.) In fact, the majority of shows aren't about cops at all -- they're about individuals too intelligent or talented to be lowly patrol officers, who have transcended the beat and work in the rarefied world of investigation. That is not to say that uniformed officers don't make an appearance on these series, because they do, but when they're not relegated to bit players at crime scenes -- the blue drones in the background collecting evidence or being asked to canvas a neighborhood -- they're inevitably fucking up.

This dynamic was neatly encapsulated on a recent episode of "Elementary" -- CBS' loose adaptation of Arthur Conan Doyle's Sherlock Holmes-- in which Joan Watson (Lucy Liu) is asked by the daughter of the New York Police Department's Captain Thomas Gregson (Aidan Quinn) to assist her in breaking up a ring of thieves hitting up local drug stores. Hannah Gregson (Liza Bennett) is just a lowly uniformed officer, so she seeks out Watson's help -- and Watson isn't even an actual detective, she's an assistant "consulting detective" -- in order to discover the identity of the thieves, a problem that's been vexing Officer Gregson for weeks.

Two scenes later, Watson has not only discovered who the thieves are, but how to use them to infiltrate a much larger prescription drug smuggling operation. She hands Officer Gregson a file containing everything she needs to initiate what could be a career-making bust, and what does the beat cop do? She immediately arrests the low-level operators, thereby allowing those running the criminal enterprise to go to ground. Why does she do this? According to her own father, Captain Gregson, it's because she's not that bright -- she settled for the small score because her beat-cop-brain isn't capable of conceptualizing the abstract connections required to take down a smuggling ring.

"She is what she is," Captain Gregson tells Watson. "I love her, but I love this job too, the people who can actually do it." And on that note, the episode fades to black, as if it's a fact of precinct life that current uniformed officers just don't have what it takes to make detective. There is a reason that television prefers its "cop shows" to follow detectives, and that's because there's an inherent narrative to the life of a detective, especially when they work in homicide -- a life is taken, an investigation into who took that life ensues, discoveries of varying relevance are made and, if everything works out, a criminal or criminals with their own tales to tell is sussed out.

The life of a uniformed officer lacks that inherent narrative, comprised as it is by activities best summed up by the word that so often sums them up on television: "beat." They have their "beat," the areas they patrol daily, possessing of a steady rhythm that isn't percussive so much as draining, forced as they are to watch the same people make the same mistakes over and over again. By necessity, a television show about the life of uniformed officers wouldn't be structured like a novel so much as a sociological treatise -- which isn't to say that wouldn't make for an interesting series, only that it wouldn't make for a popular one. Just ask David Simon.

All of which is why when I learned that last night's "Louie" would feature Michael Rapaport playing "Lenny," a beat cop who used to date Louie's sister, I thought there was a possibility that a uniformed officer would get the kind of treatment a blue collar, working class person deserves. "Louie," after all, is a show that extols the ordinary dignity of flawed individuals, and while I believe that Louis C.K. attempted to do something like that here, in the end the character of Lenny differs little from his brethren in blue on other series.

Lenny is a bully of long-standing who has, as the scene of him and Louie at the bar revels, swallowed the red pill. "The thing about guys like you and me," he tells Louie, "we're being selected out, like we don't even matter anymore, because they're the ones with the pussies, so they get to decide who gets married, who has a girlfriend." And as if that doesn't make him despicable enough, he begins to light into Louie, telling him how pissed he gets that someone "below average, got no kind of face and all, are you're fat" -- all of which is true enough, not to mention charming when it's Louie who's cataloging his failures. But it gets even worse when, after they've left the bar, Lenny reveals that he's lost his service weapon at some point during the evening.

To recount: Lenny isn't just a misogynistic asshole, he's a cop who's so cavalier with his weapon that he can lose it for hours and not even notice. When the pair return to Louie's apartment, where their night began, to see if perhaps Lenny misplaced it after he'd jokingly drawn it on Louie earlier, he has a complete breakdown, balling up in a chair and berating his own stupidity. The fact that Louie leaves the apartment and finds the gun lying beneath a tree that Lenny attempted to dunk an imaginary basketball on only makes his plight more pathetic, because at the time he'd been imagining the life he could have led had his basketball career not ended when his days in high school did.

I'm not making a pitch for a show that lionizes the inherent goodness of a group of uniformed officers -- why would I? I don't even watch ABC Family -- but I do think it's possible that the perception of beat cops in popular culture has been severely skewed generations of television series that have portrayed them as idiots too stupid to ever earn a shield. Medical dramas have had no difficulty imparting gravitas into the tribulations of nurses, the working class equivalents of doctors, after all. No one watched "ER," saw a nurse struggling to resuscitate a patient and thought, "If only she weren't so stupid she'd be a doctor already and could save that person's life."

But the beat cop doesn't merit the benefit of that doubt -- at least not on television, not even the best of it.