Monty Python reunites at Tribeca: "We are funnier than Scientology... we could be a religion" 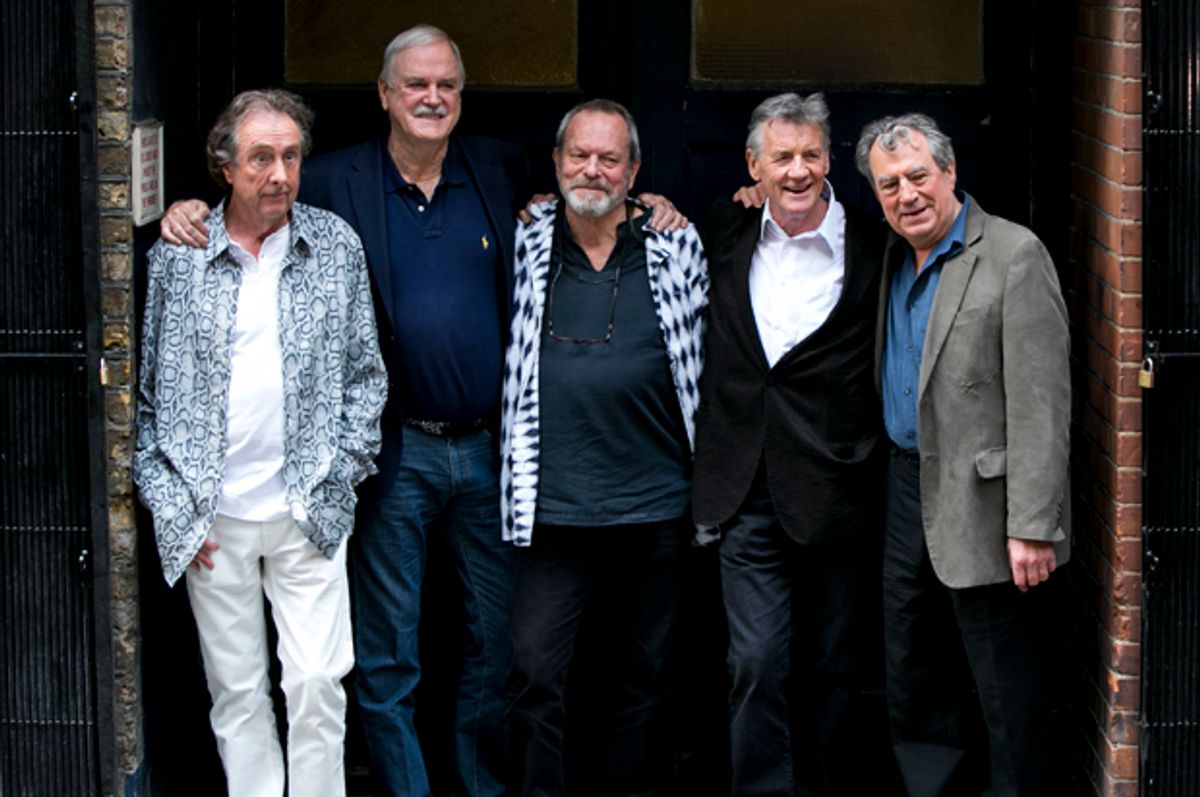 Today, the five living members of Monty Python — Terry Gilliam, Terry Jones, Michael Palin, John Cleese and Eric Idle — reunited at the Tribeca Film Festival for a 40th anniversary celebration celebrating the legendary British comedy troupe. Over the course of Tribeca’s closing weekend, there will be special screenings of  their films "The Meaning of Life," "The Life of Brian" and "Monty Python and the Holy Grail," as well as showings of the new documentary the "Meaning of Live," about the live stage shows they put on at London’s O2 arena last year.

The gang was in great spirits at their first press conference today, reminiscing fondly about the past in-between teasing one another and doing bits (after coming out, Michael Palin dramatically toppled onto the ground, after which he got up and sat cozily on John Cleese's lap). As Eric Idle put it: “It's really fun to see everyone. To go through your life and then get together for weird reasons with people you've known for over 50 years is really just a lovely thing.”

Here are ten other interesting tidbits from the Q&A:

Eric Idle: "Comedy is a theorem. You write it and you think, in theory, if I say this like that and I wear this … the result will be laugher. So it's a theorem and you actually prove it. And that's the nice thing about comedy, you dont go: 'Oh I wonder why that worked.' They either laugh or they don't."

2. Remembering their first ever screening of "Monty Python and the Holy Grail" in New York:

Idle: “They paid two guys, two actors out of work, dressed them in Arthurian robes and had them running up and down Fifth Avenue dragging coconuts behind. And they had signs that said "Monty Python and the Holy Grail", free coconuts for the first thousand guests who show up to the screening at 11 a.m. at Cinema 2. And we were woken at 8, and they were saying 'you've got to get up!' And we said 'what do you mean?' And they said, 'well, there's 2,000 people surrounding Cinema 2 waiting for free coconuts.'"

3. On whether Spam is still funny

Idle: "Spam is still funny, but only if you eat it."

4. On working as a team and the different styles within the group

John Cleese: “[Palin and Jones] were more interested in flow and all that, and I was interested in writing funny sketches. That's what makes a team work. People always forget that the team works best when people do completely different things and have different strengths and weaknesses and that's, I think, why we work well."

5. On rumors in the press that they don't get along

Terry Jones: “We love each other.”
Michael Palin: "I think they underestimate how much we hate each other."
Cleese: “You have to understand the British Press write this stuff about everyone, not just about us. I think places like the Daily Mail, which is my pet hate, operate by trying to make people anxious and slightly depressed … they ran a story a few months ago, Michael and I ran into each other at the same restaurant by accident and we were sitting at different tables and I sent Michael half a bottle of sparkling mineral water and he sent me an ashtray."
Palin: "No, I sent you the salt."
Cleese: "And some paper -- it wasn't the Mail, believe it or not -- wrote about it to show how competitive the two of us are."
Idle: “I love these things where we get together, because it’s just fun. I hate to say it — and I hope the Daily Mail isn't here — but it's really fun to see everyone. To go through your life and then get together for weird reasons with people you've known for over 50 years is really just a lovely thing. It's a very delightful thing. We’re very lucky."

Idle: “SNL has been this university of comedy for 40 years. They’re amazing. The best training there can be is just to be out there live every Saturday just doing wrong material [laughs]. But just look at the alumnae from that — and what's interesting about America is in the last decade, all of your news is funny now. People only get it from Jon Stewart or Colbert. What are you going to do now that they've gone, just when the Republicans are coming back. Is this a good idea? You might have another Bush!"

Cleese: "If you're asking about comedy now, I don't begin to understand contemporary society. Nobody's yet been able to explain Facebook to me. I just don't know why anybody would do it, and that's quite scary because you've got to be in some sort of touch with your audience, and if you just don't understand why they want to watch movies, where the director and photographer have spent ages setting up the beautiful shot, and then they watch it on these [tiny screens], if you don't understand your audience, the best thing you can do is to get out.”

7. On making fun of religion in "Life of Brian," and why they couldn't do it today:

Cleese: "It really just changes things now, because back then there were fundamentalists in the South who killed people in connection with abortion clinics, but it wasn't something that ever threatened us, [our] actual physical safety. And now that is, to some extent, something you have to think about."
Palin: "If we wrote another one — would we write another one? I think we’ve said pretty much what we wanted to say about religion, and that applies not just to that period, but anybody who follows leaders without thinking, and saying we’re going to go with them just because they have the slipper or whatever."
Idle: "But I think we should now apply for tax-deductible status on the grounds that we are funnier than Scientology … we could be a religion. Briantology."

8. On which of their rockstar friends is the funniest:

All in unison: "George [Harrison]."
Idle: "But all the Beatles were funny, that’s why they were successful in America. Ringo was the funniest person I think they'd ever seen on television. His funny nose, his funny hair. Everyone knew his name first. Because they were so funny at the airport, that I think the comedy was what got them into America initially."
Palin: "Even when George was asked why he'd given 5 mil or whatever it was for 'Life of Brian,' he said 'well, you know, I just want to see it.' Only a Beatle can do that."
Idle: "But all rock and roll people are pretty funny, the Stones are pretty funny. And they spend so long on the road they watch every single comedy thing that exists."

9. They agree that their most Python-esque sketch is the fish slapping song:

Palin: “It’s just short and can’t be deconstructed.”
Idle: “We all chose that. When we all had to do our 'best ofs' we all chose the fish slapping dance, that was the only one that overlapped in our best ofs, actually. It's quite interesting. But I think Python is portmanteau humor. Everyone was writing different types of humor, but you don't notice that when you're watching the show that theres a new writer on, you just see the same guy. So we’re always taking credit for all their hard work, which is nice.

Palin: "I think they're kind of modern characters dressed up as historical characters. There's a great historical believability about it. It's very well put together in the art department and it really does look very believable all dirty and medieval, yet all the characters are present day characters in some shape or form."
Terry Gilliam: "The key for us was to ground this very material in real mud, in the reality of the whole thing, and it made it funnier. It's funny when you have them going 'oh, how do you know he's a king?' 'Because he's not covered in shit.' But you needed the shit to make the joke really work."
Cleese: "Actually, the one thing I’ve never understood is that 'Grail' is always the movie that Americans seem to like the best, but in England they like 'Life of Brian.' That's odd, I don't understand why."
Palin: "Is that because large parts of America don’t show 'The Life of Brian?'"
Idle: "There’s a sort of innocence about 'The Holy Grail.' That’s the thing about remaking it, it’s a bit like 'Hard Days Night' — you have young people who don't know what they’re doing, but they’re doing it very positively and powerfully anyway…it has a lot of charm to it for that reason."