We must disband the police: Body cameras aren't enough -- only radical change will stop cops who kill

The courts, the media, and the political system are designed to back killer cops. Only radical change will work 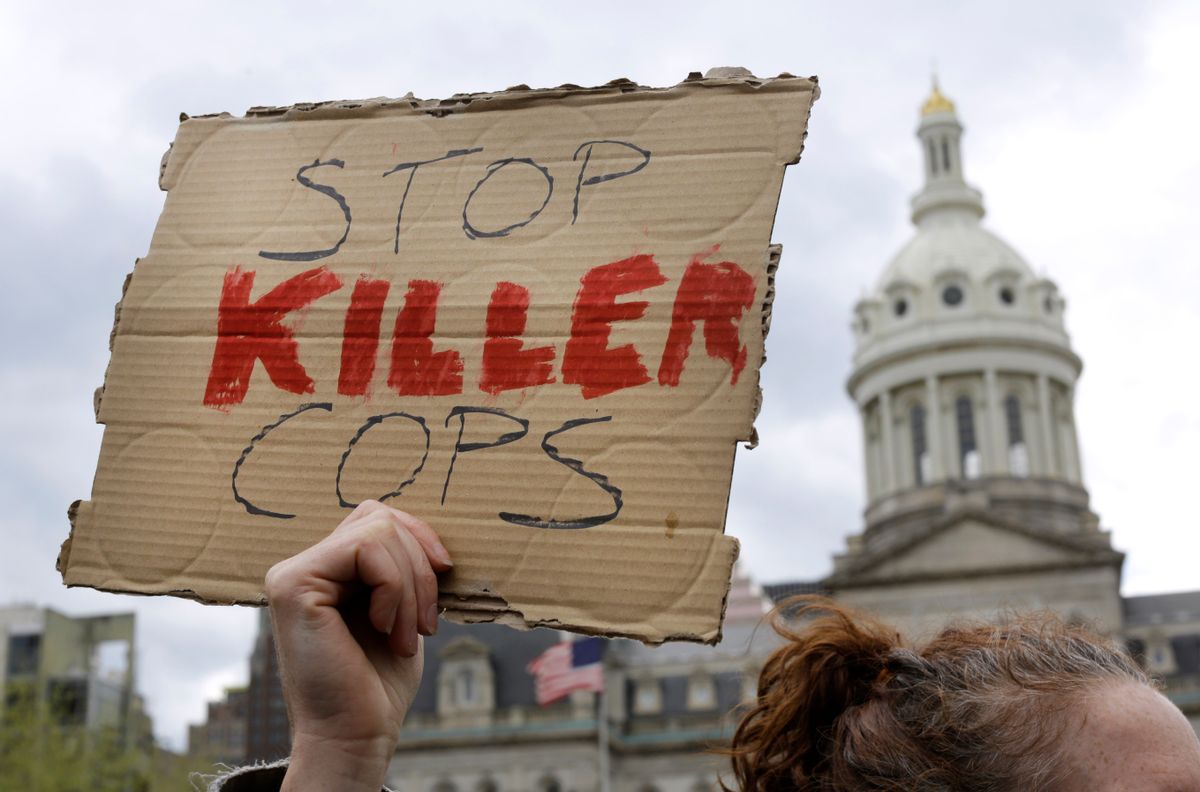 After Michael Slager gunned down Walter Scott in a North Charleston park, a deafening chorus of voices has emerged, insisting that “the system worked.” And they are right. The system did work, just not in the way that they mean.

The system didn’t only begin to work when the video of the shooting emerged days later: it went into motion immediately. The system began to work when Slager cuffed a dying man and then ran (ran!) back to grab his alibi, the Taser he would then plant near Scott’s failing body (as some have noticed, Slager did so in an eminently practiced way).

The machinery continued to whirr smoothly as the second officer on the scene—Clarence Habersham, who is Black—ignored the planted evidence, raised no questions, and did not administer CPR. Habersham insisted that he immediately applied pressure to Scott’s wounds, but recently synched audio suggests that he was instead counting the bullet holes in a still-dying man. Multiracial policing, after all, is still just policing.

The broader structures of the system began to work immediately, doing what they are designed to do: the North Charleston Police Department immediately parroted Slager’s account in an effort to preemptively exonerate him, calling the killing a “traffic stop gone wrong” and “unfortunate and difficult for everyone.” The media—an essential internal component if the system if ever there was one—immediately ate up a story so thoroughly predigested as to not raise any eyebrows. The police, after all, are to be believed.

Among those who believe that the system works—because they too are an essential part of that system—are groups like Al Sharpton’s National Action Network, whose local representative quickly insisted, “I don’t want to see another Ferguson.” A pitiful and cowering, mealy-mouthed politics motivated not so much by fear of the police as fear of the streets, where they have been outpaced and rendered irrelevant.

The system purred along smoothly when a superior officer briefly interviewed Slager, only to make it clear that he had nothing at all to worry about: “they’re not gonna ask you any kind of questions right now.” The system worked in the sense that it performed the function it was designed to perform: to kill Black people and either justify it, cover it up, or both. This is the system, this has always been the system, and yes: the system worked.

Every system has a glitch, however, and in this case, that glitch was named Feidin Santana. Not only did Santana courageously capture the murder of Walter Scott on video, but he—crucially and revealingly—released the video not to the police, but to Scott’s family. Santana’s immediate orientation toward the police was one of distrust and fear: he knew better than to trust the police with evidence, and he feared for his personal safety. He was justified on both counts.

When Oscar Grant was shot dead on an Oakland transit platform on January 1, 2009—a scene immortalized since in Fruitvale Station—police immediately attempted to confiscate all cellphone video, but a similarly heroic Karina Vargas released her footage to the public, sparking outrage and riots that transformed the city and forced the system to respond. In Philadelphia today, activists and family members continue to demand the release of the footage of the police killing of Brandon Tate-Brown, to no avail. If Santana had taken his video to the police first, there’s no knowing whether it would ever have been released. Santana’s fear, too, seems justified. Ramsey Orta, the man who captured on video the choking death of Eric Garner at the hands of NYPD, has been continuously harassed, including the use of procedural delays to keep him jailed on Rikers Island despite posting bail.

What is important is not that Santana’s video allowed the indictment of Michael Slager for murdering a Black man for the tiniest slight to his fragile cop ego. What is important is that Santana’s video provides the basis to indict the entire system of which Slager was but a small part, and which kicked automatically into motion to legitimize the murder of Walter Scott. But the video could only begin to short-circuit the order of truth determined by police power by escaping police control to begin with.

This is why those who see in the murder of Walter Scott an opportunity to renew calls for mandatory body cameras miss the point spectacularly. It is not video footage per se, but video footage outside police control that has at least some potential to rein in police power. Like dashcams, bodycams can be turned off, covered up, or their footage tampered with or covered up. According to one recent study, “body cams help cops, not the community” in large part because “officers control the on/off switch.” But even those bodycam manufacturers who tout automatic upload to cloud storage are merely attempting to provide a technological fix to the fundamentally political problem of who controls the footage itself.

In fact, oft-cited claims that bodycams reduce police brutality derive from a single study in Rialto, California, but even the co-author of the Rialto study insists that there’s no firm basis for widespread claims about bodycam effectiveness. Others have debunked the weak science of the study, showing moreover that the increased visibility provided nationally by bodycams and dashcams has nevertheless coincided with an increase in police violence, not a decrease. Finally, many fear that a proliferation of bodycams will dramatically increase conviction rates, thereby contributing to an already ballooning system of mass incarceration. We need more glitches in the system—more Feidin Santanas, more Ramsey Ortas—not more bodycams.

But in a system where police are glorified and Black people demonized, even independent video footage is either useless or—refracted through white supremacist courts and juries—transformed alchemically into its opposite. Thus while the stomach-churning footage of Eric Garner’s murder and his last words—“I can’t breathe”—sparked popular resistance nationwide, his killers were neither indicted by a grand jury nor even fired.

In the rare case that police are actually indicted, as famously with the Rodney King beating, existing footage is chopped up, freeze-framed, and scrambled before the eyes of jurors so that, in the words of Patricia Williams, “King’s body helplessly flopping and twitching in response to a rain of blows, became in the freeze-framed version a ‘cocked’ leg, an arm in ‘trigger position,’ a bullet of a body always aimed, poised, and about to fire itself into deadly action.” If and when Michael Slager goes to trial, we should expect nothing less than a similarly brutal farce.

By revealing the underlying functioning of the system, moreover, Santana’s video also revealed the aggressive ambition at the heart of American policing, how it is an expansive force demanding ever more power and autonomy while jealously shielding officers from even the slightest degree of public scrutiny and accountability. Slager’s eventual indictment proves this inversely: he worked in a relatively small department with fewer protections and lacking the intimate relationship with the district attorney enjoyed by larger departments.

Slager’s indictment therefore says little to nothing about police accountability in large departments with powerful unions like the Fraternal Order of Police—which recently deemed those protesting the police killing of Freddie Gray in Baltimore a “lynch mob”—or New York’s ambitious (if bungling) Patrolmen’s Benevolent Association. When the PBA felt threatened by the elected mayor Bill De Blasio late last year, they used the death of two NYPD officers to make a power grab that some called a “blue coup.”

A key pillar of police power is their demand for privacy, enshrined nationwide to the detriment of the public and of the victims of their violence, with several cities and states making it difficult to make public the names of those who kill in the name of the state. California is in many ways at the vanguard of this trend with its Police Bill of Rights, which effectively shields public servants with guns from even the most basic level of public oversight.

And so the murder of Walter Scott shows above all that there is an intrinsic contradiction between democracy—even our very limited democracy—and the police, that the police will take every opportunity to seize more power and evade more responsibility. Even the most basic precepts of the most lukewarm liberal democracy—oversight, transparency, and accountability—are too much for the police. It’s time to choose once and for all between democracy and the police.

In so doing, however, we would not be choosing just any democracy, but something closer to what W.E.B. Du Bois called “abolition-democracy”: the kind of democratic horizon this country hasn’t known since the brief interlude after the Civil War known as Radical Reconstruction, when Black Americans—for the first time, for the only time—governed themselves and others. Since the police in the U.S. were originally slavecatchers, abolition-democracy was a kind of democracy that could only exist without the police, and the result was greater equality for everyone: women and men, Black and white.

Radical Reconstruction was beaten back by white terror, and instead of abolition-democracy, we got the police. As the age of Jim Crow set in and Black Americans moved, in Du Bois’ words, “back toward slavery,” the police and the courts became the most important mechanisms to uphold white supremacy—and nothing has changed. With every move toward freedom, the importance of such legal instruments only increased: it was therefore no surprise that the winning of some limited civil rights in 1964 and 1965 soon coincided with the exponential ballooning of a racialized system of mass incarceration.

This is why today, some are proposing the three D’s: seeking to disempower, disarm, and ultimately disband the police. Ambitious? Yes, but if there were an armed gang wandering the streets with impunity, responsible for thousands of killings over the past ten years, we wouldn’t hesitate to act decisively. Why not do the same with what former New York Mayor Michael Bloomberg once boasted was the city’s “biggest gang”?

Abolishing the police is a daunting task indeed, requiring as it would a total restructuring of socio-political life in a country that has never known anything else. But the very centrality of the police, as a sort of linchpin upholding white supremacy, means that even small steps can unleash radically new possibilities. And practically, the steps are concrete: the abolition of police unions, the main pillar of creeping police power, as well as the derogation of any law that treats police as a special class of people. It begins with breaking police power in the United States once and for all.

George Ciccariello-Maher teaches political theory at Drexel University in Philadelphia, having previously taught at U.C. Berkeley, San Quentin State Prison, and the Venezuelan School of Planning in Caracas. He is the author of We Created Chávez: A People's History of the Venezuelan Revolution, Decolonizing Dialectics, and Building the Commune: Venezuela's Radical Democracy. Follow him on Twitter @ciccmaher.