"A corrupt, unresponsive and plutocratic disaster": How Mitch McConnell and the GOP remade Washington in their image

Now that the GOP's in control, Mitch McConnell is letting some things pass — and taking all the credit 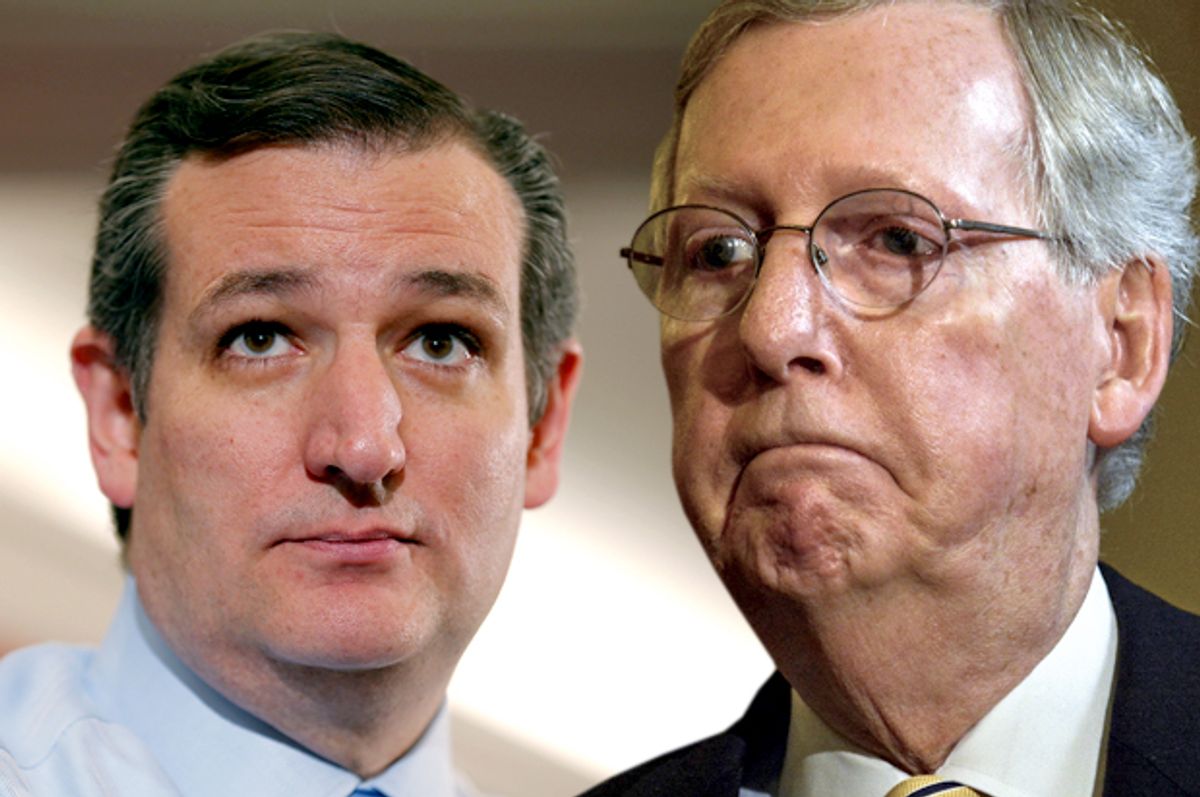 Republican Senate Majority Leader Mitch McConnell is by most accounts an awkward, charmless politician who is motivated by little more than a ruthless desire to accrue power and win his next election. He has no set ideological principles (he was once a labor-friendly, pro-choice moderate, for example) and despite having been in Congress for some three decades, no legislation of real significance bears his name. To all appearances, he is exactly the kind of nakedly ambitious cipher that our society rewards but that we the people claim to hate. I would, generally speaking, rather write about someone else.

But the depressing-yet-undeniable truth is that, besides President Barack Obama and Supreme Court Justice Anthony Kennedy, no individual has made a greater mark on the U.S. government over the last six years than Sen. Mitch McConnell. He is the godfather of the obstruction über alles strategy that the Republican Party implemented — mostly successfully — from 2009 to 2015; and he is the party leader most responsible for the GOP retaking control of the Senate despite refusing to moderate even a tiny bit. And did I mention that he’s a leader of the war on campaign finance regulation, too?

So when the Hill reports, as it did this week, that McConnell’s next goal is to persuade the media and the American people that Congress has been more productive with him running the Senate than it was under the Democrats and Sen. Harry Reid, you should pay attention. And when mainstream, influential and ostensibly left-of-center outlets like Vox report that, after years of dysfunction and gridlock, Washington is finally “working,” you should be concerned. Because there’s an important lesson here — one learned through painful experience — and it’s not the one McConnell (or Vox) thinks.

That lesson, simply put, is as follows: The wheels of government are not once again spinning because McConnell has qualities of leadership and vision that his Democratic predecessor Reid lacked. On the contrary, Washington is working — relatively speaking — because McConnell and his party, which now controls Congress as well as the Supreme Court, is no longer forcing it to stop. And it’s vital we recognize the difference, or the next Democratic administration will be incapacitated by the McConnell strategy just as the current president was.

In fairness, that’s not entirely the truth. There is a scenario wherein the conventional wisdom in Washington, and within the political class more generally, could ignore the true nature of McConnell’s maneuvers without disallowing an effective Democratic president. But it’s one in which that president would have to govern with an agenda much like the one Obama’s pushing today with his focus on the Trans-Pacific Partnership trade deal, a tax holiday for corporations who “onshore” their “offshore” profits, the reauthorization of the failed No Child Left Behind act, and the Medicare “doc fix” that made sure America’s doctors would never have to worry about a pay cut again.

Not a single one of these initiatives, you’ll notice, could be fairly described as progressive. They’re not necessarily conservative, either. What binds them together, instead, is that their strongest supporters are all very wealthy — and most of them are corporate. That’s usually the case with bills that survive today’s Congressional gauntlet; they ignore the people altogether, and are sometimes even against the public interest. Without fail, though, they’re supported by the kind of lobbyists and organizations with so much money (and so few principles) that they’re happy to donate to whomever holds power at the moment. Et voilà! bipartisanship.

But what if the next Democratic president — or the one after, for that matter — looks to Obama’s relatively progressive first two years for inspiration rather than his pro-corporate finish? What if that president is more concerned with adding a robust public option to the Affordable Care Act; or making generous and state-provided parental leave like that found in the rest of the developed world the law of the nation? What if that president wants to take another shot at the Employee Free Choice Act (except this time actually try to pass it)? What if they want to do something really crazy, like hiking taxes on the one percent and raising the floor nationally for wages?

Well, unless our political elite sees that the GOP’s return to power and D.C.’s recent (corporation-friendly) productivity is not a coincidence, there’s no reason to think the terrible dynamic of 2011-2014 won’t come roaring back. So long as the structural flaw of the Constitution that McConnell exploited — the accountability gap between the functioning of the government and the public’s evaluation of the president — is not amended, any president who hopes to do something for the 99 percent without a super-majority in Congress is destined to fail. American government will remain a corrupt, unresponsive and plutocratic disaster.

And that is just the way Ted Cruz-style radicals and Mitch McConnell-style hacks like it.