Bruce Jenner's remarkable authenticity: What he teaches us about life, laughter & vulnerability

A breathtakingly real, earnest interview with Diane Sawyer from a media target and near-Kardashian 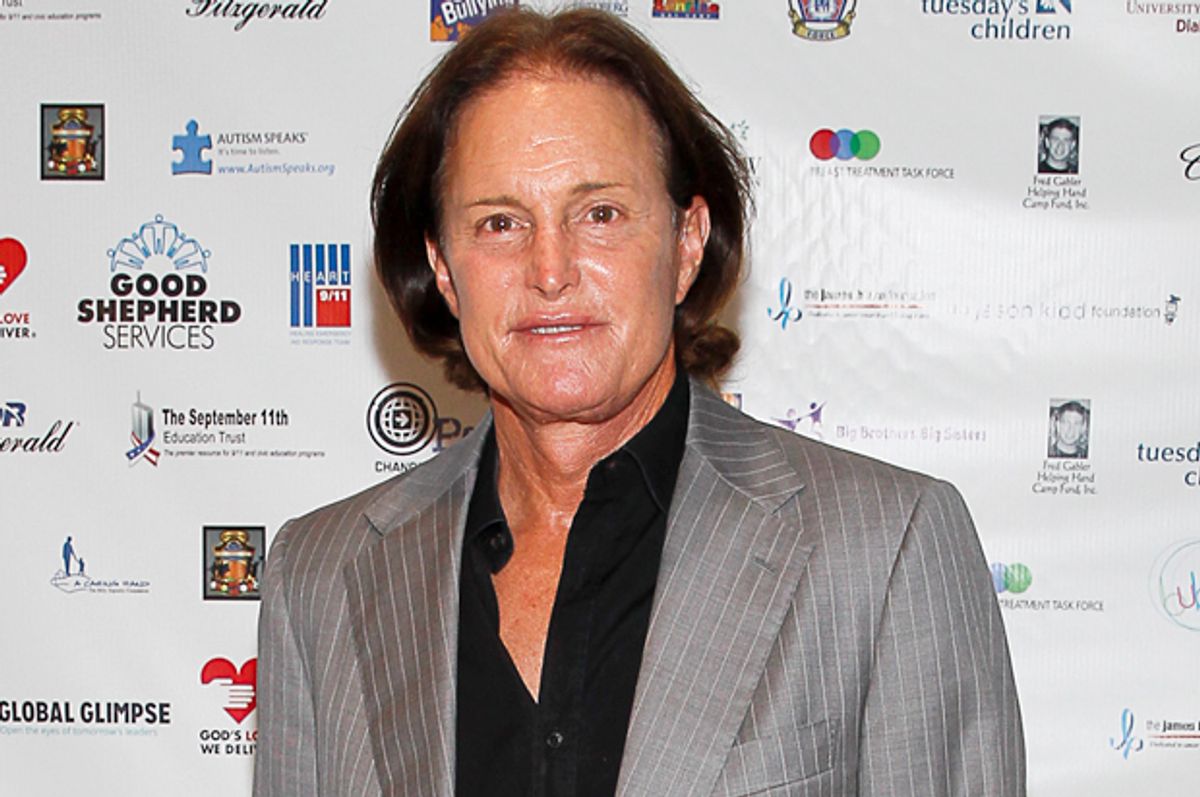 Last night on ABC, Bruce Jenner — the former Olympian now best known as Kim Kardashian’s stepfather — came out, after years of silence, as transgender. Per GLAAD, Jenner is still using male pronouns and going by the first name Bruce. With Sawyer, Jenner referred to the person he is working towards becoming as simply “her,” an unnamed, as yet uninhabited female figure.

For those unfamiliar with Jenner, the pre-taped interview with Diane Sawyer was a crash course in his particular notoriety, and also in the tabloid sensationalism surrounding his evolving public appearance. Jenner wept openly during the interview, which included appearances from several of his children, his sister Pam, and his mother. He went so far as to show Sawyer elements of his new wardrobe, including a sheer black dress, at his home in Malibu.

Jenner himself presented his situation—the non-binary core of his identity, to be exact — with breathtaking candor and vulnerability. He did not beat around the bush; he did not hedge; he did not make excuses. Nor was he defensive, attention-seeking, or self-pitying. Jenner is an idiosyncratic personality, and it showed, but the interview did not read as inauthentic expression or manufactured crisis. Instead it seemed, truly, that Jenner came to a point where he could not lie anymore about his life—and furthermore felt that sharing his story might do some good for the rest of the world. To use the self-empowerment parlance, he had to speak his own truth. To use the narrative expression, he came to his dark night of the soul, and then he found there was only one way out of it. And because he is a public figure, he had the opportunity to do so with Diane Sawyer.

It’s an approach that flies in the face of the reality show that has made his post-Olympic life famous (and, crucially, has paid the bills). E!’s “Keeping Up With The Kardashians” is defined by shameless snark and artifice. Jenner’s interview with ABC News was characterized by earnest, revealing dignity.

This is the interview that will be pointed to as groundbreaking, despite the out-and-proud narratives of trans men and women like Chaz Bono, Janet Mock, and Laverne Cox. Simply put, that is because Bruce Jenner was the very model of all-American masculinity — tall, white, athletically built, family-oriented. He has been featured on Wheaties boxes and the cover of Sports Illustrated as the 1976 gold medalist in the decathalon, bestowing on him the unofficial title of “world’s greatest athlete.” In his post-athletic life he has acquired the glitzy veneer of California living: a permanent tan and a nose job, specifically. For much of America, he is a known quantity — a known quantity now communicating that he is not so known, after all.

Of course, the special has its moments of artifice — its moments of Vaseline-lensed sappiness and Kleenex-dabbing gooeyness that characterize any kind of two-hour pre-taped interview, even with a journalist as storied as Diane Sawyer. But its emotionality existed to create empathy — for Bruce Jenner, yes, but also for anyone who might feel this way about their own gender. His words had the power of testimony, of confessional, of personal essay. He describes his fear of disappointing his children and his surety that his father would be disappointed in him, before saying that he hopes people will come to his story with an “open heart.” Jenner is a person who believes strongly in God, and the language of salvation frequently enters his speech.

The ABC special steered remarkably clear of the tabloid sensationalism that has characterized coverage of Jenner’s speculated transition in the media. Instead, the special served as a fact-finding mission for the layman. Sawyer repeatedly asked Jenner about his sexuality; Jenner just as repeatedly patiently explained the difference between sexuality and gender. To her credit, Sawyer played both good-cop and bad-cop. She asked the blunt questions that the naïve viewer would want to ask, but then finessed them with a broader understanding that indicated her comfort with the topic of gender fluidity. And the special was remarkable for offering blunt facts about the lives of transgender people that otherwise do not make it to mainstream media: Public beatings, ignored violence, teen suicide, and job discrimination.

Kris Jenner and her daughters were notably absent from the special, except in clips from “Keeping Up With The Kardashians” and from various advertisements. Bruce Jenner had anecdotes for all of them—including a particularly lovely one about “Kimberly,” who came around after being convinced by a moving argument from her husband Kanye West. The Kardashians live a life almost entirely in the limelight, and I would imagine that they do not show up for public comment without a lot of behind-the-scenes paperwork (especially as “Keeping Up With The Kardashians” is an E! property, held by NBC Universal, a rival of Disney, which owns ABC). After the special aired—and landed very well with fans on social media—they turned out on Twitter in support. According to the tweets, the family watched the special together.

Still, their absence reads as a bit cold-hearted — Kendall and Kylie Jenner sent a written comment, but Kris, Khloe Kardashian, Kourtney Kardashian, and Kim Kardashian West had nothing to say to ABC News. Jenner’s story as a trans person is complicated by the enormous, highly manufactured phenomenon that is the Kardashian sisters — his youngest daughter Kylie has been in the news this week for inspiring a terrifying, lip-bruising “challenge”—but at the same time, he acknowledges that their success funded his transition and gave him a platform to speak from. (Jenner was in dire financial straits before he married Kris, who turned everything around with her business acumen.) The Jenner story seems to run counter to the Kardashian story—but the main story, above all, is of successfully manipulating public attention. Jenner has been the least good at managing the gaze of the media — until now. As of last night, the silence has been broken. Jenner will the subject of a docuseries this summer on E!, focusing on his transition; after that, the sky is the limit, as this real-life "Transparent" plays out.

Jenner’s journey is far from over. Gender fluidity is still too offensive to many to be treated kindly for much longer; Bill Maher kicked off what is likely to be a long parade of bad jokes at easy targets while the Jenner interview was still airing on ABC. On “Keeping Up With The Kardashians,” Jenner was, in his own words, a “punching bag”; Maher’s cheap cracks are a grim reminder that he played that role for late-night comedy, too. The ABC News interview played a segment of jokes made about Jenner’s transition, almost all hopelessly tired, featuring material from Conan O’Brien, David Letterman, and “Saturday Night Live’s" “Weekend Update.” All worthy comedy institutions, to be sure. But when they were seen in such close proximity to the very real, life-threatening violence suffered by trans people—and the quiet resilience of Jenner, who has endured all of this without making any statement at all until now — it all reads as tasteless, tacky, and cruel. Laughter is a way to stifle vulnerability, but vulnerability is a way to silence laughter, too.