So, that happened: A penis on TV and a surprisingly revolutionary treatment of sexual violence and male entitlement 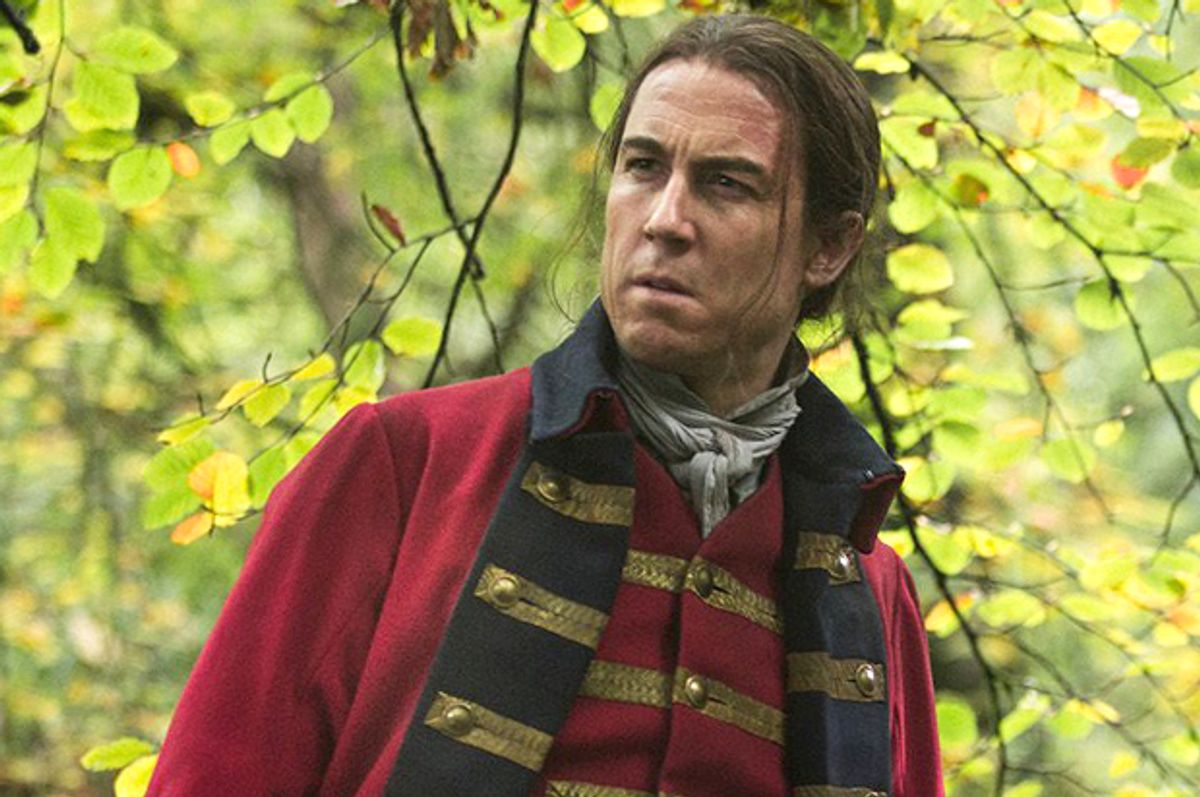 Last night’s episode of “Outlander” features a flashback where a sadist tries to rape a woman but can’t get it up. The audience is treated to a shot of his uncut, un-erect penis as he tries to become aroused; his quote-unquote victim is facing away from him, having been hauled to the bed. He has groped her and beaten her already, and hauled her brother away for trying to stop him from his pleasure. The woman then does something I have never seen before: She turns around and laughs at him, full-throated. He beats her to make her stop. She laughs again. Her eyes drop to his flaccid member, and back up to his face; she continues to revel in her amusement.

In narration, afterwards, the character — Jenny (Laura Donnelly), Jamie Fraser’s sister — admits to being terrified and at her wits’ end, out of every other possible option. The laughter is hysterical, perhaps, or desperate. But not only does she manage to summon up burbling, raucous giggles — it works. Her laughter cuts through the terror of the scene, negating the sexual energy he draws off of her fear. He gets angrier and angrier — and less and less aroused. Ultimately he has to satisfy himself with knocking her out with a particularly heavy blow. She goes on, four years later, to have a husband, a son, a child on the way and a household. She still laughs.

The episode, “Lallybroch,” is not the best episode of “Outlander.” It’s a chapter meant to be a lull in the action, so it’s spliced together with flashbacks and exposition. The show has had trouble finding a way to characterize the rapist, Jack Randall (Tobias Menzies), with anything else than pure sadism — he has threatened, at this point, at least three of the lead characters with rape. And the show’s obsession with sexual assault, though understandable, borders on exploitative.

But that scene is something to write home about; that scene is like nothing else on television. It’s an embodiment of the now rather famous line, possibly apocryphally attributed to Margaret Atwood: “Men are afraid that women will laugh at them. Women are afraid that men will kill them.” Randall’s anger and humiliation at being laughed at is the most characterization he’s gotten on the show — a glimpse into his fractured, violent psyche. Full-frontal male nudity is absent from even the raciest of cable shows — HBO’s “Game of Thrones” has steadfastly avoided it, even as the boob count on that show goes through the roof. And laughter — in the midst of something so awful — it’s an expression of power, a callback to innocent amusement, self-assured expression of mirth. Whether or not the episode or show is perfect, what makes “Outlander” so compelling is that it makes a space for moments like this — stories of sexual assault that give agency to the victims, even when something terrible is about to happen to them. Donnelly and Menzies make the most out of an extremely fraught scene.

“Lallybroch,” written by Anne Kenney, starts and ends with the threat of rape. This episode is the first time the audience meets Jenny, who we have only known up until now as the woman Jamie (Sam Heughan) went to jail for. When Jamie reunites with her after four years apart, he assumes the little boy running around is the product of that awful event — and, naturally, responds in the most reductive, unsympathetic way possible, accusing Jenny of being a “hoor” for Randall. After Jenny relates her story, Jamie reveals to his wife that Randall threatened him with rape, too — instead of a flogging, Randall was willing to violate Jamie in some other way. (Given a devil’s bargain — more choice than any of the women are offered — Jamie opts for the whip.) And the episode ends with all of them at gun- or knifepoint again, with an intruder looking up at Claire, leering at the “bonny lass.”

On the surface, “Outlander” is a kind of tea-cozy fantasy — time travel, marriage to a handsome laird, tartan wool dresses, and wide-angle shots of the emerald-green Scottish moor. It’s a stereotypically feminine fantasy, as suits both the author of the original book (Diana Gabaldon) and her female heroine, Claire Randall/Fraser (Caitriona Balfe in the show) — a nostalgic callback to an idyllic landscape, a constrained role in life, a simpler time.

But the show’s strength is in unraveling that fantasy, to reveal both what is real about it (the handsome guy is a virgin until he marries!) and what is emphatically not: It may be 1743, but it is not a simpler time. In the midst of crackling fires lit in cheerful hearths and men in kilts astride fiery stallions, there is the ever-present threat of danger. And for a woman, the threats are double: not just untreatable illnesses and exposure to the elements, but childbirth that can’t be avoided, a domestic role that can’t be negotiated, and pervasive sexual assault that can’t be prosecuted.

“Outlander,” on par with a science-fiction show like “Orphan Black,” has become a show that is about women’s bodies — the struggle for the women involved to have ownership over themselves, when the handsome laird proves tiresome and the tartan wool dresses, suffocating. For example: In last week’s episode, “The Devil’s Mark,” the show used the framework of a witch trial to punish two too-independent women — imprisoning the women and then putting them in the defendants’ booth, their bodies against the teeming mass of enraged townspeople. To the crowd, Geillis and Claire are bodies with uncooperative personalities housed inside. When they’re sentenced to death, they’re stripped and carried off, bodily, to be burned at the stake. Claire’s friend Geillis (Lotte Verbeek) ends up saving Claire’s life by showing the mob the only thing that they would believe: “the devil’s mark,” really a scar left from a smallpox vaccine. The mark, to the crowd, is a physical mark of ownership on a body that by rights belongs to them, the agents of the status quo; Geillis is mobbed to her death, guilty of having a female body.

But the story’s constant, prevalent threat to female bodies is rape — an act believed by many men to be their right; an act opposed by other men not because it’s a violation of a person but because it’s a violation of property. Claire’s life in 1743 is defined by running from assault to havens where she is protected from it — and ultimately, the best protection for her is marriage, where she can belong to someone else. Even within that marriage, Claire has to struggle for the right to her body — I spoke to Balfe and Heughan earlier this month about an extraordinary scene where Jamie takes it upon himself to spank Claire.

It raises the question of who all of this violence serves. Is it titillation? Exploitation? Torture porn? A how-to guide, for either rapists or their potential victims? I’m not sure if I know the answer. My inclination has been to be amazed at the show’s daring, at its willingness to articulate what that oft-used term “rape culture” really means, and to tell the stories of women and men trapped in the roles of victimhood. The world of 1743 was built on the assumption that women weren’t equal to men (and that Scots weren’t equal to the English, which is the other thread of oppression running through the show). That world’s governing apparatuses — social, political, economic — were built to justify violating a woman’s right to her body, whether that was through rape, death, or as Lili Loofbourow observed, pregnancy. Claire came from 1945, a very different era; we’re watching from 2015, an even more different time. And yet those apparatuses are still there, still recognizable, albeit in different and sometimes weaker forms. And the storied tradition of victimizing the innocent is not going anywhere. The episode asks: What does it mean to still be facing these things? But also, more crucially: What does it mean to laugh in the face of them?