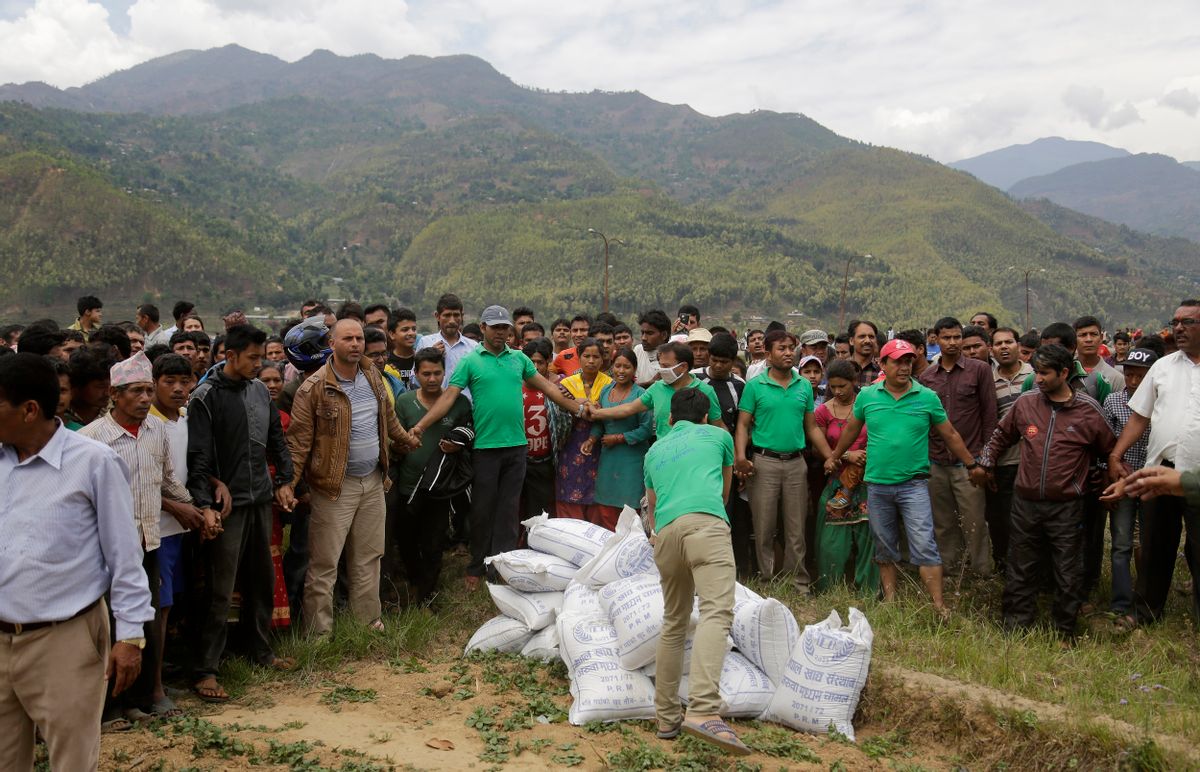 Nepalese volunteers unload relief material brought in an Indian air force helicopter for victims of Saturdays earthquake at Trishuli Bazar in Nepal, Monday, April 27, 2015. The death toll from Nepal's earthquake is expected to rise depended largely on the condition of vulnerable mountain villages that rescue workers were still struggling to reach two days after the disaster. (AP Photo/Altaf Qadri) (AP)
--

1. WHY DEATH TOLL IS EXPECTED TO RISE IN NEPAL

The condition of vulnerable mountain villages that rescue workers are still struggling to reach two days after the earthquake could raise the casualty count of 3,700.

2. HOW LOVED ONES ARE REACHING OUT

Nepalese expats are trying to reach trapped victims through global messaging apps, Facebook and their cellphones.

The long-awaited trial of James Holmes, the man who killed 12 people at a packed Batman movie premiere, gets underway with opening statements.

Thousands of people, including an Obama aide, are attending services of a man who died after sustaining serious spinal injuries in the custody of Baltimore police.

5. WHY POLAND WILL NOT LET RUSSIAN BIKERS IN

The motorcycle group is trying to follow a path commemorating the Red Army victory's over Nazi Germany, but Polish officials say their presence is a provocation.

6. MYSTERY DEEPENS ABOUT SHOOTING AT PENITENTIARY

AP's Ken Ritter finds that a tough Nevada prison was not forthcoming when it declared an inmate guilty of murder in a brawl with a fellow prisoner.

Registers that once rang up tabs and stored cash have evolved into hubs that can collect enormous volumes of data and carry out many tasks.

Lawyers for the Boston Marathon bomber return to federal court to make their case that he should be spared the death penalty.

9. WHO IS REACTING TO BRUCE JENNER'S TRANSITION

Kim Kardashian says her stepfather, by going public, has found "inner peace and just pure happiness", though she admits the family is still adjusting to the news.

10. WHO WON BIG AT DAYTIME EMMYS

"General Hospital" and "The Young and the Restless" were the top winners with three trophies each, while the latter shared the best drama series with "Days of Our Lives."