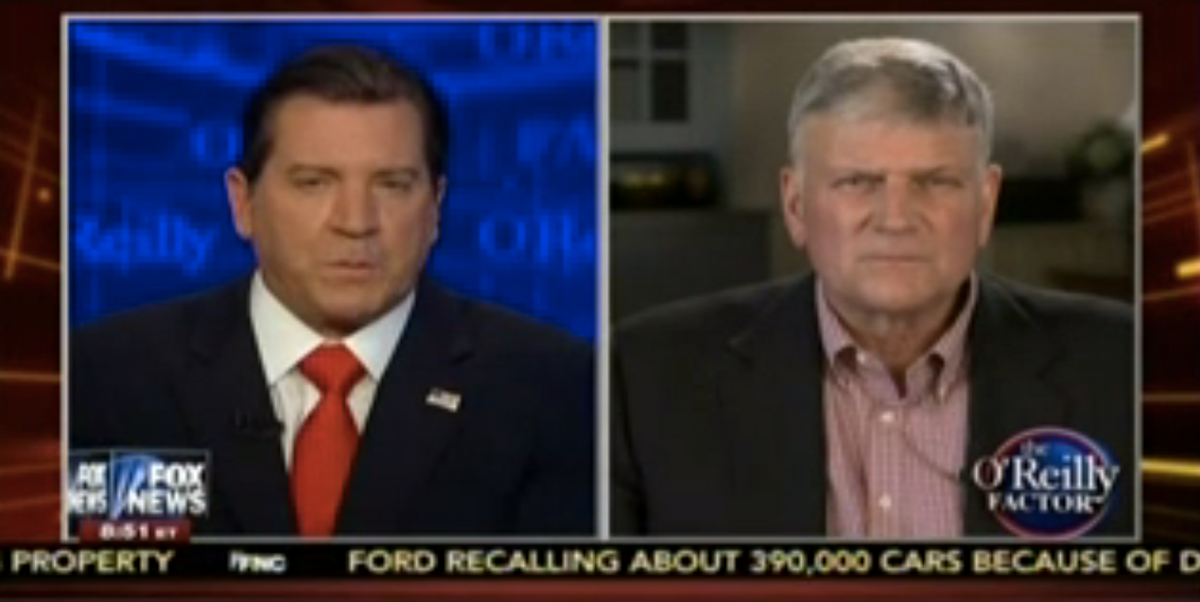 1. Franklin Graham: Don’t persecute Christians. Save that for Muslims.

Franklin Graham visited Fox’s Eric Bolling for a little Obama-hating, Muslim-bashing and general over-the-top fearmongering session this week. The president, they lamented, is being silent on the persecution of Christians everywhere. They were picking up on a theme espoused by Bill O’Reilly last week, and well, every week—the War on Christians and how our secretly Muslim commander-in-chief is A-OK with that.

“Why is Obama so silent on all the atrocities going on against Christians around the world?” Bolling asked Rev. Graham.

Graham said he could not answer the question, and then answered the question by pointing out that Obama is a Muslim.

"His father was a Muslim. His stepfather was a Muslim, he went to Muslim schools growing up, his impressions as a young man came from Islam, not the Christian faith," Graham said. “That might have something to do with it, I don’t know.”

The mess in Iraq? All Obama’s fault. Bolling and Graham (two former military commanders, after all) know for a fact that Obama pulled troops out of Iraq too early.

But back to that Muslim-bashing thing.

Muslims are bad everywhere, according to Graham, but especially here. We need to get rid of them. “We have to be careful of the Muslims in this country. We need to stop the immigration... of Muslims coming to this country from countries that have active terrorist cells."

He’s really got that Christ-like behavior down pat, doesn’t he?

Former House Majority Leader Tom DeLay keeps forgetting who wrote the Constitution.  He seems to think it was some guy named God.

He was appearing on John Hagee Ministries’ Global Evangelism Television network on Wednesday, when host Matt Hagee asked the Texas Republican where the country had gone wrong. Talk about the assumed close.

“I think we got off the track when we allowed our government to become a secular government,” DeLay explained.

So more or less at the very beginning, with that whole church-and-state separation thing.

“When we stopped realizing that God created this nation, that he wrote the Constitution, that it’s based on biblical principles.”

Wait, do the Founding Fathers know that God wrote the Constitution?

“And we allowed those who don’t believe in those things to keep pushing us away, and pushing us not to be unashamedly followers of Jesus Christ.”

DeLay also told a wonderful story about how, as Majority Leader, he once closed the Capitol rotunda for three hours, so that members of the House and Senate could get “on our knees seeking the face of God and praying.”

He said this as if it were a good thing.

Megyn Kelly is one tough cookie. One group she likes talking tough to are those really powerful college students, particularly those who claim that campus rape is such a big problem. She also does not like the fact that college students sometimes protest speakers who they don’t like.

Christina Hoff Sommers, the conservative writer who bills herself as the "Factual Feminist” and thinks campus rape has been over-hyped, has been the subject of some of those protests lately, so Kelly invited her on the show to complain about those college students.

The two made a lot of fun of “trigger warnings” and “safe rooms” that have been set up on campuses in response to Sommers being invited to speak there. Sommers is shocked, shocked I tell you, that these students are stifling free speech on campus. Maybe she has a point.

Kelly spoke freely about how college students need to toughen up and deal with the real-world fact that they are going to meet people who don’t agree with them. “We are ruining the upcoming generation,” Kelly lamented.

This made us think of all the times she has had people on her show she disagrees with, except we could not think of any of those times.

She concluded by quoting a wise old personal trainer she used to have named Dave, who said, "Toughen up, Buttercup!’”

It was law enforcement appreciation day in Harrisburg, Pennsyvania this week. Isn’t that nice? Yeah, but not nice enough, according to State Rep. Dom Costa, who happens to be the former police chief of Pittsburgh. He took the opportunity to announce that he plans to introduce a law against saying mean things to the police.

"This nonsense that is going today on where police officers are being taunted by people and being provoked, let's face it we’re all human beings, and eventually that emotion will break. And that’s what they’re trying to do," he said, according to Raging Chicken Press.

"So, what I’ve talked to some of my colleagues and the senator [Senator Rafferty] is that we have a bill about taunting a police dog. It’s illegal. There should be out that you can’t taunt a police officer because you’re going to get those emotions up. [We] are looking at that bill to put it forward in the House, and I am sure the Senate will follow. Or at least support that bill."

Just one problem with making it a crime to taunt police officers: it’s protected First Amendment speech. Comparing police officers to dogs? Now that is rude.

5. Pat Robertson prays for Jesus to save lesbians and women who do 'filthy' things.

Pat Robertson said a little prayer on the air this week asking Jesus to save women from “lesbianism” and doing “filthy” things with their bodies.

We imagine the doddering televangelist particularly enjoyed saying this prayer because it enabled him to give a little more thought to some of those filthy things women might have done.

His prayer was preceded by the story of one Lisa Kemp, who was molested as a child and turned to drugs and promiscuous sex as a teenager, including the dreaded lesbianism, an automatic barrier to going to heaven.

“When I got around with more of the gay lifestyle then automatically I just thought that I was gay, that I was born like this,” Kemp said. “I was sleeping with everything that moved. I mean, I just became such a terrible person.”

She saw the light in prison, found Jesus, prayed the gay away so she could go to heaven, and hasn’t looked back. A miracle.

You can have a miracle, too. All you have to do is admit that you are “filthy” and that you have misused your body. Easy peasy.