Democrats’ free trade war is getting ugly, and Obama is bending the truth

The president’s pushback implies Elizabeth Warren and TPP critics are either lying or stupid. They’re neither 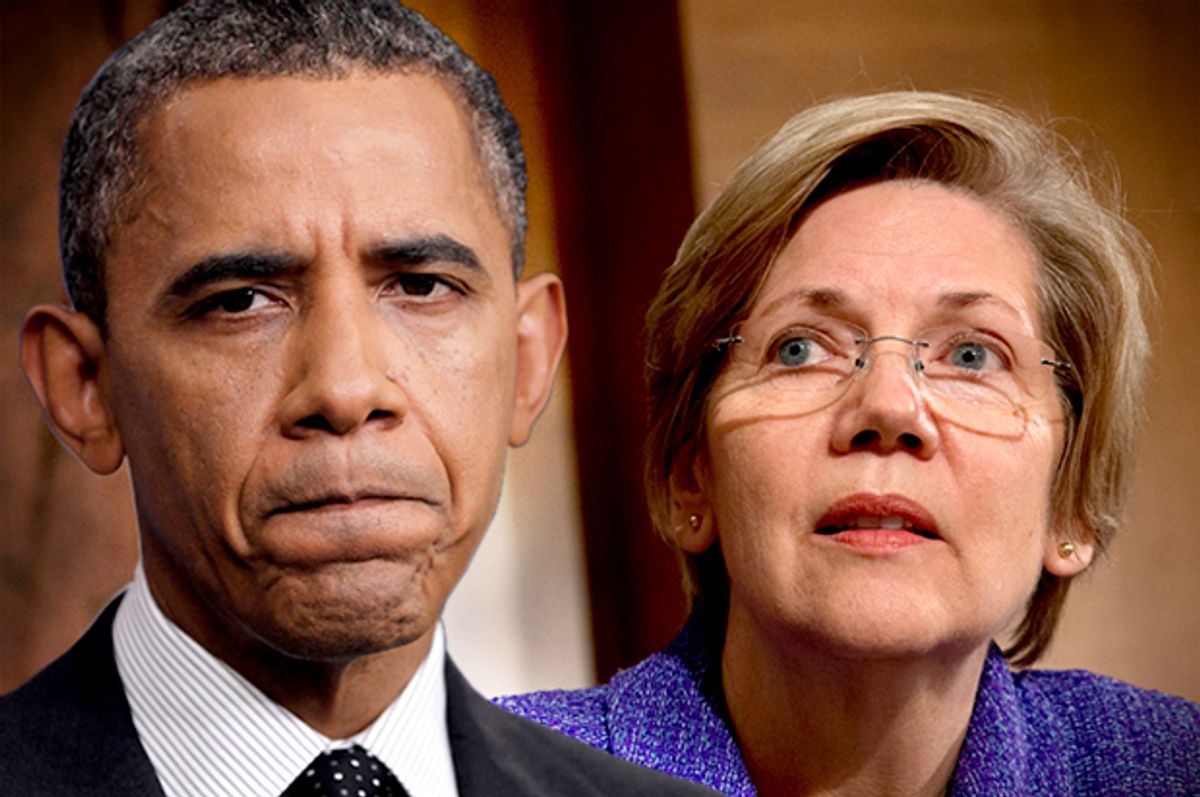 I’m on record declaring that the "split" in the Democratic Party over economic populism has been over-hyped by the media, the GOP and conservative Democrats. Democrats have way more in common, when it comes to addressing growing income inequality and declining social mobility, than differences.

But the divisions over the Trans Pacific Partnership (TPP) are real, and they’re getting ugly. President Obama has apparently decided reasoning and lobbying isn't going to be enough to win over skeptics; he’s lately resorted to personal insults. Telling Chris Matthews Tuesday that “I love Elizabeth [Warren]…but she’s wrong on this” was a big wet kiss, compared to what came later.

On Thursday Obama compared critics of the deal to Sarah Palin and other wingnuts who peddled “death panel” lies about the Affordable Care Act, in a speech to supporters at Organizing For America, the offshoot of his campaign juggernaut Obama For America. He escalated his attacks when he jumped on a conference call with reporters on Friday.

“The one that gets on my nerves the most is the notion that this is a ‘secret’ deal,” Obama said. “Every single one of the critics who I hear saying, ‘this is a secret deal,’ or send out emails to their fundraising base saying they’re working to prevent this secret deal, can walk over today and read the text of the agreement. There’s nothing secret about it.” He singled out “unions” among the wrongheaded critics of his TPP plans.

I confess: I haven't paid close enough attention to the TPP controversy. But when the president started attacking Warren and unions so personally, I got interested. He’s saying they’re either stupid, or lying, or both. It reminded me of the dark days before the 2010 midterm “shellacking,” when Press Secretary Robert Gibbs attacked “the professional left,” and Vice President Joe Biden told progressives to “stop whining.” That didn’t work; the election was a disaster.

The anti-progressive rhetoric is getting uglier – and this time, some of it’s coming from the president. The AFL-CIO’s Thea Lee has worked on global trade issues for 25 years, and “I don’t think I’ve ever seen it quite as bad as this,” she says.

Sure, both sides are using strong rhetoric, but the president’s attack on his critics as “dishonest” would imply that he’s the one telling the truth. In fact, here are three big ways the president is lamentably shading the truth when it comes to TPP.

Secrecy: It’s true that members of Congress can personally “walk over” and “read the text” of the agreement. Alone, without staff, and without taking notes. And they’re prohibited by law from discussing the details with the media or their constituents.  The administration has deemed the negotiations “classified.”

When Rep. Brad Sherman, a TPP critic, told Salon’s David Dayen that’s the only way members of Congress can review the text, it reminded me of the way they can review sensitive intelligence and national security issues they’re overseeing. As a “cleared advisor” to AFL-CIO president Richard Trumka, who sits on a trade advisory panel, Thea Lee was able to read the initial U.S. negotiating position. “But by law, I can’t tell you what was in it,” she explains.

So that’s what Warren means by a “secret deal.” She and Sen. Sherrod Brown wrote to the president this weekend asking that he declassify the latest negotiated text and release it, before demanding a “fast track” vote on the agreement.

Marginalizing opposition as Warren and “the unions.” Warren is joined by Democrats ranging from frequent ally Brown to pro-business voices like Sen. Chuck Schumer to moderate Sen. Bob Casey. While the president hoped to win support from the Congressional Black Caucus, skeptics remain. And yes, labor has been a loud voice against the deal – along with the rest of the Democratic base, and then some.

The coalition opposing TPP includes the National Resources Defense Council, Doctors without Borders, the Electronic Frontier Foundation; critics of certain aspects of the likely deal include New York Times food writer Mark Bittman and the AARP. They are concerned about the way TPP could affect not only manufacturing jobs, but drug prices, intellectual property, environmental regulation and food safety. Obama is facing a remarkably broad-based pushback to his plans, and his effort to isolate Warren and unions is disingenuous.

Denying the vast, pro-corporate power of the “Investor State Dispute Settlement” panel. The wrangling between Warren and the White House over TPP isn’t new. Ever since her March 4 op-ed denouncing the “Investor State Dispute Settlement” provisions of the trade deal, frankly, administration officials have been trying to make Warren look a little batty.

The ISDS process – a private arbitration system that replaces public courtrooms as the venue for conflict  resolution -- is common in trade deals. It began as an effort to protect Western corporations from capricious (and/or populist) governments in developing countries. Warren argued that the ISDS provisions in the TPP “would allow foreign companies to challenge U.S. laws.”  The Obama administration countered by saying that “ISDS does not and cannot require countries to change any law or regulation,” and that the U.S. has never lost an ISDS case anyway.

That’s true, too – if misleading. An adverse ISDS decision doesn’t “require” nations to change laws or regulations; they can pay a steep fine instead. It’s also true the U.S. hasn’t ever lost such a case, but this is the largest trade agreement in history, covering a third of the world’s commerce. That could change.

Just as important, it lets U.S. corporations, and other big multinationals, bully other countries. Famous examples involve tobacco -- American tobacco firms have challenged restrictions on packaging in Australia and Canada – mining and fracking. American progressives care about social justice in other countries, too --  or ought to.

Obama argues that the TPP will have the strongest labor and environmental standards of any trade deal in history. And that’s true, too – but it’s not saying much, given how tilted toward business interests past deals have been. Big questions remain about how enforceable its labor standards, in particular, will be. All of that can be debated once final terms are negotiated and made public, of course – but once final terms are negotiated, the agreement can’t be changed.

The president is again correct when he says there will be time for debate between the final terms of the deal, and Congressional vote to adopt it. There will be time for debate, yes – 60 to 90 days. But at that point, Congress’s only option will be to accept or reject the deal; “fast track” status means it can’t be amended. Given the administration’s hard-sell approach to “fast track,” imagine the pressure Democratic congress members will be under to approve the deal when it’s done, not to scuttle it because of a few unsavory provisions.

So far, though, the pressure hasn’t worked – and now the administration is distorting the truth. The president can do better than this – and he’s likely going to have to. Hillary Clinton shouldn’t take bad advice from the media about arbitrarily “distancing” herself from the Obama administration. But this is a real conflict for the 2016 frontrunner. And on this one, she might have to choose between the president and much of the party base.