"Game of Thrones" recap: "There's no justice in the world — not unless we make it”

What little Jon Snow knows, he learned from Ned Stark; Cersei takes a closer look at the fundamentalist Sparrows 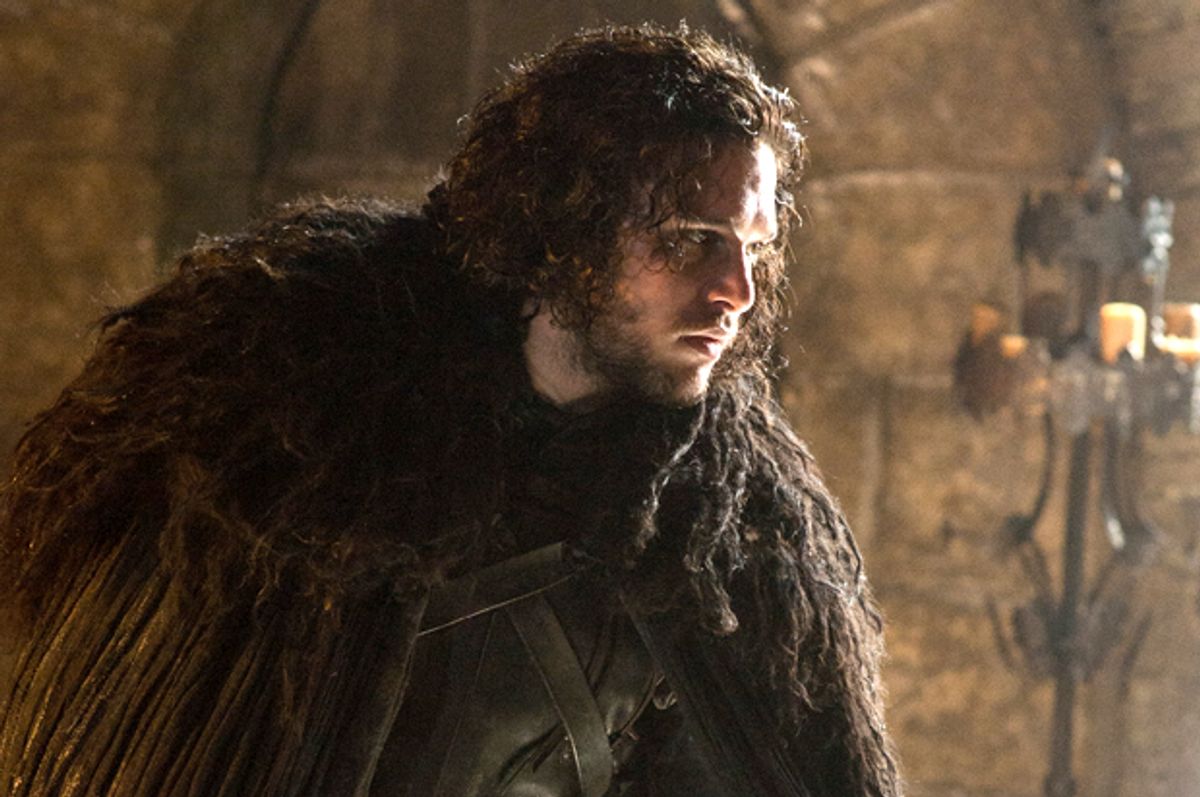 No show on television comes anywhere near the sheer scope of any given episode of “Game of Thrones.” But the enormity of the series’ vision isn’t limited to just its settings or action sequences, but also encompasses the complicated and numerous plots running through every episode. Most shows struggle with maintaining three storylines per episode, yet "Game of Thrones" regularly juggles no less than seven.

The reason “Thrones” succeeds where so many other shows fail is that no matter how disparate the stories, they all carry a sense of heading in the same direction. No matter how tenuous the bonds may grow that link Arya or Jon or any character to the rest of the universe, the series never loses that sense that all of its inhabitants are walking inescapable paths leading them back to some final, all-encompassing conflict. That is, no matter how far flung the protagonists may end up, there’s no denying the sense that, slowly but surely, everyone is coming toward the center of the city. Regardless of whether it takes a few episodes or a season or a combination of both, the collision course has been established and it’s only a matter of time.

One of the techniques the show utilizes to maintain this atmosphere is its use of parallel storytelling. In “High Sparrow,” Jon Snow is settling into his new role as Lord Commander of the Night’s Watch and everything it entails. He gently rejects Stannis’ offer from last week to ride with him in battle in exchange for becoming Jon Stark, telling him that his oath to protect the realm by protecting the wall supersedes anything he may want for himself. Stannis accepts this begrudgingly but Davos stays behind to suggest to Jon that he takes his oath too literally and that perhaps the way he could best protect the kingdom is to help install the rightful king. Snow is unmoved and instead throws himself into refocusing the Night’s Watch, handing out assignments and laying the groundwork for new projects. He runs into trouble, though, when Lord Janos refuses his new assignment at Greyguard, spitting enough vitriol and disrespect at his new Lord Commander to earn a one way trip to the chopping block. Moments before his death, when it becomes clear that Jon Snow is not to be trifled with, Lord Janos breaks down, begging for his life, admitting his fear. Jon is unswayed and executes Lord Janos with his own hand.

The situation is largely identical to the one we saw Daenerys in just last week. Jon and Dany’s journeys throughout the series have often echoed each other, each rising up from less than auspicious beginnings, raised in environments of comfort, yet denied access to the best of what was available, because of their name. (In Dany’s case, the tarnishing of the Targaryen dynasty, in Jon’s the bastard label of Snow.) Both have experienced a meteoric rise to power at a young age and both center their leadership around justice and equality and honor.

But perhaps most telling about the execution story for both Dany and Jon is how similar it is to a seminal moment in “Game of Thrones” very first episode, “Winter is Coming.” In one of the first scenes of the series, we see Ned Stark enact a similar type of justice with a deserter from the Night’s Watch. Ned impresses on each of his boys, who are there to witness the event, the importance of following one’s word and being an honorable man, and it’s a comfort to know that there’s such a good and faithful individual shepherding us through this wayward world. But Ned loses his own head before the season ends — and it was his honor, Stannis pointedly reminds Jon this episode, that cost him his life.

It’s an interesting point overall, as we watch Dany and Jon try to learn how to lead, each attempting to find some balance between honor and control, knowing well that being an honorable person doesn’t generally get you very far in the world of Westeros — not if the fate of Robb, Ca, and Ned Stark are any indication. Is believing in prevailing justice a deadly folly, or can Jon and Dany both subvert the trend?

And as much as storylines running parallel to each other contributes to the show’s atmosphere of unity, perhaps even more influential is the way “Game of Thrones” divides its characters into factions that function as two separate sides of the same coin — a device that “High Sparrow” uses to great effect.

The most obvious illustration comes in how characters are generally left with a single driving purpose that moves them through each day, determined either to avenge the wrongs that have been visited upon them or secure their prospects against those who may seek to avenge against them. Brienne remains focused on avenging the death of Renly at the (ghost) hands of his brother, while Sansa agrees to marry into the Bolton family for a chance to eviscerate them from the inside out for destroying her family, and Jorah suddenly reappears this episode and kidnaps Tyrion from a brothel to (likely) try to make things right with Daenerys. Conversely, Cersei and Margaery are engaged in an epic power struggle over Tommen to try to secure control of the kingdom, while the Boltons are rushing into a marriage to try to secure the North. Meanwhile, Stannis tries to persuade Jon to join his forces to secure the throne. All are single-minded in their pursuits, often to the point of being completely blinded to the consequences.

Maybe an even more subversive example of unity through mirror imagery is the way the show is using manipulation. There are cases like Littlefinger’s influence of Sansa, and even Margaery’s sway of Tommen, that establish themselves as not entirely unlike predatory grooming, isolating an individual and manipulating them until they’re completely under your control. But throughout the show you’ll find similar relationships spring up with Arya and Jaqen H’ghar, or Brienne and Podrick, in which on character will influence the whole of who another person is, grooming and training serving as opposite ends of an identical spectrum.

This is the heart of what drives the sprawling “Game of Thrones” universe, episode after episode, this idea that within every idea or thought or belief, there are two entities struggling for control, identical but for intent. Even down to the gods fighting for control over the souls of each character, the Lord of Light and the Seven. Like every battle waged on the show, it’s unclear who the victor will be, it’s only clear that the endgame will decide nothing and everything.

That’s what makes “Game of Thrones” one of the most incisive and telling shows on television. It understands that the nature of humanity, and any epic story, is contained wholly within the seemingly unrelated pieces strewn about the map and that the only way to have closure is to bring all the elements together to see just how similar their differences make them. Each episode moves us further down the path.

Cersei seems to have decided that it would behoove her to make friends with an extremist religious group, something that promises to pay very interesting dividends over time.

Oh hai, Jorah! This is the first time we’ve seen Jorah Mormont since season four’s “The Mountain and the Viper” when he was dismissed from Dany’s entourage in disgrace. Though he says that he’s taking Tyrion “to the queen” which could mean Cersei, I’d bet that he’s making a beeline to Dany with his catch.

Podrick and Brienne are finally making friends and it is splendid.

The rise of stonehearted Sansa is likely my favorite thing happening in this season and there’s really not enough of it in any given episode.

Arya seems to making some headway at the House of Black and White but needed to throw away her remaining belongings to do so. She, thankfully, tearfully, hid her sword Needle instead of sending it to a watery grave with the rest of her things.

That the brothel Tyrion and Varys visit has a Dany-style prostitute wearing an assless version of her iconic blue dress was brilliant.