Louis Farrakhan, rising: With rap's superstars at his side, the Nation of Islam leader steps forward in the new fight for civil rights 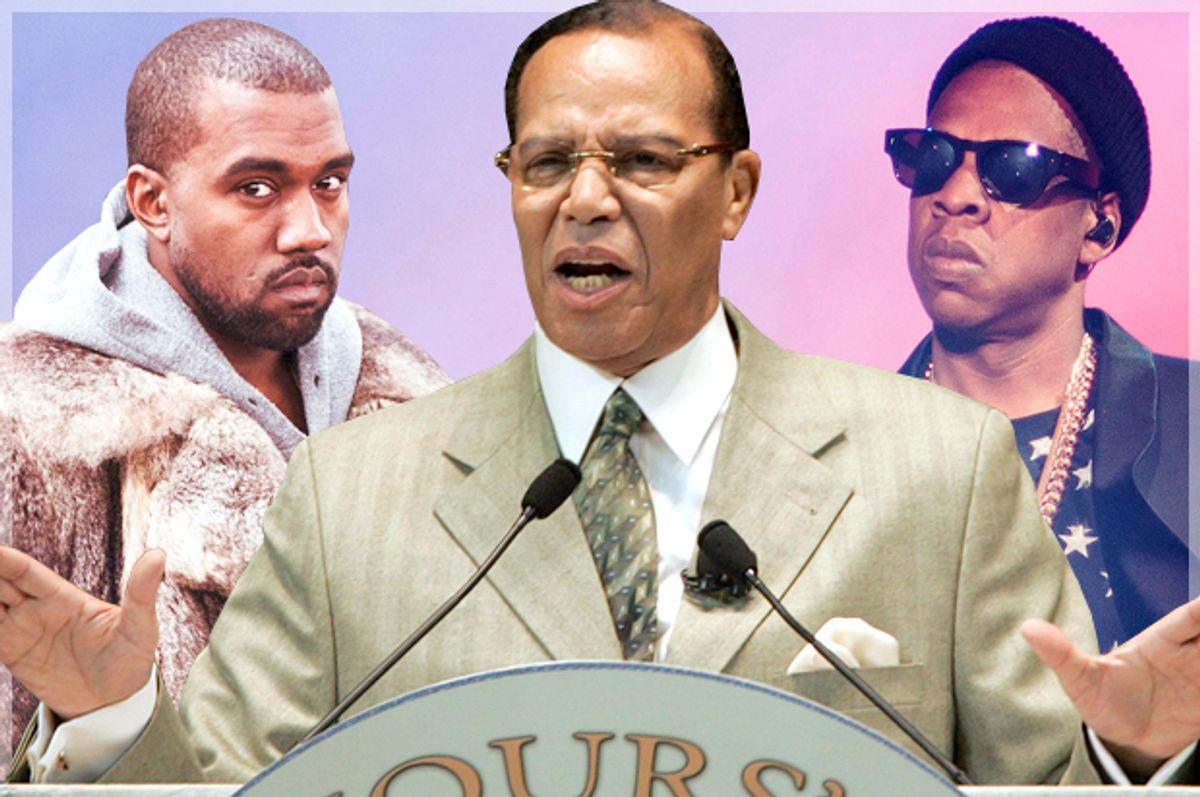 Lord only knows what sort of paranoiac frenzy Glenn Beck would spiral into were he to discover this recent trend in hip-hop: Rappers are increasingly seeking the wisdom and counsel of Minister Louis Farrakhan, leader of the Nation of Islam. And not just the Muslim rappers you’d expect, like Lupe Fiasco or Mos Def; since the beginning of the year, superstar rappers like Kanye West, Young Jeezy and Killer Mike have all met with Farrakhan.

I can see Glenn Beck flying between multiple chalkboards, manically scrawling the connections proving the imminent danger of some coming caliphate. How had we not seen it all along?! ISIS HAS INFILTRATED THE MINDS OF OUR YOUTH THROUGH THEIR HIPPITY HOPPITY!

Beck would be wrong, as usual, to make the ominous links, but the trend does signify something of a shift in attitudes. Black Islam occupies a particular place in the civil rights struggle: Malcolm X’s “by any means” militancy versus Dr. King’s conciliatory nonviolence. The turn toward black Islam might indicate disappointment and an impatience with the lack of progress made during the Obama years.

Kanye West met with Farrakhan in January, bringing wife Kim Kardashian and baby North. The minister and rapper had “a beautiful meeting,” said Farrakhan. The two spoke on the state of rap music in this turbulent time in race relations, and Farrakhan was glad to see rappers “becoming conscious now,” lending their voice to battling injustice. Kanye mentioned the meeting, or perhaps another, on the first single off his upcoming album, referring to Farrakhan as his “sensei.”

Jay Z publicly celebrates black Islam, despite controversially flirting with agnosticism. On his last album, Hov begins the song “Heaven” with a line whose reference likely eluded most listeners: “Arm, Leg, Leg, Arm, Head,” a cryptic naming of Allah used by Five Percenters, an offshoot of the Nation of Islam. Hov has also been seen rocking a chain with a Five Percenter medallion.

Killer Mike, one-half of the critically acclaimed Run the Jewels, met with Farrakhan in January, as well. Like Jay Z, Killer Mike is openly skeptical of organized religion, making each rapper’s  acceptance of black Islam particularly stand out.

Even Young Jeezy met with Farrakhan earlier this month. Jeezy--unlike Hov, Mike and Yeezy--does not often tend toward political or “conscious” rap. Jeezy is more of a trap rapper than the others, but he calls Farrakhan his “mentor” and posted a proud photo on Instagram of his meeting with the minister.

Farrakhan is back. He’s fostered relationships with a number of premier rappers, and seeing something of a power vacuum in black leadership, the controversial cleric is moving in to align a more radical approach to racism. He’s rallying black Americans to be ready for an eventual eruption in the face of police violence in communities of color. “You’ve got to prepare your people for what is coming down!” he screams as he recounts the uprising in Ferguson, Missouri, and what he sees as the failure of black leaders to appropriately respond--to actually change a system under which virtually every black man feels threatened. He indicts Obama and former Attorney General Eric Holder, as well as inveterate civil rights activist Jesse Jackson. Black preachers are called out for being “pacifiers for the white man’s tyranny.”

Farrakhan’s Nation of Islam was credited by protesters on the ground in Baltimore with establishing a gang truce in the city to unify black Baltimore against the police. The NOI and its well-dressed Fruit of Islam were on the ground in Ferguson, as well, in a leadership role.

“This is a new generation and they don’t want to hear your compromising talk!” he screams. What they do want to hear, though, is rap music. Rappers are listened to. Kanye West and Jay Z are listened to. Killer Mike is listened to — he even attended the 2015 White House Correspondents Dinner and was ushered about by none other than Arianna Huffington. Jeezy speaks to a different audience than Mike, even, and so on through the growing list of rappers Farrakhan has met with in recent months.

Speaking at an Atlanta banquet for music and media figures, Farrakhan and Killer Mike shared an emotional exchange in which Farrakhan implored Mike and other rappers to speak truth to power and to use the mic for dissent. “It’s getting to the point that it’s throw-down time,” he warns, “and you are the one to wake your people up and unite them.”

A particularly contentious period of disagreement coincides with the twilight of President Obama’s tenure and the recent emergence of a robust national discourse about police violence against black Americans, structural racism in general, and white privilege. The recent high-profile beef between professors Michael Eric Dyson and Cornel West exposed a rift in the black academy. Dr. West, Tavis Smiley and others parted ways with President Obama fairly early and now criticize the first black president in no uncertain terms. Killer Mike is similarly skeptical of Obama. (Jay Z, on the other hand,  remains in support of the president.)

A radical contingent is emerging, and it appears that Minister Farrakhan is looking to lead a youthful rebellion against what he sees as a dangerously conservative footing. His message is not like the peaceful pleas of Obama and civil rights elders; his anger is more like disciple Killer Mike’s, the rapper who asks on Run the Jewels 2’s most popular song, “When you n****s gon’ unite and kill the police, motherfuckas?” In a sermon earlier this year, Farrakhan announced his challenge to the government, quoting the Quran: “Do you want me...to ask our people to retaliate in ‘matters of the slain,’ a life for a life? Is that what you’re driving us to?!” The congregation of hundreds erupted into a standing ovation.

Farrakhan, 81, is probably not the right person to lead a movement dependent on 20- and 30-something rappers. But his recent reemergence as a venerable leader and teacher does reveal a hunger for radicalism that is not being met by the more placable leadership of Obama and the mainstream elders of the civil rights era. As each new revelation of police violence makes headlines and sends angry Americans into the streets, the chances for moderate leaders to reach the youth seems to diminish. You may have problems with Farrakhan’s violent rhetoric and apocalypticism — it's hard not to, to one degree or another. But his reentry onto the national stage is nothing if not a product of inaction. He goes away when things get better.