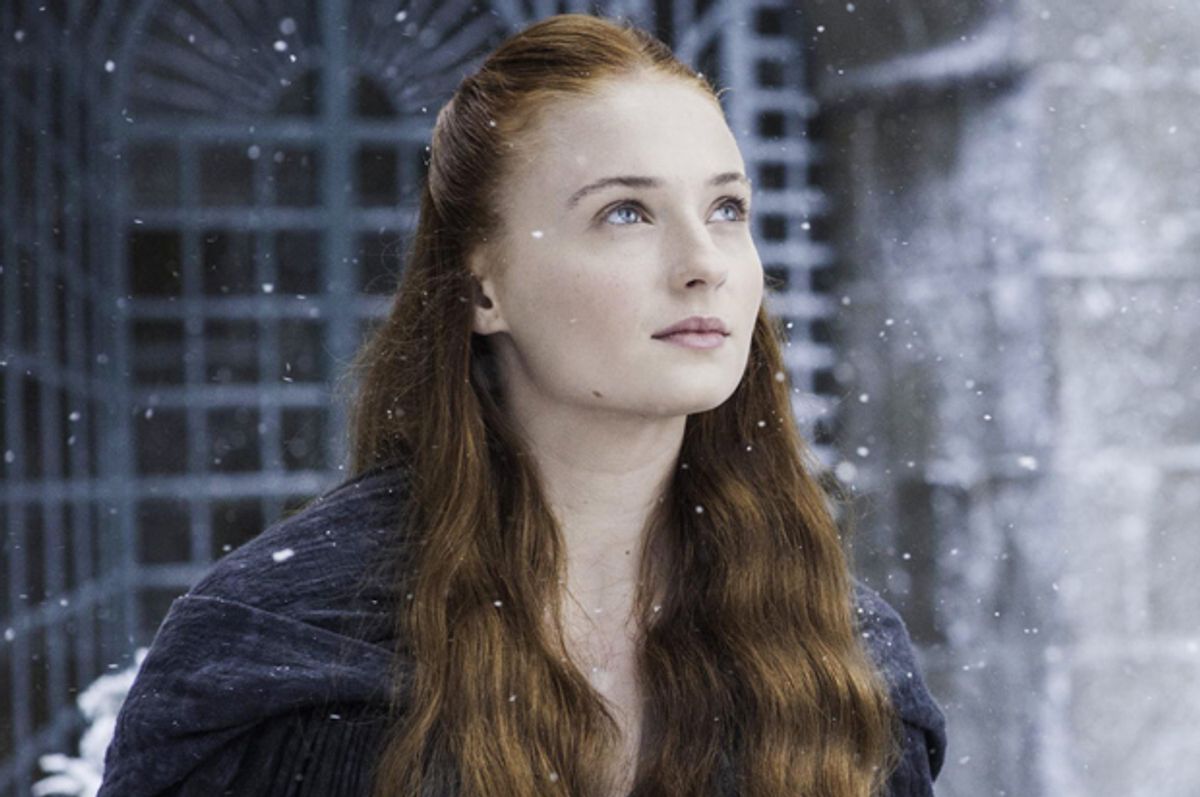 Sophie Turner as Sansa Stark in "Game of Thrones" (HBO)
--

Last night’s “Game Of Thrones” introduces a major deviation from the established storyline of the books, one that careful viewers will have seen in the works since the premiere of this season. Sansa Stark (Sophie Turner) is returning to Winterfell, this time as the bride-to-be of the vicious cretin Ramsay Bolton (Iwan Rheon), a cruel man with a penchant for flaying his victims.

It’s been a long road to this moment. Sansa, when the HBO series started, was the decorous, daydreaming daughter of Ned and Catelyn Stark, one who seemed likely to marry the heir to the Iron Throne and become queen of Westeros. And Ramsay Bolton was once Ramsay Snow, a nearly forgotten bastard adopted formally after his father Roose (Michael McElhatton) asked for a special favor from Tywin Lannister. And why did Roose Bolton think he could do that? Oh yes, because he killed Sansa’s mother and brother, as well as most of the fighting staff of Winterfell. Now the Boltons hold Sansa’s former home, and want to secure their position as overlords of the vast North by marrying into the family that has ruled the North for, lore has it, thousands of years.

In the books, Sansa and Ramsay Bolton never meet; instead, the Boltons plan their marriage with a girl who Tywin Lannister claimed was Arya Stark, but is in reality a childhood friend of theirs, Jeyne Poole. It’s a fascinating meditation on how identity is a fluid category that can be unmade and rebuilt in a world without photographs, fingerprints, or facial recognition software. It’s also a stunning callback to a minor character from the first book, one whose proximity to the Starks becomes both a liability and an asset. But it is convoluted. I don’t know what George R.R. Martin had planned for Sansa, but in the fourth and fifth books, her plotline shrinks in significance, as Littlefinger (played in the series by Aidan Gillen) keeps her captive in the Vale. She never, as happened in last week’s episode, runs into Brienne of Tarth (Gwendoline Christie) in a crowded pub. Sansa of the books has been half-terrorized, half-brainwashed into believing that no one knows, cares, or can find her.

With this rewrite, Sansa’s story, like the character herself, emerges from the shadows. Alayne Stone, the pseudonym Sansa lived under while she dyed her hair and wore layers of black, will be put aside as she steps back into her given identity. This version offers her a lot more agency—to Brienne, Sansa chooses to stay with Littlefinger, which is not an option in the books. And Littlefinger himself offers Sansa some kind of choice when he presents her with the possibility of a calculated marriage, in the first few scenes of “High Sparrow.” In the books, Sansa’s captivity renders her nearly docile, as she is forced into compliance. In the show, Sansa’s captivity has become something she is embracing with open arms. Because marriage to Ramsay Bolton isn’t freedom: It’s a tactic that will require the violation of her body, in a larger, unformed strategy that doesn’t wholly belong to her. In book and show, though, one thing is clear: Sansa is becoming comfortable with her prison—and her warden. In “High Sparrow,” Littlefinger reaches up and touches her cheek, telling her, with mingled passion and concern, that he would never let anything happen to her. She appears to believe him.

Stockholm syndrome is not a psychological disorder that is recognized by the DSM, the tome that is the defining text of modern mental illness. There is very little academic research conducted on the topic, and at least some of that research is attempting to determine whether or not such a syndrome truly exists. Per the New Yorker:

The term was coined, in 1973, by a Swedish criminologist who was trying to explain the behavior of four bank employees taken hostage in a robbery. During their six days in the bank, they had talked with the robbers, who had not harmed them. One hostage reported being more afraid of what police officers might do when they broke in.

Patty Hearst, whose 1974 kidnapping when she was just 19 led to her transformation from heiress to radical operative, is sort of the patient zero: Months after her abduction, Hearst was caught on tape participating in a bank robbery, wielding an automatic weapon. She was found guilty of bank robbery; the court believed her to have turned from a captive to a sympathizer.

Since then, it’s become a term used with abandon by the layman—One Direction even sang a song about it. It’s a blanket term stuffed with connotations that can be fired off in just two words, indicating masochism, mistreatment, and hate turned to love. Hearst was subject to beatings, rape, confinement, and starvation; after she was returned to police custody, she had significant signs of trauma, including memory loss, nightmares, and drastic weight change. The tossed-off Stockholm syndrome begins to feel a bit inadequate. After all, its implication is a little startling: Not only can women be forced to comply with external demands—they can also grow to like it.

In that same New Yorker article, author Margaret Talbot quotes Natascha Kampusch, who was kept captive in a basement for eight years:

… the Stockholm-syndrome diagnosis “turns victims into victims a second time, by taking from them the power to interpret their own story—and by turning the most significant experiences from their story into the product of a syndrome. The term places the very behavior that contributes significantly to the victim’s survival that much closer to being objectionable. Getting closer to the kidnapper is not an illness. Creating a cocoon of normality within the framework of a crime is not a syndrome.”

Sansa Stark has stood out for being a character that does not often get the privilege of a point of view in knight-and-dragon stories. Courtly romance, from the knights of the Round Table down to “Lord Of The Rings,” requires long-haired, peerlessly beautiful maidens for our heroes to pine after and win the hands of. But they frequently have less personality and agency than the furniture. The Lady of Shalott pines to her death; Guinivere and Morgan Le Fay largely distinguished themselves for sleeping with the wrong men; and Aragorn’s queen Arwen was invented when Tolkien realized he needed some elf-maiden to weave the banner that Elrond wraps around Andúril. The women who got personalities were the ones that picked up a sword and/or wore pants, to act like men—Eowyn, Robin Hood’s Maid Marian, and their modern-day sisters like Alanna of Trebond (from the Tamora Pierce novels), Aerin Firehair (from the Robin McKinley novel “The Hero And The Crown,”), and of course Arya Stark, Sansa’s own sister. The courtly ladies are fixtures of the status quo; the pants-wearers are the misfits and the rebels. Martin, in “A Song Of Ice And Fire,” cannily builds Sansa as a character who reads all the old tales of knights in love with beautiful ladies. She is frustratingly naïve, but also innocent in the exact way that her world has asked her to be.

In that way, she is a fantastical stand-in for the overwhelming number of girls that are disappeared, in some way, in our world: Elizabeth Smart, Jaycee Lee Dugard, Michelle Knight, Elisabeth Fritzl, and no fewer than 200 girls from Chibok, in Nigeria. Sansa’s story is made up from pieces of these real-life ones. Like Elizabeth Smart, she’s forced to change her appearance (specifically her hair and clothing); like Dugard, the man who holds her captive alternates between fatherly feelings towards her and sexual ones. Like Kampusch, her captivity (so far) is largely devoid of sexual abuse. “Game Of Thrones” spins stories about an imagined place and time, but its concerns necessarily mirror our own. And in this world, we struggle to adequately protect, prepare, or avenge our young women. Instead what we have to offer them is “Stockholm syndrome.”

In the books, the reader is privy to Sansa Stark’s thoughts: Each chapter is narrated from a character’s point of view, and Sansa is one of those privileged few who gets a perspective. In the show, because of the nature of television, Sansa keeps her own counsel. On the eve of her engagement to Ramsay Bolton—even if, as her serving woman tells her, “the North remembers," even if the man that was once Theon is waiting in the wings, even if Littlefinger is watching her back—Sansa is now facing a life where she will be raped, daily. It’s a choice, of sorts, made between one bleak prospect and another. We, the audience, do not know exactly what she is thinking. But I would not be surprised to hear her echo Elizabeth Smart, as she rejects the notion of Stockholm syndrome. “Everything I did I did to survive.”