George W. Bush is back, and he's concerned that the foreign policy catastrophes he helped create aren't being fixed 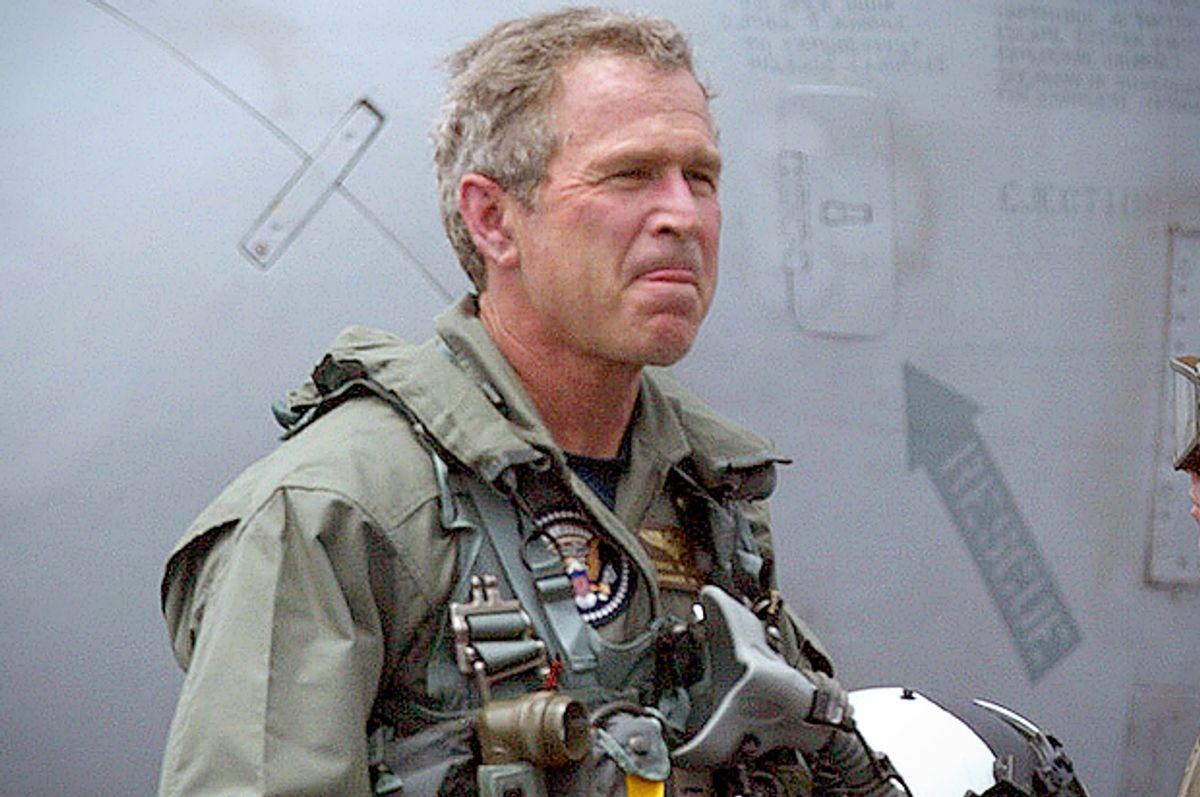 Arguably the best thing George W. Bush ever did for his party was to keep quiet in the years following his presidency. Winning elections in a political environment shaped by Bush’s legacy – a bloody and unpopular conflict in Iraq and a cratering economy – was difficult enough. The last thing Republicans needed was W. out in the public eye smirking and drawling about staying the course. So he exiled himself to the ranch in Crawford and took up painting.

But Bush’s political hermit act couldn’t last forever. His brother’s likely entrance into the 2016 presidential race guaranteed that we’d hear from him sooner rather than later, and it’s only natural that after years of self-imposed silence, Bush would feel the urge to get out there and talk politics again. And so this past weekend, Bush spoke to a Republican donor conference in Las Vegas about the Middle East and served up some harsh critiques of his successor’s foreign policy. It was classic Bush, in that he seemingly refused to consider for even a moment that much of what we’re dealing with in the Middle East are the unintended consequences of his own epic policy failures.

According to a transcript of Bush’s remarks provided to Bloomberg’s Josh Rogin, Bush came down hard on Barack Obama for ruining all the good work he and his administration had done in Iraq:

Bush then went into a detailed criticism of Obama’s policies in fighting the Islamic State and dealing with the chaos in Iraq. On Obama’s decision to withdraw all U.S. troops in Iraq at the end of 2011, he quoted Senator Lindsey Graham calling it a “strategic blunder.” Bush signed an agreement with the Iraqi government to withdraw those troops, but the idea had been to negotiate a new status of forces agreement to keep U.S. forces there past 2011. The Obama administration tried and failed to negotiate such an agreement.

It was a “strategic blunder,” according to Bush, because he’d made everything right in Iraq with the surge, which he offered up as a great example of commander-in-chiefing: “When the plan wasn’t working in Iraq,” Bush said, “we changed.”

That’s a sanitized retelling of how the surge came about. The “plan” in Iraq had not been working for years, as evidenced by the ever-rising death tolls of American troops and Iraqi civilians. But Bush, as you might recall, was something of a stubborn man, and he stuck with the “plan,” insisting all along that it was working, even as the country fell apart before our eyes. Also, anyone who questioned the “plan” was immediately slimed by Bush, Karl Rove, and/or Dick Cheney as a traitorous, terrorist-appeasing, cut-and-run coward. The surge happened in 2007, four years after the war had begun and shortly after the political damage wrought by “staying the course” had cost the Republicans control of Congress in 2006.

And the surge itself failed to accomplish its primary goal of enabling political reconciliation amongst the factions within the Iraqi government. The regime the Bush administration left in Iraq was hopelessly corrupt and presided over by a wannabe authoritarian strongman who repressed Iraqi Sunnis to consolidate his own power. But according to Bush, forcing the Iraqis to agree to a residual force of a couple of thousand U.S. troops would have kept the sectarian government in line and kept a lid on the violence – a fanciful notion that was contradicted by the entire history of the Iraq war up to that point.

Bush also had a few words on the bad hombres of the Islamic State:

Bush said he views the rise of the Islamic State as al-Qaeda’s "second act” and that they may have changed the name but that murdering innocents is still the favored tactic. He defended his own administration’s handling of terrorism, noting that the terrorist Khalid Sheikh Mohammed, who confessed to killing Wall Street Journal reporter Daniel Pearl, was captured on his watch: “Just remember the guy who slit Danny Pearl’s throat is in Gitmo, and now they're doing it on TV.”

The Islamic State and Al Qaeda are actually two distinct entities who don’t like each other all that much, but if we must go by this dodgy framework, then the Islamic State is actually Al Qaeda’s third act. The first act was just plain old Al Qaeda. The second act was Al Qaeda in Iraq, which didn’t exist until George W. Bush invaded Iraq and gave regular Al Qaeda the chance to set up a new franchise. The Islamic State grew out of Al Qaeda in Iraq, and the group’s sophistication owes much to the fact that the Bush administration disbanded Saddam Hussein’s army and made freelancers out of Hussein’s intelligence officers, who took their talents to the various jihadist movements.

Anyway, one could go on and on in this vein. It’s silly to think that Bush would ever cop to the enduring failures of his disastrous Iraq adventure, but he at least had the good sense to keep his mouth shut. Now he’s out there defending the Bush record and letting it be known that he’s very concerned about how all the catastrophes he helped author are playing out.