A skeptic reconsiders Blur: "The Magic Whip" could be their “White Album”

In which a longtime holdout finally gives the Brit-poppers, back from a 12-year hiatus, the fair shake they earned 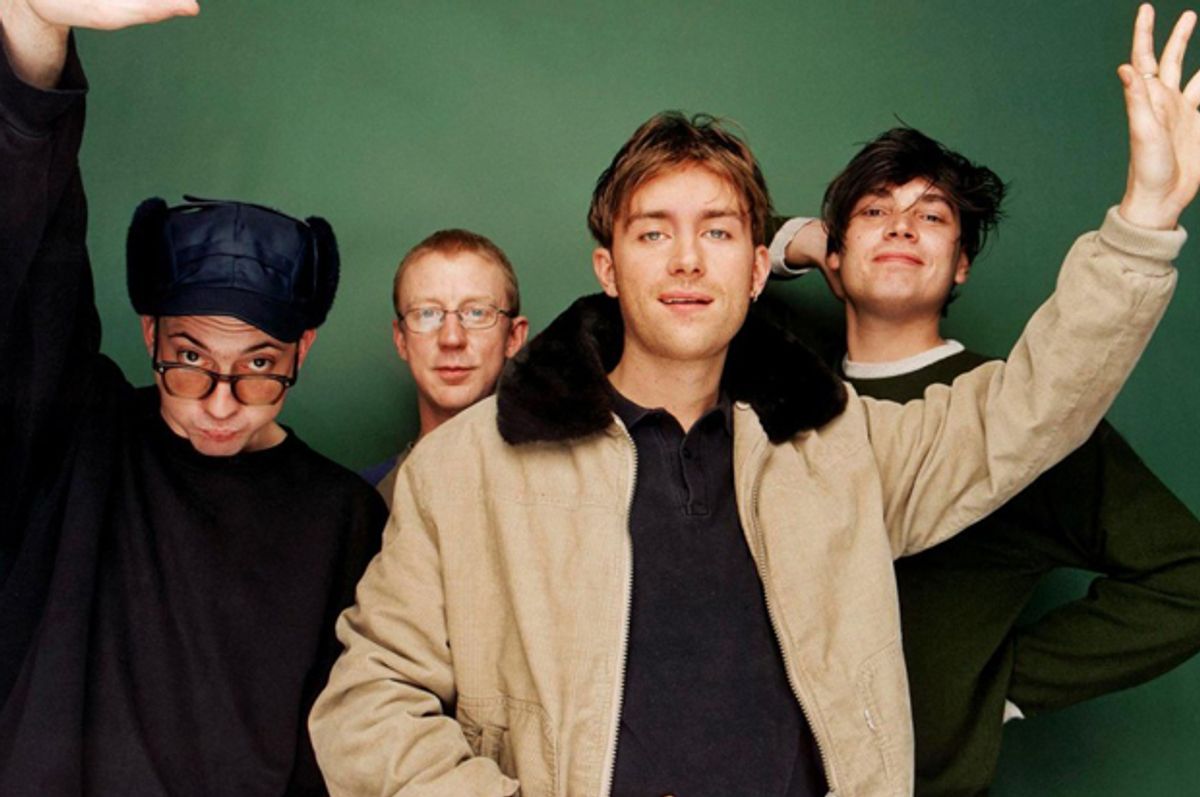 It took me a hell of a long time to become a Blur fan. Even if you asked me a year ago to cast my lot in about the Blur vs. Oasis feud of the mid-'90s, I would've said the Gallaghers win by a mile. I never hated Blur, certainly never thought of them as male Spice Girls who played their own instruments — I swear. Okay, maybe for a few weeks. My minimal listening just always led me to conclude they were too goofy for their own good. When their first album in more than a decade, "The Magic Whip," was announced, I decided to give them the fairest shake possible.

Upon listening to the entire discography, it became apparent I made what I like to call a "Devo error." That's to say, I misjudged a band's artistic credibility and creativity on the basis of one or two novelty (some might say cheesy) singles. Devo has "Whip It," The B-52s have "Love Shack," and Talk Talk has "It's My Life" — but all those bands also have remarkably consistent material as a whole, if you just give them the time they deserves. Blur's ubiquitous singles are "Song 2" and "Girls & Boys," but they're just drops in the well of a pretty inventive set of songs stretched out over their initial twelve years as a band. As a band, they're well worth your time, and they may even be one of the best bands to come out of the Nineties. And what I've discovered is that album-for-album, they are better than Oasis.

But even if the band is more valuable than their one or two catchy hits, it's still hard to figure out how valuable they are. To use a Beatles/Stones classics litmus test, Blur's career is built on songs of the "Can't Buy Me Love" and "Under My Thumb" caliber. If the Beatles or the Stones didn't end up with an "Abbey Road"and an "Exile on Main Street," you have to wonder if they would be considered as innovative and as lasting as they are. Blur's "Parklife" is their most popular album, and it's roughly of the same pop-rock caliber as "Help!" In other words, their best-known work is still not quite even a "Rubber Soul." Imagine the Beatles stopping at the same time most people think of Blur stopping: at the point where they were still just a really great pop rock band who were yet to experiment. They'd be considered just as much a playful diversion as Blur, not the geniuses they were.

Given that the most famous rock band in history didn't start recording the records still topping music magazines' critical lists until the middle part of their career, shouldn't the same opportunity be afforded to an extraordinarily popular British band who came on the scene roughly thirty years later? When you really give Blur a chance, it becomes apparent the band's catalog is worth your time. Noel Gallagher once boasted that the Beatles' first two albums weren't as good as Oasis' first two albums. (Unfortunately for him, most people's albums are better than every Oasis record after the second.) Blur, however, built a career that steadily climbed upward to greater heights of innovation. Is it better to burn out or fade away? Albarn, Coxon and company answered, "Why do either?"

The Blur most people criticize isn't even the one that first debuted in 1991. Their first album "Leisure" met with mixed reviews from the press, but its worst critic is front man Damon Albarn himself. He thinks it's awful — but it's really not that bad. Is it a bit derivative of the trends of the time? Certainly. It's a respectable attempt at a wall-of-sound shoegaze album which unfortunately came out the same year as two of that genre's pinnacle records, My Bloody Valentine's "Loveless"and Slowdive's "Just for a Day." In the midst of all that beautiful noise, it's somewhat forgettable. But since Blur is a band well aware of their mistakes, they counted it as a misfire and switched teams. Instead of sitting on the bench for shoegaze, they became one of Britpop's starting players.

The cover of their second record, 1993's "Modern Life is Rubbish," depicts a moving train — fitting given how much this record did in terms of speeding the band forward. This is the record that converted me into a full-fledged Blurist, and if you grew up listening to at least one or two Kinks records, it should do the same for you. Before they established themselves as the biggest name in Britpop, they proved they knew their Britrock. Graham Coxon's guitar playing is never better than it is here, and Albarn's melodies share the same genetic coding as the best accessible punk songs by The Jam and Buzzcocks from decades earlier. Is it pop-rock? Yes. But the rock side of things is still preeminent.

1994's "Parklife" is where they took on the sound for which they're most known. It's a vaudevillean, bright and silly record, keen on the kind of British pride but nevertheless could still satirize the England of their day. "Girls and Boys" opens the record with a thumping dancebeat synth sure to alienate more pretentious listeners immediately, and if that track doesn't appeal to you, neither will anything else on the album. It's an emphatically uncool and almost comically upbeat record. But it sold well, pretty much on the basis of how fun it is to play in your car and sing along to. The choruses to the title track and "Tracy Jacks" are some of the catchiest ever written, and the Bacharach-meets-Beatles ballads "Badhead" and "To the End" possess a lilt that'll work wonders on you if you can get over the schmaltziness. It's like "Magical Mystery Tour," devoid of psychedelic excursions. There's no "I Am the Walrus" because the whole thing is one long leisurely drive down "Penny Lane."

The same goes for 1995's "The Great Escape." When it came to giving the record a name, Albarn told BBC Radio, "We've been trying to get life into it, but nothing was very good - Wifelife, Darklife, Nextlife." All those titles probably would've fit better than the one they settled on, since its playful pop sound doesn't really escape from anything. Given how much it sounds like its predecessor, the most apt title would have been "Parklife, Part 2." Despite Albarn insisting that it's "messy" in hindsight, the songs here are as punchy, if not more so, than the ones that came before. (See: "Stereotypes" and "Charmless Man," etc.) At this point, the band was less interested in exploration than they were in mastery. If they were going to write pop songs, they were going to write the best ones possible — and they did.

Their self-titled album came out in 1997, the same year Princess Diana passed away. With her went the best years of recent English rejuvenation and, thus, so did Britpop. Even if "The Great Escape" featured their first #1 single, "Country House," and their success was beginning to decisively surpass that of their mortal rivals, Oasis, Blur tired of being poster boys for the scene which propelled them to the front lines. "Blur" is a record devoted to subverting and injecting the American alternative rock bloodstream, which produced the likes of Nirvana and Pavement, with a decidedly sarcastic and British sensibility. Everything about the record is crunchier and darker than they'd ever even hinted at before. "Song 2" may be their song every person with a stereo knows, but if you heard it on the radio when it premiered, you would've been shocked when the DJ came on and named the group behind it.

It's with their last two records Blur decisively cemented themselves as musical visionaries. 1999's "13" opens with the seven minute long postmodern gospel song "Tender" and it may be their best track ever. Their previous ballads occasionally teetered towards insincere cheesiness but this is a slow-paced song as simple and authentic as they come. "13" experiments with heavier sounds, more exotic instrumentation, bizarre song structures. It raises the question: if they could make a record as compelling and creative as this, why did they spend so much time writing pop records? (Well, they were great at them — but they were great at this too.)

Until "The Magic Whip" was announced, "Think Tank" was Blur's end-of-the-line. Coxon wasn't as involved and his absence is a clear deficiency but the rest of the group made something lasting and powerful, even deprived of his wizardry. It's a moody, dark, intriguing record; the two divers on the cover, hidden eyes locked, are an indication of how submerged the sound gets without ever becoming murky. If Blur should be compared to any band, it's Talk Talk. They may not sound that similar, but their journeys are almost identical. They made waves on the radio as hyper-aware popsmiths, only to leave the comfortable home they'd built for themselves to explore territories likely to alienate more casual, less forgiving fans. Like Talk Talk's "Spirit of Eden" and "Laughing Stock," Blur's "13" and "Think Tank" are wholesale abandonments of pop's comforts, legitimized by the bizarre and nearly spiritual treasures they turn up in their hunt for new, uncharted geography.

Blur hasn't put out an album for as long as they were a band initially — they had twelve years on and took twelve years off, if you don't count their occasional live performances. The members undertook different musical projects in the meantime, and there's never really been a mediocre release from any of them since the band broke up. Not to mention, the new singles from "The Magic Whip" are suggestive of a record which will include the best elements of their more experimental and more accessible music all in one. "My Terracotta Heart" calls back to the occasional balladry of "Parklife," "I Broadcast" to the wild rock of their self-titled and "Go Out" to the moodiness of "13" and "Think Tank."

Everything that ever made them great is ready to turn up for the role call, all while owning up to a distinctively updated and modern character. Blur never really had a "White Album," a mishmash of different styles and experiments, until now. As the band reunited and recorded, they knew looking backward was as important as looking forward. Here's hoping they keep heading up and, this time, with the full amount of respect they deserve.