Right-wingers will believe anything about Harry Reid, which makes for some excellent pranking opportunities 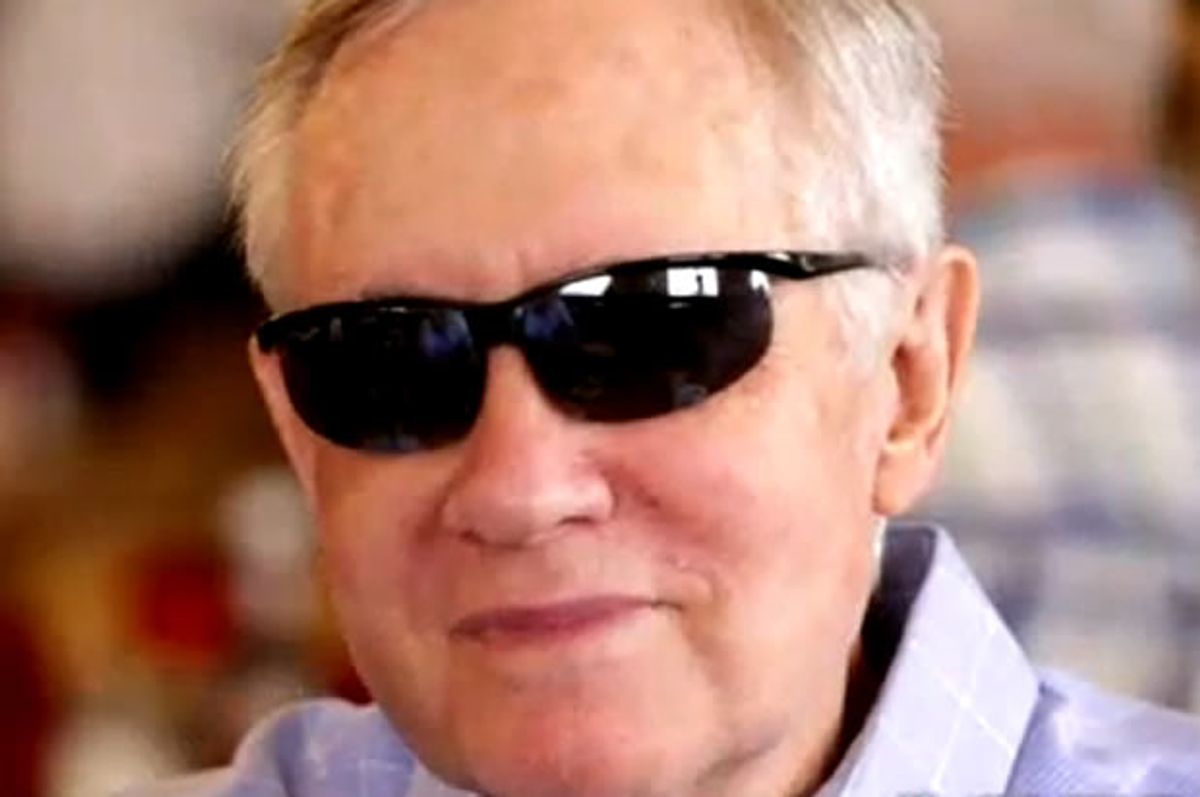 We return to the saga of WHAT REALLY HAPPENED TO HARRY REID (MUST CREDIT CONSERVATIVE BLOGOSPHERE) only because of dramatic new developments that turn this whole story on its head. THE LATEST DEVELOPMENT: All those other developments that circuited through conservative media were not true, according to the guy who made them up for his own amusement.

Earlier this month, we wrote about longtime conservative blogger John Hinderaker's gumshoe efforts to expose the truth behind the injuries Harry Reid suffered on New Year's Day. Reid claimed he injured himself using exercise bands. Since John Hinderaker does not like Harry Reid and has stereotypical impressions of how Nevada politics works, he determined that Reid was lying.

Hinderaker first asserted that "it isn’t hard to guess that [Reid] ran afoul of mobsters." Later, a friend who had just visited Las Vegas told him that, indeed, the Strip was buzzing with rumors that "Reid had promised to obtain some benefit for a group of mobsters." Reid was not able to obtain that benefit, alas. "When the mobsters complained, Reid (according to the rumor) made a comment that they considered disrespectful, and one of them beat him up." The part about Reid making a disrespectful comment sounds about right, but little else of this story rested on a solid evidentiary basis. The sourcing -- hot rumors going around Las Vegas!!! -- sounded a lot like, say, "No one in Wasilla thinks that Trig is really Sarah Palin's kid." Regardless, it was good enough to get some attention from Hinderaker and prompt a further comical exposé at Breitbart News.

Since our last posting, Hinderaker has been running with another story. A man operating under the pseudonym "Easton Elliott" presented him with a story that did not involve mobsters, but did involve Harry Reid's brother, Larry. Elliott shared with Hinderaker a story about a New Year's Eve meeting of Alcoholics Anonymous he had attended. (You can tell you're dealing with a noble source if they're divulging conversations from an AA meeting.)

Some time between 10:00 and 11:30 p.m., a man entered the meeting. His appearance was striking: there was blood on his clothing, beginning around his midsection. His left hand was swollen. He appeared to be somewhat intoxicated and was visibly agitated. He introduced himself as “Larry.”

In a group discussion that was heard by a number of people, Larry said that he had just had a fight with a family member. Larry said he had been at a family get-together, and he didn’t remember much about the fight because he had blacked out. When he came to, he was rolling on the ground, fighting with a family member, and his clothes were bloody. Now, he said, he was frightened that the Secret Service would come after him.

It took Elliott a little while to put together, but he eventually figured out that this was Larry Reid and he had just come from a fight with his brother, Harry. "That is Easton Elliott’s account," Hinderaker wrote. "I can’t vouch for it, of course, but if what he says about the AA meeting is accurate, the inferences he draws seem reasonable." For the uninitiated: this is called the Whoa, if true method of hedging when you're publishing an uncorroborated rumor about a public figure.

You can't make up a story like this. Just kidding, you can, and now that's what "Easton Elliott" -- real name Larry Pfeifer -- is claiming he did, just to see how far it would go. Pretty far, Larry!

A Las Vegas man claims he started a false rumor that the injuries suffered by Senate Minority Leader Harry Reid several months ago were the result of an attack by Reid’s brother, not an exercise accident.

Larry Pfeifer, a 50-year-old former consultant in the nightclub and entertainment industry, said he fabricated the story after becoming appalled that right-wing political blogger John Hinderaker published a rumor that Reid’s injuries stemmed from an assault by a Mafia enforcer. Pfeifer said he pitched his fake story about the Reid brothers’ supposed fight to Hinderaker, author of the Power Line blog, to test whether the blogger would publish it, as well. When Hinderaker reported it and the rumor was subsequently spread by others in conservative media, Pfeifer says he began plotting to self-report it as a lie to show the lack of credibility and journalistic standards among partisan media figures.

“It was just so outrageous,” he said. “The fact that someone can say something completely false that can destroy somebody’s life, it’s just wrong. Where’s the moral compass?”

Pfeifer may think that he's taken conservative media for a ride here. All he's really done, though, is open an opportunity for mobsters to be reintroduced to the story. I'm not sure it's happened yet, but it's only a matter of time before Breitbart or World Net Daily takes this fabrication to its next step: Pfeifer ran afoul of the mobsters who run Alcoholics Anonymous in Las Vegas, and they forced him to recant his story. (Is Thomas Pynchon looking for an idea for his next novel, by any chance?) The story about WHAT REALLY HAPPENED TO HARRY REID is far from over and new theories will arise as old ones collapse. Don't bother keeping up with the minute-by-minute fluctuations, reader. We here at Salon will write about this once a month or so to keep you updated, until the end of time, because that's just the kind of people we are.