Marriage equality is only the beginning: As SCOTUS prepares to make history, here's what's on the horizon for LGBTQ rights

The fight for equal marriage is a worthy one. But it's far from the last front in the fight for LGBTQ equality 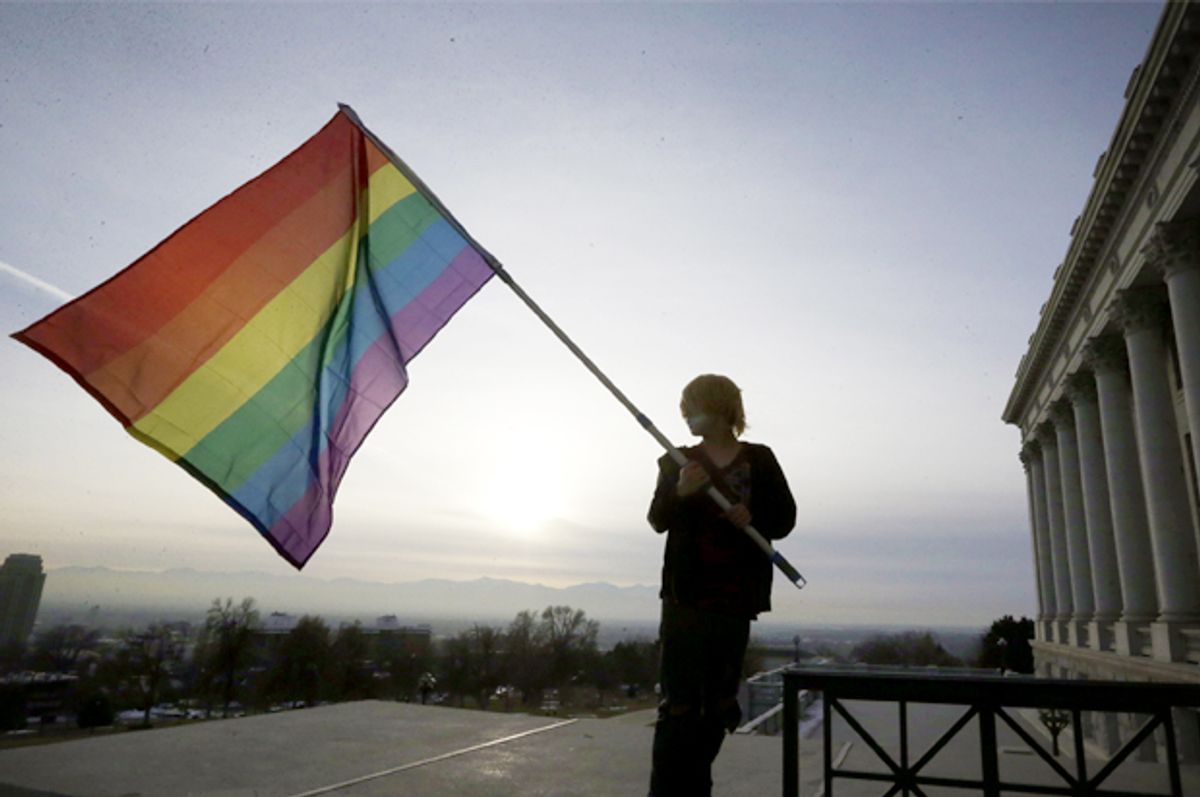 The Supreme Court on Tuesday will hear 2.5 hours of oral arguments that may very well determine the fate of marriage equality in the United States. There is an incredible amount at stake in the four cases being reviewed by the court, the historic and emotional culmination of a decades-long struggle to secure equal marriage for gay and lesbian couples. But significant as the decision may be, a victory for equal marriage would be a narrow win in the broader landscape.

So what does the movement for LGBTQ justice look like if the marriage question is finally settled? Remarkably similar, since many of the kinds of discrimination LGBTQ people currently face will remain unaffected by the change. This is particularly true for the decisions we tend to associate with getting married, like where to live, where to work and how to support a family.

A 2013 report from the Department of Housing and Urban Development documented widespread discrimination against gay and lesbian couples in the rental market, even in places with laws prohibiting such discrimination. The HUD report found that gay and lesbian couples were “significantly less likely” than their straight peers to hear back about rental inquires when they listed themselves as a couple, despite the fact that their applications were identical in every other way.

“Comparing our gross measures of discrimination, heterosexual couples were favored over gay male couples in 15.9 percent of tests and over lesbian couples in 15.6 percent of tests,” according to the report. The survey was the first of its kind, analyzing nearly 7,000 email exchanges sent across 50 metropolitan areas.

"We had a married couple, Christina and Jonathan, ask if a one-bedroom apartment was available. A short time later, an email was sent from Mark and Thomas, clearly identifying themselves as partners, inquiring about the same apartment," said former HUD Secretary Shaun Donovan. "At 2:20 p.m., the rental agent responded to Jonathan and Christina, saying the apartment was still available, and providing his phone number to schedule an appointment. Just one minute later, the rental agent replied to Mark and Thomas, saying, 'I think I have it rented. But I can check back in a day or so.'"

While 21 states and a patchwork of municipalities ban anti-LGBTQ housing discrimination, the Federal Fair Housing Act has nothing to say about it. The Supreme Court may very well find that there is a constitutional right to marry, but such a ruling would do nothing to prevent landlords from denying newlyweds housing in the 29 states where such discrimination remains entirely legal.

This kind of discrimination is widespread, but it's also only one facet of the problem. An estimated 40 percent of young people experiencing homelessness identify as LGBTQ, and another study found that 78 percent of LGTBQ youth in New York foster care placements either ran away from or were removed from their new home due to a conflict related to their sexual orientation or gender identity.

For young people, being LGBTQ means you are more likely to become homeless and less likely to receive the kind of care and services you need when seeking alternative housing. And yet a report from the Center for American Progress found that less than 1 percent of a $44 billion federal budget for rental assistance, public housing and affordable housing programs went toward housing assistance for youth experiencing homelessness.

Employment discrimination is equally widespread and poorly addressed by existing law. In 29 states, your boss can fire you for putting your wedding photo on your desk, and there is nothing you can do about it. The Employment Non-Discrimination Act spent two decades languishing in congressional purgatory, but it wasn't just conservative intransigence on a vote that doomed the bill. The measure also contained broad religious carve-outs, and, in the wake of last year's sweeping Hobby Lobby decision from the Supreme Court, a number of progressive and LGBTQ groups withdrew their support, noting that the bill would not serve its intended purpose if businesses could opt-out with a claim about religious freedom.

“The morning the sun rose after the Supreme Court’s Hobby Lobby ruling, we all woke up in a changed and intensified landscape of religious exemptions being used as an excuse to discriminate.” National Gay and Lesbian Task Force executive director Rea Carey wrote at the time in the Advocate. “The reality is that while politics is about compromise, some compromises are too great.”

In part because they are particularly vulnerable to employment discrimination, trans people, particularly trans women of color, are disproportionately likely to live in poverty. There is ample anecdotal evidence of the kind of employment discrimination that makes trans people's financial lives precarious, like the Texas high school teacher who was put on administrative duty after a group of local parents said they didn’t want her teaching their children because of her gender identity, but national surveys have also documented discrimination on a much larger, institutional scale.

A 2015 report from the Center for American Progress documented a “financial penalty” for being trans, not just because of employment discrimination but because of an overall lack of legal protections, laws that fail to recognize LGBTQ families and "hostile education environments" that leave trans people particularly vulnerable. The problem is only further compounded by rates of violence against trans people, discrimination in education and housing and unequal access to health services.

This is only a partial list of issues that remain urgent, and the ways that different forms of discrimination are linked. But none of these things disappear if the justices land on the right side of history when it comes to equal marriage, which is why the historic case -- important as it may be -- is really just the beginning.